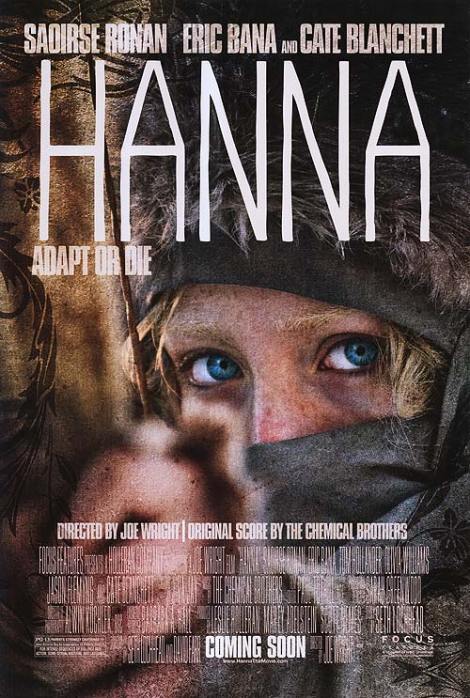 I was a little nervous about paying money to go see this movie, thinking that people might look down on me. Forget about everything you read about in the tabloids and all that controversy and bullshit, and I think the actress is extremely talented. Some might say “gifted”. Luckily, I was able to convince JD to come with me, which I thought was only because it was $4, but it turns out he also wanted to see it. What are the odds?! Another adult male interested in going to see this movie! Once the movie started, I realized it was NOT the Hannah Montana movie. Dammit. 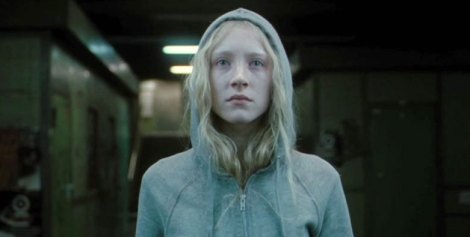 So THIS is what Anne Heche has been doing!

We first see Hanna, played by Saoirse Ronan, stalking a caribou or something in the arctic tundra, shoot it, then get attacked by Eric Bana, who plays her father. These two have been living in the woods for quite some time, and Hanna wants to go to civilization. He brings in a transmitter thing and tells her that when she wants to leave, just to hit the switch. When she does, some sort of government strike force team apprehends her and takes her into custody. Once in custody, Hanna attacks everyone and escapes, which starts lots of chasing and running and people being beat up. Hanna is trying to meet up with her father at the set rendezvous point, which is also where her father is trying to get to, and Cate Blanchett‘s character is trying to intercept them. Through all of this chasing, we learn that Eric Bana isn’t really her birth father, and that Hanna was genetically altered to be stronger and faster than other humans, also to be devoid of fear and pity. Hanna learns this and obviously becomes pissed at her “dad”, but it’s okay because one of Cate Blanchett’s henchmen stops him and kills him. Hanna gets back to the rendezvous point, followed shortly by Cate Blanchett, and they have a showdown that results in Hanna being shot with a gun and Blanchett being shot by an arrow. The arrow beats the gun, Hanna gets the gun, shoots her in the head, and then the title of the movie pops up onscreen, letting us know the movie’s over. 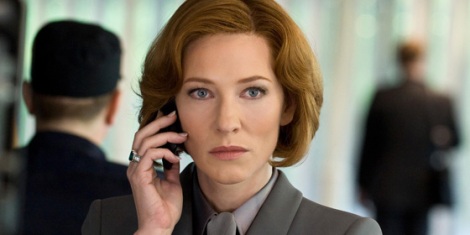 Blanchett in this movie was somehow equal parts Dana Scully and Jodie Foster from Silence of the Lambs.

In retrospect, I guess I left out the whole “coming of age” storyline that took place for a long period of time in the middle. So, let me say right now, there’s a big coming of age segment in the middle where Hanna meets a family and a girl her age and learns about friendship. I guess I didn’t include it because there didn’t end up being any sort of twist involving those characters as other movies might have done. Multiple times in the movie I was trying to figure out what influences the filmmakers had during production, just couldn’t quite put my finger on it. There were segments that reminded me of videogames, yet I feel as though it would cheapen the experience of this movie by saying it was “like a videogame”. There were scenes that were quite surreal, as well as shots and scenes that I can only describe as “hyper-real”, whatever that might mean. This hyper-realism was demonstrated in the way the movie looked and the way shots were constructed, and the surrealism came from the music in the movie. There were times where you couldn’t discern whether the music you were hearing was taking place in the movie, or if it was just the soundtrack, because of how effectively music was used. 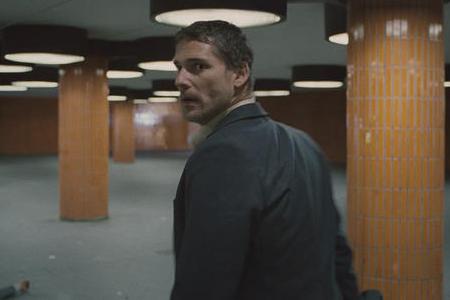 Eric Bana was pretty badass in this movie, I just kept looking forward to seeing him fighting everyone. Maybe I just couldn’t wait to see that strong jawline and all of his muscles rippling and….uhhh…I mean he was cool.

Both in the context of the movie and the subtext, there were a lot of references to fairy tales, and I feel that were I familiar with more of those stories, I’d be able to draw more direct comparisons. Early in the story, Hanna is seen to have kept a photo of her mother in a worn copy of Grimm’s Fairy Tales, which seemed to foreshadow the tone of the rest of the film. Multiple times throughout the film, Cate Blanchett’s character is referred to as a “witch”, and when Hanna and her father are supposed to rendezvous, they do so at an abandoned theme park that was styled after fairy tales. I can’t remember the name of the song, but when one of the characters put on a record with a piece of classical music that is almost cliché in its use of bringing tense situations, the music crescendos just as the “witch” arrives to confront Hanna. As well as a scene where Hanna is checking to see if the witch is outside, and when she draws back the curtain, she only sees the eye of the witch looking directly at her from behind a piece of shattered glass. This movie wasn’t your typical action film, based on its characters and the overall tone of the film, yet wasn’t quite unique enough to leave a memorable impression on its viewers. 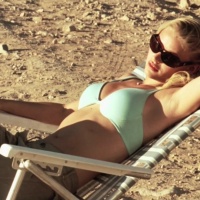 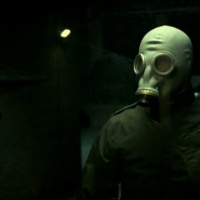