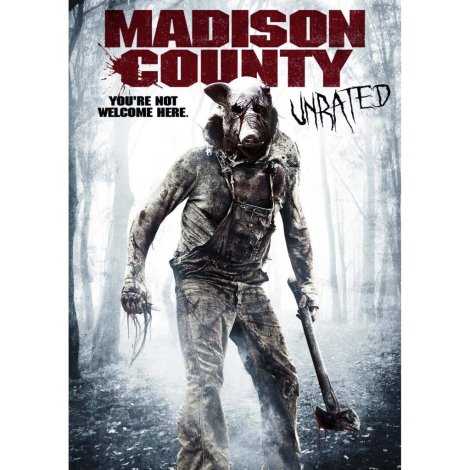 I’ve been waiting for YEARS to see how those goddamned bridges got into position and how they helped two old people fall in love. It wasn’t until there were ten minutes left in this movie that I realized this movie wasn’t a prequel to The Bridges of Madison County, but rather a horror movie about a small town named Madison County. Guys, couldn’t you have named it any other goddamned county to avoid confusion!? Something like “Fried Green Tomatoes County” or “Star Wars County”? THESE ARE ALL GREAT SUGGESTIONS! In all seriousness, I saw this poster a few times and thought it was pretty cool, and it’s a relatively new release that I wanted to share my thoughts on, but I don’t think I remember seeing any overwhelming positive reviews about it…..UNTIL NOW! Okay, not really that positive, but I felt like that sentence could’ve used an “UNTIL NOW!”

The film starts with a woman in her underwear trying to escape a bad dude, but the bad dude catches up to her! We then meet a group of college kids who are going to Madison County to investigate a mystery. Apparently there was a guy who murdered over 30 people in this town, and was the subject of a book written by one of the town’s residents, and that author was the contact for this investigation. When arriving in the town and stopping at a diner, no one acknowledges these crimes or offers any assistance. One of the college kids follows two babes through the woods, and when he is distracted with their skinny dipping, gets killed by someone wearing a mask made out of a pig’s head. The rest of the friends keep separating and getting killed, until the author shows up and seemingly offers to help one of the kids, but then bashes him on the head. The author’s daughter was taken captive by the pig masked guy, and the author tried to switch out the kid he knocked out in exchange for the daughter. Things don’t work out that way and the author gets killed, but the kid he tried to switch out is able to help the author’s daughter escape town. We see one of the friends was only injured, not killed, find her way back to the diner to get help. Whoops, I forgot to mention that at this point, the kids discovered that there was a woman who had married someone from out of town and they had a kid, and one day that kid was found beaten to within an inch of his life. The dad skipped town, as he was the one to blame, so ever since then, the townsfolk kill any outsiders that stop by, and the guy in the pig mask is the grown up version of the kid who was beaten. Anyways, this friend goes to the diner, we learn that the lady running the diner was the murderer’s mother, and the movie ends with the promise of getting this friend some help. There’s also a zoom in on the pig head mask guy before the credits start! Whoa intense!

Oh shit, just remembered the scene where she is being chased through the woods, and crouches down behind a tree as a hiding spot. SMOOTH MOVE, EINSTEIN.

There were two things I liked about this movie, but other than that, it was pretty forgettable. The first thing was that when the kids were on their way into town, a stranger offered them advice on how to get to that town a little more quickly. When approaching that shortcut, the driver completely ignores it, as he doesn’t trust the stranger. Good job! Maybe it was because I just watched The Hills Have Eyes and they had only gotten into that situation because of the advice of a stranger, I was glad to see that this movie didn’t…(wait for it)…GO DOWN THAT ROAD. Haha, nice one. The other thing I liked is that towards the end, as the one friend is escaping with the author’s daughter, we see them drive to an intersection and take a right. The film then cut to the friend who survived at the end walking down a road, and we saw that car drive the OPPOSITE direction of the friend who survived. Would’ve been a little too convenient to drive past the remaining friend, but was a fun little “Oof, so close!” moment for the viewers. Other than those two moments, it was a pretty stereotypical slasher storyline with enough twists to keep you interested in what was going on, but not enough unique stuff to stand out against the masses.