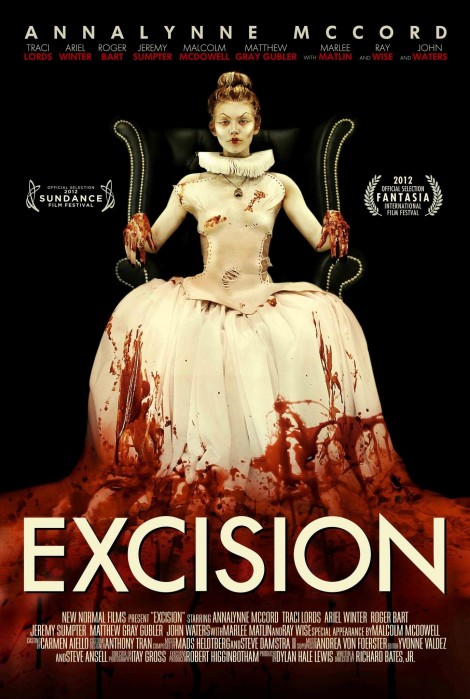 Although I knew barely nothing about Exicision before going into it, I was excited to see it because I knew that it had been playing at a bunch of festivals and it was grossing people out. Also, it was having a Chicago theatrical premiere that I was able to go to, so I thought I was one cool dude! Little did I know that this “premiere” was happening only a few days before it was being released on home video and had I just waited a few days then I wouldn’t have had to stay up late. Another interesting thing about this movie is the fact that “excision” is a real word! Did you guys know that?! I thought it was just a word meant to sound creepy, but just like when I saw Insidious, through text messaging I learned that those aren’t just failed attempts at sounding cool, but words with real definitions. What am I trying to tell you?  I have no goddamned clue, I just got out of a 24 hour horror movie marathon and fried my goddamned brain.

Like most 18 year old girls in their last year of high school, Pauline (AnnaLynne McCord) she has troubles with boys, her family, and where her future is headed. Unlike most 18 year old girls, Pauline has sexualized dreams involving graphic, violent alterations of the human body. Unfortunately, those troubles with boys and her family gets in the way of pursuing what she realizes is her destiny, which is becoming a surgeon. She decides she wants to lose her virginity, but does so through enticing a boy to cheat on his girlfriend, causing a serious of escalating encounters with the girlfriend that causes Pauline to get expelled. Pauline’s mom (played by Traci Lords) is very religious and just can’t seem to understand why Pauline can’t be more like her well-behaved sister, and considering her sister needs a lung transplant, wishes Pauline would stop taking her life for granted. No longer being able to pursue her destiny in school, Pauline takes it upon herself to find other ways to practice her surgery skills, whether it be on herself or dead animals she finds. When Pauline’s sister’s health takes a rapid decline, Pauline feels that she has no other choice than to put her skills to the test, but is she serious enough about her craft to pull it off or is her “destiny” nothing more than a deadly hallucination?

Wait…so is she, like, making tea or something? The bathroom seems like a gross place for that.

In case that plot sounds relatively tame, I should point out that interspersed with the narrative are the graphic hallucinations that Pauline is having, which are pretty fucked up for you average person. Maybe it’s telling of where I’m at in my life that these hallucinations didn’t disturb me, but you’re not my therapist so let’s leave that discussion for another time. Some of the things that happen in these hallucinations involve vomiting blood, taking a bath in blood, cutting people open, ripping someone’s tongue out decapitations, and probably the most intense, Pauline giving herself an abortion, pulling the fetus out by the umbilical cord, and putting it in the oven until it explodes. I’m not trying to say that this shit is mundane or anything, but in the context of the film, with these events just being hallucinations as opposed to fitting into the narrative of the character’s, it was a little bit easier to stomach. Maybe it was because Pauline will snap out of these visions abruptly and the viewer wasn’t subjected to them for too long that made these segments more tolerable, or maybe it was because the viewer didn’t have to believe any of the character’s were actually fucked up enough to do those things, but if you can stomach what I’ve described, then the other 90% of the movie isn’t difficult to watch.

Yuck, I hope her flow isn’t this heavy EVERY month.

Another thing I knew about Excision before going into it was the cast, because it’s not every day that you look on a poster and see names like Traci Lords, John Waters, Malcolm McDowell, Marlee Matlin, and Ray Wise together. Granted, most of the names on the poster were in two or three scenes, but it was still fun to see these people pop up. Ray Wise plays the principal of the school and has two of the funniest moments in the whole movie, Marlee Matlin plays a guidance counselor who signs that Pauline and her mother make her glad she can’t hear, Malcolm McDowell plays a relatively normal math teacher, and John Waters plays the priest that Pauline is forced to talk to every week. Get it guys? John Waters, who is known for being kind of weird and eccentric, plays a priest! Guys, GET IT?! Even though John Waters did the same thing ten years ago, I guess people will still cast him against type and some people think it’s hilarious. Traci Lords actually did a great job as the mom and even though the character wasn’t something we haven’t seen before and was a relatively stereotypical conservative mom, I think Lords showed that she does have some acting chops and was in it for more than just the tongue in cheek factor that Traci Lords got her start with pornography. I didn’t know who AnnaLynne McCord was before the movie, which is a good thing, because I think she did a great job as Pauline. I feel like had I known she was in garbage like the Day of the Dead remake or the 90210 TV series remake, I would’ve formed a negative opinion of her, but she pulled off the awkward  uncomfortable in her own skin performance that I’m sure some other young starlets wouldn’t dare to attempt because they wouldn’t be considered a sex symbol anymore. Good job, Ms. McCord!

I would have done much better in my geometry classes had there been a girl covered in blood dancing in front of bar graphs.

Have you guys seen Lucky McKee’s film “May”? It’s about a girl named May (Angela Bettis) who’s kind of a weirdo or something and she works at a veterinary clinic and she ends up killing people and attaching their body parts together to make a friend. While watching Excision, I kept anticipating the credits popping up and saying “Written & Directed by Lucky McKee” because of how similar in story and tone it was to May. This isn’t meant to be a bad thing or anything, I thought that maybe Excision was fitting in with a bigger series of films involving troubled young women who were looked at as freaks by most people but eventually accomplished whatever weird or twisted fantasy that they felt they needed to do. Not only was the story similar in tone, but the music that was used and the whole look of the film seemed very familiar, and I thought McKee was returning to that filmmaking style. Instead, the credits popped up with “Written & Directed by Richard Bates Jr.“, and I have no goddamned clue who that is. This is his first feature and he set the bar pretty high for himself as both a writer and a director and I’ll keep my eye out on what he does next. Good news for Richard Bates Jr., not so good news for Lucky McKee for not really doing anything I’ve enjoyed since May. Despite what insane things you hear about Excision and even if those more graphic segments aren’t for you, the overall story makes witting through those segments worth it with a few strong performances and a sharp sense of humor.

There is a God
Last time I saw Hausu was halfway through a 24-hour horror movie marathon at midnight, dozing in and out of sleep. Guess it really is as wackadoo as I half-remembered it!
“Yes congrats on your #DayOfTheDead tv show or whatever but check out my #ReturnOfTheLivingDead tattoo!”
Carlson Young from #Scream: The TV Series has wanted to be killed on-screen since the end of Season 2. Does she want to appear alive in a #ScreamMovie to do battle with #Ghostface?