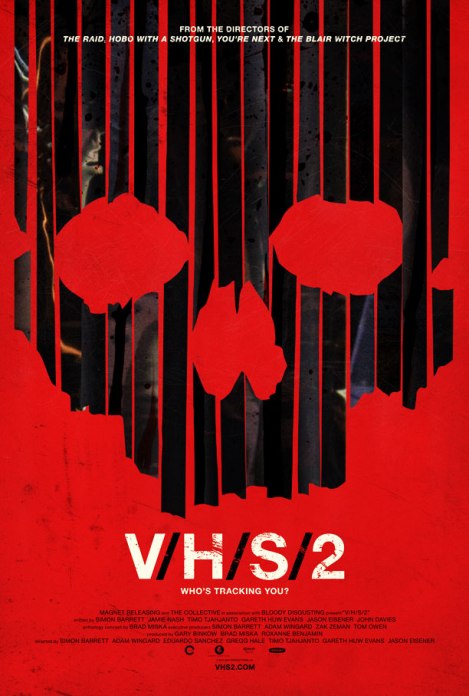 In case you forgot, I thought the first V/H/S was a ton of fun. Even though found footage horror movies have become so incredibly trendy, it was able to bring together some great current horror directors to do their own version of found footage and they did it in a way that make sense related to the story. Clearly I wasn’t the only one who enjoyed what they saw, although it’d be pretty cool if they did make this just because I enjoyed it. I should also mention that the film was originally called “S-VHS” to go in line with outdated movie formats, but considering other movies started getting made with similar titles, they ended up changing it to V/H/S/2. With the first film having debuted at Sundance last year and this film making its debut at Sundance this year, the V/H/S franchise is clearly taking over as an indie film version of Paranormal Activity, which I am just saying as a joke. Hahaha, get it? I’m telling jokes over here! Wolfman, you crazy. Similar to the first film, I’m going to review each segment on its own and then come back at the end to talk about the story that pulled them all together, just in case you’re a dumdum who couldn’t figure that out.

After an injury to his eye, Herman (also the director, Adam Wingard) has his eye replaced with a camera to restore his vision. Things seem to be going fine, but when he goes back home to his apartment, he starts seeing people in his house. A girl who had a similar procedure, but with her ear, comes to his apartment to let him know that he’s just seeing things that were already there, and it’s too late to go back. Whether he can see them or not, they’ll always be there, and spookiness ensues. In case the plot sounds similar to that of The Eye, well, I feel the same exact way. It was just a little too similar to that plot for my tastes, and even though this one did have a lot of humorous elements to it instead of taking itself incredibly scary, I still just wasn’t really all that into it. Coincidentally, it was the first segment of the previous film that I also wasn’t that into because of its similarities to other segments I’d seen in horror films. Weird! Also, I thought it was interesting that this one incorporated some sounds effects to heighten the scares, similarly to how non-found footage horror movies use those musical cues to heighten the scare, but more on that kind of stuff later. 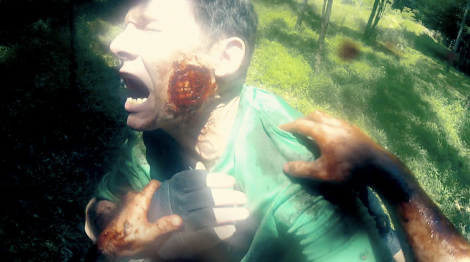 A Ride in the Park

While mountain biking through the woods and filming it with a camera attached to his helmet, a man sees a woman who looks to be quite injured. While trying to help, it’s revealed that the reason she’s injured is because she is turning into a zombie, but our mountain biker doesn’t realize this until it’s too late and becomes a zombie himself. We then get to see, from the zombie’s perspective, the trials and tribulations of what you do while you’re a zombie. Meet up with other zombies, try to attack people, get attacked yourself, pretty typical stuff.  I’d  say that this segment was definitely the most comedic of all the segments and wasn’t really intended to be scary, but it was still pretty fun to watch. The violence that we see if stuff that we’ve seen plenty of other times in zombie movies, but when we see it from the opposite perspective, it’s pretty entertaining.

A few documentary filmmakers are trying to learn about a guy who lives in a secluded house that is filled with women and young girls and the filmmakers want to know what the fuck he’s doing. While investigating this commune, the filmmakers start to think this guy is crazy, or at least, crazier than he was before actually going there. When it’s revealed that one of the filmmakers is pregnant, that’s when you realize the stakes are much higher and that maybe having her come to the commune was all part of a greater plan. Shit then really starts to hit the fan when the guy in charge kicks his plans into action, and, well, I’d rather you guys just see what that plan entails so I don’t ruin anything for you. This was easily the longest segment, coming in it around 35 minutes, which felt even longer because of how short the two previous segments were. That’s not to say that the length was bad, because there’s no way they could have fit all the stuff they did in this into a shorter story, but if you check your watch during this segment, no one will blame you. You guys know that I love cults and supernatural movies, so I thought this one was pretty fucking intense when things start coming together. It’s gory and graphic and just all kinds of fucked up. Although I would say that the last ten seconds could have been cut out for me to have enjoyed the film that much more, but mostly because budgetary limitations meant the effects in those last few moments were distracting in how poor they looked compared to the rest of the segment.

The name does kind of give away what happens, doesn’t it? Most of this sequence is shot from the perspective of a few kids having a sleepover at a house where the parents are away for the weekend so the kids are tormenting the older sister and her friends. Throwing water balloons at them, running in with strobe lights and boomboxes while the older kids are trying to have sex, all your typical slumber party stuff. Sadly, it’s not all fun and games for these wacky hooligans, as they’re all interrupted by incredibly loud noises, strange lights, and menacing creatures that start chasing them through the lake house. One of the things I’ve liked about all of Jason Eisener‘s stuff is the visual style as well as the choices he makes with music and sound effects. Although his visual style had some restrictions, having to rely only on one camera that’s meant to look realistic, he was still able to incorporate a little bit of visual flare in the sequences where the kids were harassing their babysitter. Eisener also managed to find ways to incorporate some terrifying sounds to indicate the arrival of the aliens, which felt like a nightmare version of the musical segments in Close Encounters of the Third Kind. He really succeeded in bringing fear into the concept of alien abductions and the terrifying randomness of that, which is something that’s been lost in movies for quite a few years.

The story that tied all of these sequences together was about two detectives trying to track down some “missing college students”, which brought them to the hope of the person who assigned the thugs in the original movie to track down the tapes. In addition to finding a stack of tapes that the female detective starts watching, we also see clips that the collector of these videotapes has recorded himself, talking about the reasons why these tapes exist and why he collects them. The more tapes the detective watches, the more disoriented she seems to become. As the story progresses, you start wondering what happened to the videotape collector and if the detectives are alone in the house. Whereas the wraparound story in the original movie seemed to only exist to set up the concept of the entire project, this story felt a lot more complete. In fact, the entire movie ended with the climax of this segment which tied everything together in a much more cohesive way then in the first film. There were some pretty cool effects, some decent scares, and a good amount of comedy, which comes as no surprise considering directing duties were Simon Barrett‘s.

So is it better than the original? Well, it’s a terrible idea to compare the two. Could you take Radio Silence’s segment from the first film and say you liked it better than Eduardo Sanchez and Gregg Hale’s? Sure, you could say that. I could also say that the segment by Gareth Evans and Timo Tjahjanto in V/H/S/2 was more engaging than the “Amateur Night” segment in the original, so where does that leave us? The double-edged sword with anthology films is that they’re all very segmented and disjointed. When people leave most films they start talking about certain scenes/sequences that they enjoyed or didn’t enjoy, but with an anthology, those segments/sequences are typically and entire short film created by one filmmaking team. I’d say the ratio of what I liked/didn’t like in this movie is about the same as with the first film, so how do they compare? In that respect, comparing the content and filmmaking style to the first film is a pretty stupid idea, considering the wide array of filmmakers and genres that have been brought in. I will say that the pacing of this film is better and the way that the tone and flow of each segment plays off of one another is better than the first. Also, with the exception of the one sequence that’s over 30 minutes long, each segment is a lot shorter, so the entire experience is condensed into a little over 90 minutes as opposed to the first one being almost two whole hours. In that respect, yes, this movie is an improvement from the original, but judging one story vs. another is just kind of pointless. If you liked the first, you’ll like this one, some parts more, some parts less, but if you end up disappointed with V/H/S/2, just give it 6 months or whatever and you’ll probably get to see another one being released.

There is a God
Last time I saw Hausu was halfway through a 24-hour horror movie marathon at midnight, dozing in and out of sleep. Guess it really is as wackadoo as I half-remembered it!
“Yes congrats on your #DayOfTheDead tv show or whatever but check out my #ReturnOfTheLivingDead tattoo!”
Carlson Young from #Scream: The TV Series has wanted to be killed on-screen since the end of Season 2. Does she want to appear alive in a #ScreamMovie to do battle with #Ghostface?