I don’t like vampire movies. Yup, I said it. I just…I don’t know, there’s only so many ways you can tell a vampire story, ya know? Especially now, when “vampires” are synonymous with “whiny babies that sparkle”, I think now more than ever I am not interested in another bloodsucker movie. I’d say that out of all the vampire movies I’ve seen, the one that I most regularly watch and enjoy would be 30 Days of Night. I enjoyed the more horrific aspect of being a creature of the night as opposed to the guy with a goatee and floppy hair. Despite my hesitations, there was just something about the trailer for Kiss of the Damned that I really dug. Because I hadn’t heard an overwhleming response for the film at SXSW this year, I had to pass it up to see Cheap Thrills (which was awesome). Although I don’t regret the decisions I’ve made, after now having seen Kiss of the Damned on my little computer, I wish that I’d had the opportunity to see it on the big screen to really take in all the sleazy sexiness of the throwback love story.

Oh damn, she could bite me ANY time, know what I mean?

While trying to write a new script in a small Connecticut town, Paolo (Milo Ventimiglia) falls pretty hard for Djuna (Joséphine de La Baume), after only one night. She plays hard to get, but eventually comes clean that she’s a vampire. Paolo then decides, as I’m sure many of us would decide, that he’s passionate enough about Djuna to ask her to turn him into a vampire so the two could be together forever. Paolo and Djuna have a system worked out where they feed on animals instead of humans, live in a house devoid of sunlight, and everything is going fine. Fine, that is, until Djuna’s sister Mimi (Roxane Mesquida) arrives, who is more apt to channel her more primal instincts. Sex, death, all the cool stuff. As Paolo and Djuna’s relationship progresses and they spend time with other vampires, having Mimi around angers Djuna at why she can’t be as sophisticated and secretive as everyone else, but there are aspects of Mimi’s primal nature that seem to excite Paolo. As Paolo make plans to leave the country with Djuna, all three characters are forced to either reject or accept their desires and decide what’s really important to them. 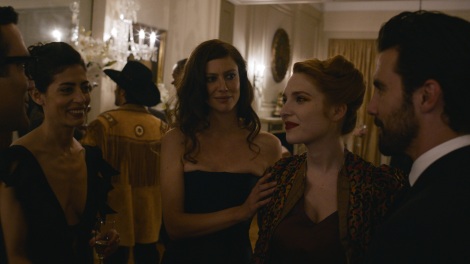 Come to think of it, I’d let all of them bite me! Even the bearded guy from Heroes!

Everybody wants to try something different with a monster that’s never been done before, but Kiss of the Damned decided to bring us the reasons everyone fell in love with these monsters in the first place. When the characters become more vampiric, there isn’t some demonic, ugly change, they merely grow fangs. Paolo doesn’t become a vampire accidentally, there’s not an awkward “What’s happening to me?!” montage, Djuna let’s him know EXACTLY what he’s getting in for, and trust me, one look at Joséphine de La Baume in this movie and you’d ask her to make you a vampire twice. These monsters weren’t trying to take over the world, they were actually trying to lay low in society and curb their appetites for blood so they can more easily fit in with modern society. There wasn’t some sort of endgame of taking over anything, these were creatures of passion who were trying to redirect their passions long enough as to not raise suspicion from anyone. The music in the film really fits the vibe of the timelessness of it, as there aren’t too many references to modern technology, and the whole thing felt very much like a more stylized vampire movie that Hammer would’ve released in the 70’s. It’s still a vampire movie, so I can still only connect with it so much, but the emphasis is on the love story between Paolo and Djuna. It mostly feels like a love story where vampires happen to pop up occasionally, as opposed to relying on the vampiric qualities to drive the film. It’s still a vampire movie, so I couldn’t fully connect with it, but if you want sexy vampires doing things that sexy vampires do, and a great atmosphere, then Kiss of the Damned is for you. 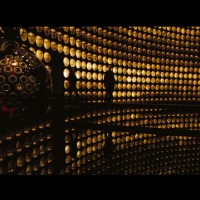 Oota Goota, Poppy?
When you have French fries
TFW you realize you forgot to make a “Settlers of Bo-Katan” joke to @therealkateesackhoff about #TheMandalorian
Happy #TwinPeaks day! Also, I encourage you all to find a #wcw who will marry you at the Great Northern.