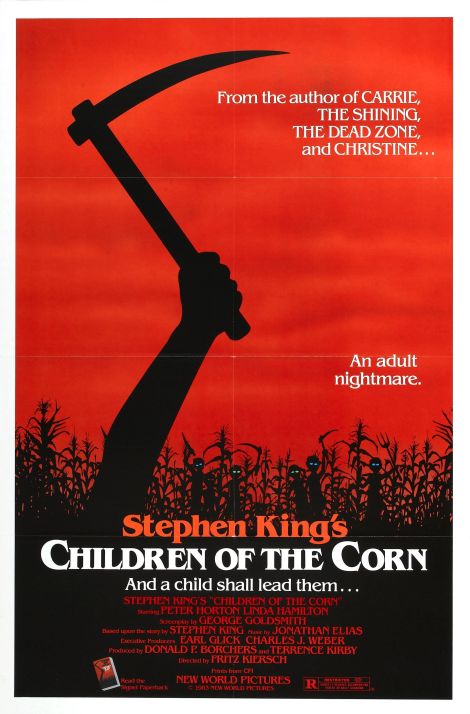 The year was 2007. The place was a used record store in Massachusetts. While perusing their used DVD section, something I did when DVDs were the height of technology, I stumbled across an interesting DVD spine. It read “Children of the Corn/Creepshow 2“. Both of these movies are movies I had known to exist, but I hadn’t seen either of them. Being a big fan of Creepshow, I figured I could just skip straight to owning its sequel for a couple of dollars. When I took the DVD off the shelf, the cover was the poster for Children of the Corn, and precariously placed in the corner was a little bubble that said “2-disc set includes: Creepshow 2“. What the fuck did these two movies have to do with one another? It seemed strange at the time, so I bought it, but I realized later that both movies were connected to Stephen King, so I guess it’s not THAT crazy? Anyways, I brought the movie over to a friend’s house and we watched it, and since I did that in the summer, I always think of it as a summer movie. Good thing I watched it in July, am I right guys?! 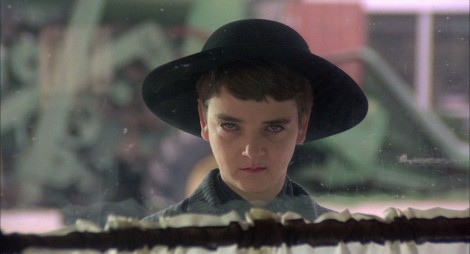 Believe it or not, this is neither Paul Williams of King Joffrey

A child gives memories of what happened to all of the adults he knew a few years prior, which was that they were brutally murdered in a revolt staged by the child pastor Isaac (John Franklin). Burt (Peter Horton) and Vicky (Linda Hamilton) are driving across the country to get to a new job in Seattle. Driving through Nebraska, they accidentally hit a child while passing through endless rows of cornfields. When they inspect his body, they find that before they hit him, his throat had been cut. Burt and Vicky don’t know that it’s because this child was trying to escape Isacc’s cult, but we know that as the audience because we are magical and can jump back and forth between lots of shit going on. They go to look for help in the nearest town and have trouble finding adults, because this is the town that Isaac is now in charge of. Because of a failure of crops one year, Isaac thought it would be a good idea to sacrifice any and all adults to “He Who Walks Behind The Rows”, some sort of demon in control of corn. Not Korn the band, but corn the vegetable. Corn is a vegetable, right? With Burt and Vicky being adults, Isaac and his minions attempt to sacrifice them as well, only to have the kids turn on Isaac and sacrifice him instead. Burt then lights the whole cornfield on fire as He Who Walks Behind The Rows appears as a giant fireball, so don’t ask me why fire kills the fireball. I think it’s something in the Bible. Anyways, Burt and Vicky survive, along with two small children who didn’t want to be in the cult, and then Burt jokes around about the terms and conditions of how long he will pretend he’s the parents of these kids for.

I know I’d go to church way more if there was blood on the walls and it was filled with corn stalks.

I know that creepy little kids really freak some people out, but they do nothing for me. Seeing all these little dickheads acting like assholes doesn’t make me hate kids any more than I already do, but I never really liked kids that much to begin with. I did like that the movie could have easily shown Isaac to be some sort of false prophet and have a reveal that all the things he was saying and doing was for naught, but he actually ended up being true to his word. A giant fucking fireball actually did start hovering over the fields! There was also some little Tremors-esque monster thing crawling around under ground, so I’m glad Isaac wasn’t just lying. Although, I guess it’s then kind of confusing to find out that Isaac was right and he really was helping the crops thrive just by sacrificing some adults, so you don’t really know who the villain of the movie is. Was it Isaac, who just kind of told dumb kids to kill their parents, or is it the giant, fiery demon that had the adults sacrificed to it? Even though I never really found the movie to be scary, I do think it had some really interesting things to say that not everyone picks up on. 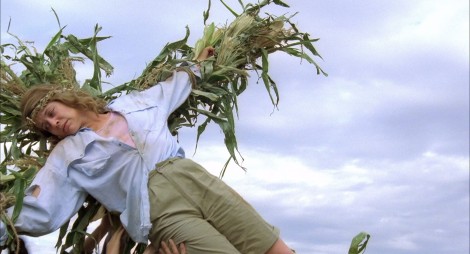 If only those kids knew how many pull-ups Linda Hamilton could do, they would’ve second guessed taking her captive.

The thing I enjoyed most and always remembered liking about the movie was its commentary on religion and mob mentality. Okay, so maybe I don’t remember any specific verses in the Bible that talks about demons that control corn crops, but that’s not the point. Burt specifically calls out Isaac by telling him that he’s not allowed to pick and choose what things apply to him to get his message across, which I think is something that resonates just as strongly in 2013 as it did in 1984, if not even more. Burt is taking a job in the medical field, so he represents the scientific aspect of our society, whereas Isaac more obviously represents the religious aspect. Isaac isn’t necessarily wrong in what he wants to accomplish, having the crops that the community relies on, but the way he uses religion and fear of an unseen, all-powerful entity is the disturbing thing about it all. In 2013, gay marriage and equal rights is a much hotter topic of discussion in regards to religion, and often the argument is made that people only pick certain aspects of the Bible to argue their point. Also, when Burt is in a position to murder someone who has been trying to sacrifice him, he avoids the opportunity, knowing that violence towards someone who had succumbed to the mob mentality woulds solve nothing, representing the fact that violence will solve nothing. Okay, maybe Burt got violent with his fireballs in a corn field, but that’s besides the point. Although the movie is kind of cheesy and not all that scary, I do think there are some interesting messages that it was trying to get across that might have been a little stronger in the original short story than happen in the movie.

Talked to Kiernan Shipka about returning to play Sabrina for Riverdale, or at least I tried to!
These looked better than they tasted!
💀🎃💀
Oh, right, yeah, I interviewed MARK HAMILL about horror movies and joining an animated segment of Creepshow? Totally normal thing to happen this week! Link in bio.