I know it will make me sound like a whiny baby, but I always get defensive when a movie could potentially exploit something I love. In the case of Deathgasm, it’s heavy metal rock n’ roll. I know I know, I’m not the only one allowed to enjoy the thing I enjoy and I have absolutely no right to get defensive, but it’s my gut reaction! YOU CAN’T GET MAD AT MY GUTS. I just won’t let you. All I’m saying is that, hearing of a movie that involves metal and corpse paint and a magical song that unlocks demons, I got paranoid that a bunch of filmmakers decided to cash in on the Satanic imagery prevalent in metal to make a quick buck. Luckily, I was wrong, and Deathgasm is a loving tribute to heavy music, gore-sploitation, and the almighty Satan.

How can you be heavy metal brethren without a cool guy handshake?!

When Brodie (Milo Cawthorne) moves in with his religious aunt and uncle and their bullying son, he retreats deep into aggressive metal, the only thing that brings him comfort. His affinity for all things Satanic leads him to befriend Zakk (James Blake), another metal-loving outcast. The two recruit more band members, and while pursuing a rumor of a legendary metal singer, Brodie and Zakk find mysterious sheet music. Desperate for new material, their band, conveniently named “Deathgasm,” play their recently acquired music and, to their surprise, unleash demons upon their small town. The band slices, dices, and dildo-bludgeons their way through their town in hopes of sending “The Blind One” back where he came so he doesn’t ruin any tour plans.

Wondering if the casting director planned on hiring a Danzig lookalike or if it was just a happy accident.

Dammit, New Zealand, why can you pull off horror-comedies in ways other countries can’t?! The silly tone of the film is established early on, both within the film and in the way the filmmakers edited it. When the film introduces new characters, we see an illustration of that actor next to what Brodie feels defines that character, from 10-sided die to penises. Once the film prepares the viewer for the ensuing silliness, writer/director Jason Lei Howden lets the material speak for itself. 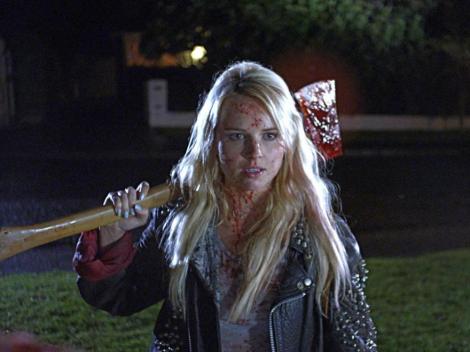 See, it’s funny, because the unlikely character proved to be quite resourceful!

Although Deathgasm hits many familiar beats and uses anticipated tropes, especially for those familiar the work of Peter Jackson, it still finds ways to subvert expectations and surprise you with jokes and gags throughout. For example, one scene involves Brodie and Zakk coming across a character who, in any other film, would be incorporated into the anti-apocalypse gang to save the world and create a forced, unlikely bond between the characters. Instead, things go…well, a slightly different way for the unlikable character. I won’t spoil it for you because it was one of my favorite moments, but more than a handful of times, I thought I could predict the upcoming joke, only to be pleasantly surprised. Maybe all that means is that I’m dumb and am easily impressed? I guess that’s possible. 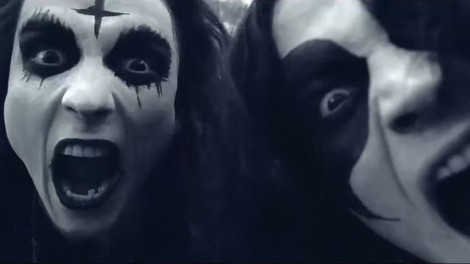 Every true metal band needs a music video of them thrashing in the middle of the woods!

It took about ten minutes of Deathgasm for my fears of having to stand and shout, “DEATH TO FALSE METAL MOVIES!” to subside. All it took was a subtle reference to King Diamond for those fears to be assuaged and I felt like I was in good hands with Howden. Although anyone could just toss Emperor or Nunslaughter on a soundtrack or toss in a Burzum reference after doing some Googling, this specific reference happened in a metalhead’s church: the record store. This sequence also featured two metalheads standing side-by-side, browsing the metal records, each one trying to pull out the more obscure album. This form of elitism and pride in knowing the most obscure, profane and obscene album is intrinsic to most metalheads.

Most movies that feature metalheads resort to the type found in This is Spinal Tap or Airheads, either long-haired cock rockers or scummy degenerates. That’s…entirely accurate. However, there are plenty of other types of metalhead out there and one thing they have in common is that they’re generally nerds. Not, like, losers, but people who don’t fit in with the rest of society. I’m happy to see that more films are being made like Hesher, which takes the stereotypical nihilistic outlook of metalheads and applies those beliefs to people going through grief. Or a movie like the Icelandic Metalhead, which juxtaposes the beauty of Iceland with the raw, assaulting sounds of metal to show the difficulties of someone trying to discover who they really are while taking comfort in never really fitting in. Deathgasm doesn’t delve too far into these more serious issues, but we do get to see a great moment when Medina (Kimberley Crossman) listens to a CD Brodie gave her, despite her skepticism about the genre, and when the riffs explode out of her headphones, she pictures herself as an iron-clad warrior standing in the face of impending doom. It’s a great moment that reminds the audience that, whether it be metal or hip hop or some other interest, you never know what you will connect with and what will empower you to wage battle with the armies of Satan, either figuratively or literally. Deathgasm handles something relatively silly, like putting on corpse paint and naming your band something like “Putrid Corpse,” respectfully while also being able to poke fun at the goofiness of becoming fanatic about any of your interests. This is a movie you should check out if you’re a fan of blood, guts, metal and mayhem. 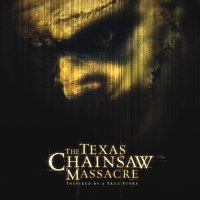 Carlson Young from #Scream: The TV Series has wanted to be killed on-screen since the end of Season 2. Does she want to appear alive in a #ScreamMovie to do battle with #Ghostface?
Seeing #HalloweenKills tonight so here’s my current #Halloween ranking. Should also note I’m using the Producer’s Cut of 6 instead of theatrical!
Crossing my fingers that #RLStine will put me on the cover of his next #Goosebumps book! Clearly Seth Grahame-Smith also supports the idea.
Guess I can see how this place got its name