People decide what movie they’re going to watch on Netflix for a variety of reasons. Maybe the description sounds interesting, maybe it has a high rating, maybe someone recommended it to them, and maybe its running time is the length that someone wants to stay awake. In the case of The Den, it was a combination of the last two. This film has been in my queue for a while and, when I saw that it was 75 minutes, decided it would perfectly fill the time before I wanted to go to bed. Also, I vaguely remember that when it came out, some people said it was pretty good! Man, those people were wrong as hell! This was a giant turd! But why was it a turd? Keep reading!

The only believable thing in the movie is that yes, sometimes we look like this when we open our laptops.

The film starts with Elizabeth (Melanie Papalia) opening up some fake ChatRoulette type of program, which ends up being just a pranky video. From there, we learn that Elizabeth is doing some vague type of research about humans, or something, and has to deliver a pitch to a board room to get a grant…I guess? Regardless, she basically looks into the camera and says, “I’m going to film everything all the time, otherwise this movie wouldn’t exist.” She goes from strange webcam user to strange webcam user when suddenly, one begins to harass her! Then a sextape of her and her boyfriend gets mailed out because, hackers, and the boyfriend goes missing. Elizabeth is stalked, gets weird videos, is kidnapped by assailants, and it turns out she’s just another installment in a series of videos where people get stalked and killed, only for the footage to get sold to weirdos online.NOT AT ALL CONVOLUTED.

It looks like someone got lost on the way to their audition for Strangers.

Whoops, I meant it was incredibly convoluted. Does this movie sound dumb enough yet? Oh, well I should mention, the conceit is that the audience is looking at computer and video screens as all of this stuff unfolds, because the plot alone wasn’t obnoxious enough. The film feels like it was pitched by someone walking into a room and saying, “Hey, you know what teens like? The internet! Well, what if there were bad people on the internet? And we make the movie screen look like a computer?” and they were handed a check and made this atrocity. Both in story and in execution, this film was just…bad. It is as pointless and erratic as actually surfing ChatRoulette for 75 minutes, and the film constantly cheated its premise. You know what movie is terrible? Unfriended. But at least with that piece of shit, the filmmakers stuck with the premise of only ever showing what could be seen on a computer screen. The Den just switched from screen to screen, however they liked, and made it look like a reality where no one ever actually called or texted one another, but just Skyped and FaceTime constantly. Does anyone actually do that? Do teens do that? I’ll be teens do that. I’d say Papalia did the best with the material she was given the problem was the material was complete dogshit. For the good of your own sanity, do not watch The Den at any cost, for any reason, ever in your life. 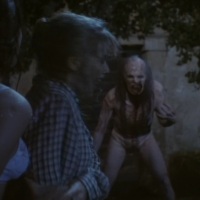 You will NOT believe the kind of crap that Bart Harley Jarvis is trying to pull this year
This was a cool day! I look like an ogre stealing a princess!
Need to start telling myself this every day!
Thanks to Werewolves Within (in theaters Friday) director @joshruben for humoring me and talking about his favorite John Carpenter movies. His answers surprised me enough that I forgot how to count!