Three things that I knew about this movie before watching it: 1) Michael Rooker, 2) psycho killer, 3) strippers. HOW CAN YOU POSSIBLY FUCK UP ANY COMBINATION OF THOSE WORDS?! Ask the makers of the film Penance, because they certainly managed to pull it off. I would say three better ways to describe this film would be: 1) half-assed, 2) boring and confusing, 3) strippers. Don’t get me wrong, there are certainly strippers involved, but still, there are so many more viable ways to combine Michael Rooker with strippers and have an Oscar worthy film. It felt like the people who made this movie had seen a bunch of entertaining and original films, took elements from those, completely fucked them up, and tried to pass it off as their own. Well you can’t fool me, Douchebag McGee! 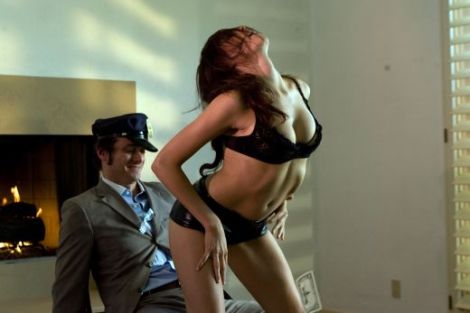 Might as well get the only redeeming thing about this movie out of the way now.

The film starts with some sort of home video plea for a woman to enter a TV show about changing lives or something like that. She then goes on to talk about her daughter, and rambling about how she has so little money that she is going to start stripping to give her young daughter a better life. The next 10 minutes chronicle her stripper training as well as her first actual strip dancing event. Her stripping teacher then has the shit kicked out of her, so our wholesome mother fills in for Sassy (yes, a stripper named Sassy) on a gig where she will get a buttload of money. The event is taking place at a mental institution, yet she doesn’t quite understand that maybe she should turn around. Tony Todd is even the one driving, and she suspects nothing is odd about the situation! So she goes to the mental institution, where there are other strippers, and the strippers all end up taking turns doing naked dances for some guy who is hiding in the dark in a chair. Then, Michael Rooker comes in and acts like a creep, and we realize things aren’t looking good for the strippers! 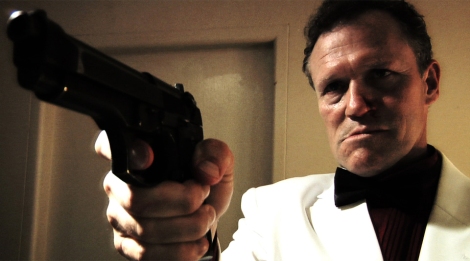 I feel like Michael Rooker showed up on the set and said “Oh, I’m only in five minutes of this movie? Well, now you’re all dead”.

Turns out, this isn’t your run of the mill stripper dance contest. Apparently the silhouette guy is a former OBGYN and he is capturing strippers in an attempt to absolve them of their sins before they enter heaven. He does this by, well, cutting their vaginas off and sewing them up. Clearly I am not at all familiar with female anatomy, which Rampaige will back me up on, but that is essentially what he’s doing down there. Once they are mutilated, he then offers them $150,000 and they can leave, or they can claim they are now pure. Sure enough, most of them attempt to take the money, then Michael Rooker kills them. It seems as though this OBGYN has some sort of terminal illness, and in an attempt to purify himself, he sits down in front of the camera, where we can see him from the waist up, and he castrates himself. Might not sound exciting, but you see him cutting the circulation off, you see blood spraying, then he PULLS HIS OWN TWO BALLS INTO FRAME WITH ALL THE TUBES AND VEINS STILL ATTACHED BEFORE HE CUTS THEM WITH A FUCKING PAIR OF SCISSORS. Sorry, I didn’t mean to type that in all caps, but there are some things that get typed in caps lock all on their own. Then he offers our main stripper the chance to get out alive, but manages to stab him or something, shoot Michael Rooker, and we assume, live happily ever after. Then the title cards at the end say that his body was never found. Who gives a shit?

One look at this guy and you can tell he’s the type to cut his own balls off.

I know right? Total dogshit. Michael Rooker had maybe about five minutes of total screen time. YOU HAVE MICHAEL ROOKER IN A MOVIE ABOUT STRIPPER KILLING AND HE’S IN IT FOR FIVE FUCKING MINUTES?! Sorry, once again, my hands lose control of themselves at times. I mentioned how this was a half-assed regurgitation of other films that I’ve seen, and the first exhibit of that is the way it was filmed. Remember how I said the film started with an audition tape? Well, the entire movie was shot under the presumption of a character filming it, or someone putting the camera down, or some bullshit like that. It’s hard enough to have a film and pass it off as “These tapes were recovered from blah blah blah” and have it actually work. Films like The Blair Witch Project, Paranormal Activity, [REC], and Quarantine all pull it off well. This film pulled it off about as well as Survival of the Dead…and you all know how much that sucked. The fact that the opening title cards also said “The following tapes were recovered from…” reminded me of The Poughkeepsie Tapes, which also managed to market the film in that way, but once again, was far more successful.

You can tell this girl is a stripper from the strange bruises. Sorry, was that offensive to strippers? Guess I don’t have to worry about offending them with that comment, since none of them know how to read. HAHAHA TWO STRIPPER JOKES IN A ROW!

The other regurgitation of things I had seen before was the actual content of the film, which reminded me far too much of the French film Martyrs, which is pretty gruesome. The concept of Martyrs is that people are being kidnapped and wrongfully tortured and abused in hopes of them getting pushed so far to the edge of their limits that they see God. The people doing this then hope to interact with someone who has seen God, in an attempt to unravel the greatest mysteries in the universe. Having a movie about a guy who kidnaps, abuses, and mutilates people to give them a chance of getting into heaven was just a little too similar for my tastes, and therefore made me feel like they just tried to copy off of a lesser-known film. Granted, that’s just my own take on it, and maybe the creative forces behind Penance had never seen Martyrs, but still. Before I leave you, I would also like to tell you that they spelled words incorrectly in the title cards. They read “Authorities were tipped off by an anonomous source”…ANONOMOUS?! Who fucking let these people make a movie, and somehow completely missed an incorrect spelling in GIANT LETTERS, and nobody noticed until THE MOVIE WAS RELEASED ON DVD?! Jesus Christ, these people should have their vaginas sewn up.