FINALLY! BARRY LEVINSON MADE A FOUND FOOTAGE MONSTER MOVIE! It’s the moment we’ve all been waiting for. Hahaha, okay guys, I was just joking around. You know me, I love jokes! I’d like to clarify that Barry Levinson is NOT Barry Sonnenfeld, the guy who directed those Men in Black movies. Barry Levinson has directed things like Rain Man, Diner, and Wag the Dog. This dude fucking loves Dustin Hoffman! Something you might notice about those titles is that none of them would be anything close to falling into the “horror” genre. In fact, the only movie he’s done that might qualify as horror would be Sphere, which ALSO stars Dustin Hoffman! Those two dudes must be some serious bros to work together so much. And like Sphere, The Bay deals with shit that lives in the water, except instead of trying to kill Sharon Stone, they’re trying to kill a bunch of unknown actors. You’re off the hook this time, Sharon. 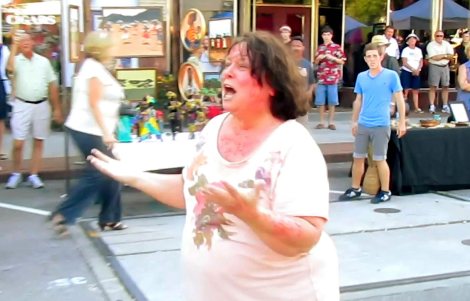 You really should be using stronger sunblock. It’s summer time.

Donna (Kether Donohue) is having a video chat with someone and is talking about the truth behind events that happened in a small Maryland town over 4th of July weekend. She uses footage that was supposedly confiscated by the government, which has since been leaked, to piece some sort of documentary together. We see footage from her camera crew, marine biologists out in Chesapeake Bay, hospital employees in contact with the Center for Disease Control, and residents of the town. Donna was a reporter covering the festivities, which were your typical summertime fun activities, like crab eating contests, watersports, and general tomfoolery. Outbreaks start happening of people being covered in boils and blisters and filling up the local hospital, as well as bodies starting to pop up that appear to be victims of extreme acts of violence. The footage from the marine biologists shows them discovering infected fish in the water, filled with parasitic larvae. There appears to be an isopod in the bay that has mutated from a nuclear incident a few years prior and through the tremendous amount of animal waste, that’s filled with hormones and steroids, which is running into the bay from a nearby farm. People don’t learn what’s happening until it’s too late, and through all the water being consumed in the town and the water misters brought in to keep everyone cool, every resident of the town gets infected, leading to lots of scenes of isopods bursting out of people’s skin, and Donna being the only one wanting to get the truth out there.

I was wondering whether or not I would “spoil” this movie, but there’s really nothing to spoil. There’s no reveal at the end of anything surprising, because you learn in the beginning about the government taking all the footage, so there’s no additional information when you get to the end. There’s isopods, those isopods got all big and freaky, people died. The end. One thing that I liked about the movie is that it was somewhat grounded in reality, by combining what’s going on in the farming industry and pumping animals with virtual super soldier serums, and how that can affect more than just the food we eat. They also didn’t blow the isopods up to being 400 times their actual size, it was something more feasible for people to believe. Some of the practical effects showing corpses or people covered in lesions were pretty gross and cool, even if the CGI effects weren’t all that exciting. I also enjoy the found footage movies that are treated as documentaries following a weird/scary event, so that was a nice change. Other than that, the movie wasn’t all that good. Most of the acting was pretty bad, the story jumped between 4 or 5 groups of people the whole time, so you didn’t spend enough time with any one group to give a shit what happened to them. Considering this was trying to stay grounded in reality, the idea of the government being able to confiscate EVERY piece of footage that recorded the events seemed a little ridiculous, especially when that footage is leaked from one specific website a couple of years later, they just didn’t really sell it. I think if someone saw this who was already nervous about what lived in the ocean, then this movie might freak them out, but other than those people, this felt like a movie that, were had it not been shot in the found footage style, would have been even worse than it already was.