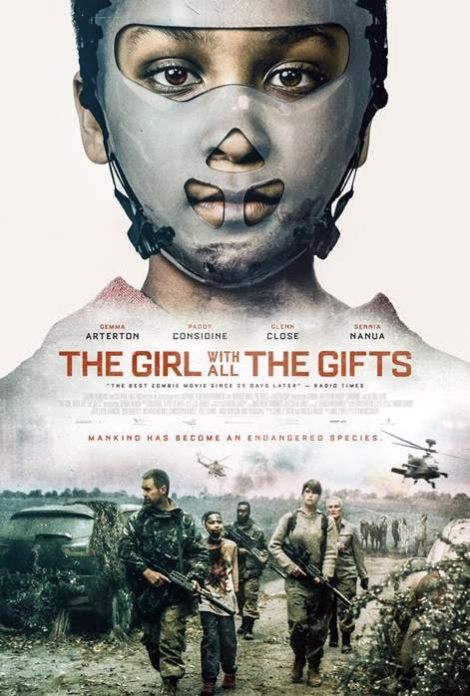 Man, there sure were some long-ass movie titles in 2016, weren’t there? I constantly confused The Girl on the Train, The Girl With All the Gifts, and I Am the Pretty Thing That Lives in the House confused for one another, despite only two of those being horror films and only one of the starring Glenn Close. Listen, if you came to this site expecting to hear the thoughts of someone who’s smart, it’s better you know now how easily I am confused and that will explain all upcoming thoughts. Regardless, this is the one with Glenn Close, Gemma Arterton, and the always awesome Paddy Considine. Wait, Glenn Close in a horror movie?! Surely, I must be mistaken! No, I am taken, not mis-taken, and Girl With All the Gifts is a solid entry into the zombie genre featuring some fresh ideas and top-notch acting talent. 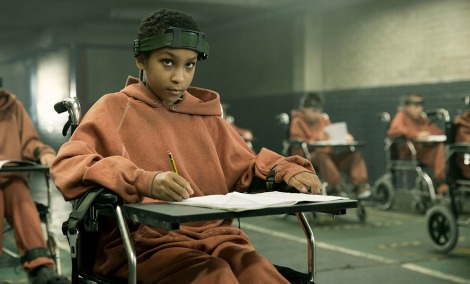 I mean, I know school can make you feel like a zombine, but this is just ridiculous!

The zombie infection has already spread, but the audience has no idea. Helen Justineau (Arterton) recites fairy tale stories to restrained children, and when she makes physical contact with Melanie (Sennia Nanua), Sgt. Parks (Considine) bursts into the room to reprimand her. He washes something off his arm and displays it to one child, triggering their violent side. These children are high-functioning zombies and Dr. Caldwell (Close) is set on figuring out what makes them tick. Shortly after, the zombies overrun the military base, but these four manage to escape. They hope to make contact with another larger base, but encounter zombies along the way, which both vilifies and humanizes the young Melanie. Caldwell wants to dissect her to find a cure, Justineau wants to study her, and Parks just wants to get everyone safely to their destination. The film explores what makes someone a human or a monster, calling your orders into judgment when they test your morals, and has a few clever twists on the zombie genre that leaves you with a surprising finale. 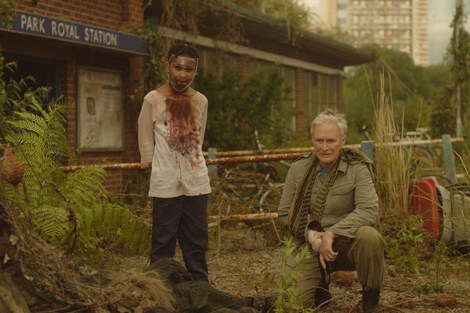 I wish we learned at the end of the movie that this was a secret sequel to Albert Nobbs.

Ya know, I often dismiss reviews that do nothing more than compare one film to others, but for the sake of brevity, I’m going to do just that: The Girl With All the Gifts is like if the tone of 28 Weeks Later was combined with the plots of Dawn and Day of the Dead. Considering these are all pretty well-regarded zombie movies, and I already mentioned the strength of the actors, this should all bode well. Like Weeks, Girl explores a group of disparate characters exploring a zombie-filled England with fast-paced ghouls, a muted color palette, and gruesome violence. Conceptually, the film starts off with the invasion already underway, and rather than dealing with the shock and horror, the story has already advanced to the point of trying to study the creatures, much like what happened with Bub in Day. As far as inspirations go, the filmmakers selected some good ones. 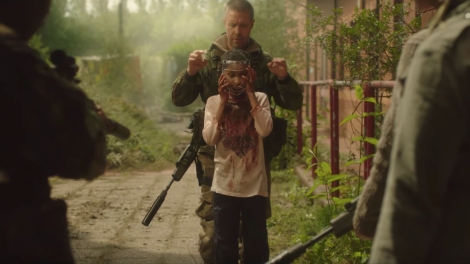 The drawback to her wearing a mask is, ya know, you can use your hands to take the mask off.

Now that we have those influences out of the way, don’t at all think that this film is just an imposter that borrows some good ideas. For one, these aren’t your traditional zombies that are fiending undead, but they are humans who have been affected by spores that cause them to act the way they do. Secondly, the society has developed a gel that blocks the scent of their flesh, rendering them virtually invisible to the violent hordes. Thirdly, the film establishes what’s at stake if they don’t figure out this cure. The film preemptively lets you in on why you shouldn’t apply your preconceived notions of zombies or whatever “rules” you have about zombies and why they’re pointless with this film. 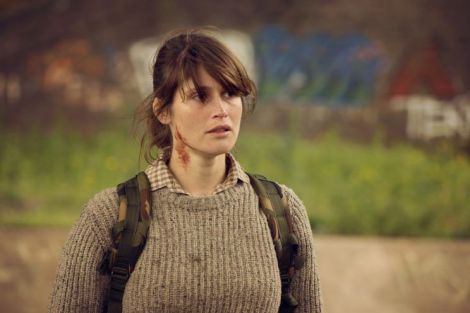 Sorry, Gretel, there are no witches for you to hunt in this movie.

All that being said, the film is still a zombie film, so I only can get so invested. The influences I mentioned earlier in this post are some of the few zombie movies I actually enjoy, and Girl isn’t still quite as good as those. Don’t get me wrong, the concept and execution are both solid, but as far as personal tastes go, it wasn’t totally up my alley. It was pretty cool seeing Close in a horror movie again, a zombie horror movie at that, and solidified why I think Considine is such a badass. Hell, I even liked Arterton, who I think I’ve only seen in The Voices, but she hold her own with the actors I was more familiar with. Oh shit! And Nanua was also pretty rad, even more so considering she was probably only 11 years old when they made this. If you like zombie movies, you’ll love this one, and if you just want to see a compelling dramatic thriller with great performances all around, then it’s also worth checking out. Great job, everybody!