One of the joys of covering film festivals is that you’re inundated with so many films that you don’t often have time to research all of them to find out what you want to see and why it should be seen. In the case of Rift, all I knew was that, at one point, a guy bleeds from his head while standing in an open field. THAT’S IT! Well, I guess I also knew it was made in Iceland, so I guess that means one promising frame and the knowledge it took place in Iceland was enough for me. What I got was a taut mystery that walked the line between sci-fi thriller and relationship drama. 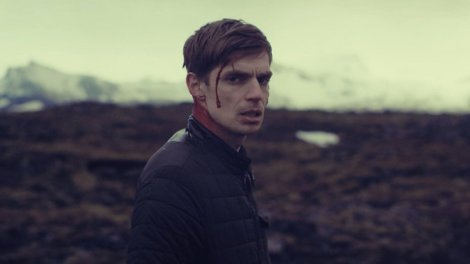 This is it! This is the picture! Pretty cool, right?

When Gunnar (Bjorn Stefansson) receives a call in the middle of the night from his ex-boyfriend, Einar (Sigurdur Thor Oskarsson), he heads to his former lover’s vacation home. Given their last encounter and the emotional distress Gunnar caused by moving on, he takes responsibility for whatever might be plaguing Einar. Upon Gunnar’s arrival, Einar claims he was merely drunk, leading the two to instead focus on their own issues. As they spend more time together, they begin discovering things about themselves, however, they also begin discovering clues that maybe Einar wasn’t imagining being stalked and perhaps there truly was someone out to get them.

Lucky for me, my initial assumptions about the movie looking gorgeous because it came from Iceland panned out, creating a hauntingly beautiful atmosphere for me to enjoy. The remote landscapes and craggy terrain mirrored the characters’ emotional detachment and willingness to compartmentalize, as Gunnar had already entered into a new relationship while Einar struggled with his own personal depression in the fallout of the relationship. Additionally, as gay men, they clearly had experienced hardships and oppression throughout their lives, with Einar spending much of the film recalling experiences from his childhood at the family home.

Wait, you mean there are TWO scenes where people stand in a field in Iceland? EVEN BETTER.

As a romantic melodrama, Gunnar and Einar had a lot of chemistry and got the viewer engaged in their journey. I’d argue that virtually everyone who’s been in a relationship could relate to both characters’ perspectives, whether you longed for the person you are no longer in a relationship with and feared that the experience meant more to you than it did to them or perhaps you’ve been able to move forward with your life, wondering why they are still clinging to you. In that regard, the stalking presence could have been the manifestation of the guilt over moving on from someone or the uncertainty over having to say goodbye to someone you loved, making for an effective metaphor for the end of a relationship.

The film isn’t entirely metaphorical, as there are some hints that there really is someone stalking the couple and poses a real threat to their lives. One of the possible explanations for the real-world threat was due to a man who lived in town who was known for seducing young boys who might have had a run-in with Einar that didn’t go how he wanted. Given that there are still “people” (a term I use loosely) who frown on homosexuals, this would give the old man a reason to cover his tracks and silence someone who may out him. Ultimately, the success of Rift comes from the exquisitely built narrative that allows for multiple interpretations of the events, nearly challenging the viewer to come to their own conclusions about the narrative, while some might be disappointed that they’re left with a feeling of ambiguity. You could say that those viewers dissatisfaction will haunt them much the way the couple themselves were haunted, although that might be a little too convenient.