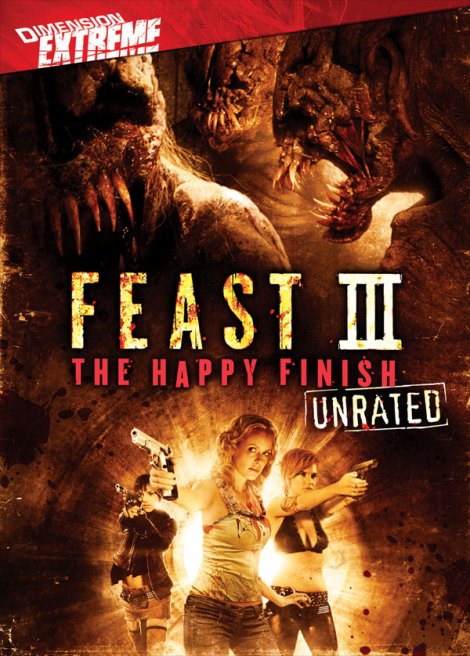 I definitely had mixed feelings about the previous installment in the Feast series (Feast 2 Review), but I figured I’d be an idiot for watching parts 1 and 2 and not finishing the trilogy. Depending on your memory, or whether or not you were smart enough to click that link a couple words behind this one, you might recall the insanity of Feast 2. My biggest issue with that one was the length, in that they tried to cram too much into one film, and there were a few too many slow parts. Feast 3, however, got me excited because I saw that it was only about an hour and fifteen minutes, and I had assumed it would be a trimmed down rehash of the second film. Well…I was wrong.

Yes, I did use this exact picture for the review of Feast 2, but technically, it was labeled as “Feast 3”, so brush the sand from your vaginas. Also, you can see both Tat Girl and Tit Girl, so that’s always a bonus.

This film starts at the point where the previous film left off, and there is even a quick recap of events. All you really need to know are that there are monsters, and there are people stuck in a town with these monsters, and they don’t want to be stuck there. Some people have died, some have lived, and some will be dying shortly. I mentioned in the review for the last film that one character was named TIT GIRL and one was named TAT GIRL, and how confusing it was because they both had tattoos AND tits, but luckily, the opening of this film clarified who was which. About five minutes it, we see Honey Pie, played by Jenny Wade, get decapitated, and then a monster eats her head. Her head must be made out of lots of fiber, because almost immediately we see a closeup of that monsters butthole as he tries to poop out her head. Yes, we saw a monster butthole trying to poop out a lady’s head. Off to a good start!

Sadly, the film is downhill from there. They already killed off one reason to watch the movie, and then a few scenes later, we see Cockroach (from The Cosby Show), get fucked in the ass by a monster dick through a four foot long pipe. A few scenes later, Tit Girl bites it. Not bites the dick, but bites it in the sense of “dies”. The gang then makes their way underground, where a new “hero” arrives, only to have his arms chopped off and fail to save Tat Girl. Yes, the movie is only 30 minutes in, and both Tit Girl and Tat Girl are dead. Why did I keep watching? Who knows. A retarded person makes an appearance as some sort of prophet, and we see some human/monster hybrids attacking everyone and going apeshit, and then there is an awful scene involving a strobe light. Our main characters end up fighting their way out, as well as start eating a monster to kill him. I think that’s pretty much the end, and if it isn’t, I really don’t feel like talking about it anymore. 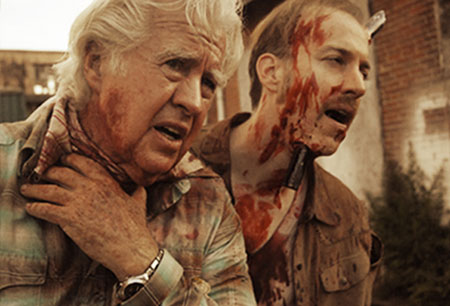 Well look who it is, Bloody Neck McGee and good old Pipey Head.

Between Feast 2 and Feast 3, we have about three hours worth of material, where we really only needed two. Feast 2 had more redeeming moments than Feast 3, but ultimately, the two should have just been combined. It’s like they got feedback after the first sequel about it being too long, and arbitrarily cut out half an hour, with no rhyme or reason. It sucks, because I actually really enjoyed the style of the film and the aesthetics of it, but it just didn’t seem fully fleshed out. The hyper-saturated colors, the high contrast in every shot, all that stuff makes for a cool looking film, but there isn’t enough content to back it up. This film didn’t even match the insanity of either of the first two films, but hey, at least it was shorter, and we got to spend a little more time with both Tit and Tat Girl. At the end of it all, the Feast series is a series I really wish I could enjoy, but still falls a little flat.

I couldn’t find the trailer, so enjoy the sounds of Mark Gormley 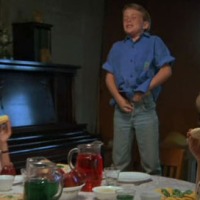 Good advice!
Here’s a #tbt to John Carpenter telling me why he won’t be writing or directing anything anytime soon back in 2019. Trying something new, apologies that the audio quality ain’t great!
Highly recommend getting married to someone who you never get sick of looking at AND to someone all of your friends would rather talk to, because they are cooler! #wcw