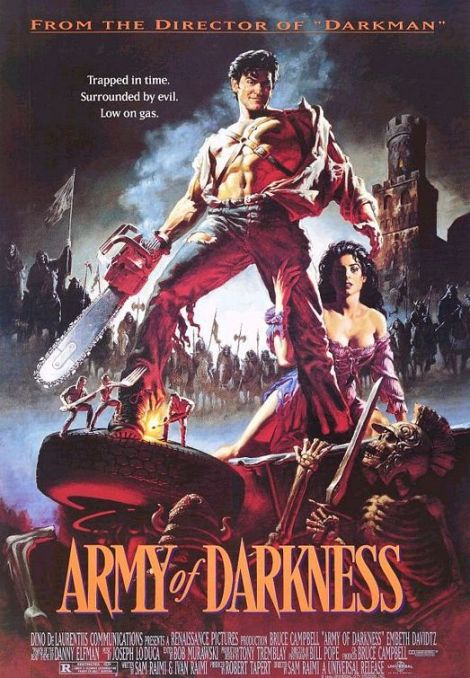 This is definitely my least viewed film of the Evil Dead series, and I’m not really sure why. I remember the first time I watched Evil Dead, knowing a little bit about it, I was confused as to why he kept both arms intact and had no chainsaw on his arm. I had to go and watch Evil Dead 2, and even then, he only got the chainsaw on the arm towards the end of the film. But then I saw Army of Darkness, and everything made a lot more sense. Every time that I think about watching this movie, I always assume it moves a lot more slowly than it actually does, so I’m generally not in a rush to throw it in. I blame my senior year high school English teacher, who for Halloween, let us watch Army of Darkness. The problem is that one English class was only 45 minutes, so we only got up to the part where Ash throws dirt on Evil Ash’s face, so I always think that part is only 20-30 minutes in, and there is a shit ton of boring stuff after that. Lucky for me, I am always wrong…DEAD WRONG!

Rather than a (barely) witty caption, I just want to quote the movie. So, uh, “USE THE FORCE LUKE!”

Ash, played by Bruce Campbell, visited a cabin and accidentally set loose an evil force that killed all of the friends he went with. Evil infected his hand, but he chopped it off, and he gets sucked into a time warp to the renaissance and everyone is confused. He explains that he has travelled from the future and everybody is cool with it because they think he is a prophet. He goes to get a mystical book, the Necronomicon, that will send him back, but after mistakenly uttering the wrong magic words, he awakens more evil. In addition to more evil, he turns into two people, a Good Ash and an Evil Ash, the evil one leading the army of the dead. The evil army storms the castle, there’s lots of wackiness, but eventually Ash utters the words that take him back to his time. Then it turns out he said them wrong again! Damn! And he kills a Deadite in S-Mart. Victory for Bruce Campbell! 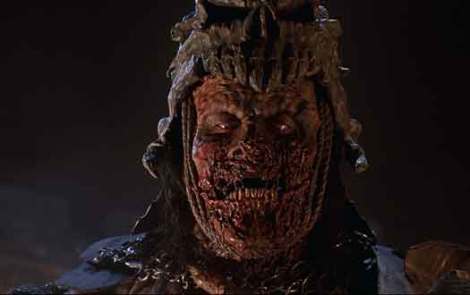 I mean, if he was evil, they should have made his chin smaller, to denote that that’s where Bruce Campbell’s power came from. But what would I know, it’s not like I was responsible for Spider-Man 3.

I suppose I could have been a little more elaborate with the plot, but if you haven’t seen this movie, do it now. I think it’s a tie between this film and Evil Dead 2 for which film in the trilogy I enjoy most. The first one seemed like it wanted to be a horror movie, but based on the lower budget, ended up slightly sillier than intended. Don’t get me wrong, of course it was intended to be silly, but maybe not as silly as it actually was. The second film seemed to hit it’s stride a little better, being able to take advantage of the humor while also trying to still be kind of scary. Army of Darkness seemed to completely abandon the scary aspect and focus solely on the absurdity of it all. The Raimis must have come up with lots of cliché and cheesy one-liners for Bruce Campbell to say, then wrote a plot around it, which is awesome. Bruce Campbell in this film is P-E-R-F-E-C-T. Between his dialogue and just the physicality of his humor, he is really at the top of his game in this one. I’m still on the fence about whether this is better than Evil Dead 2, but they are both just fucking awesome.