I think I had seen this movie once and a half. My first glimpses of it were when my older brother rented it and let me watch it, and it was fucking weird. There was a lot of dancing naked, weird turtlenecks, and people wearing weird animal masks. I must have either spaced out through most of it, or maybe left the room, because I only remember those things, and of course, the ending. Which reminds me, I will be talking about the ending of this movie in my plot synopsis, and it’s a good twist, so feel free to not read that part. So that was my half-viewing, and then when I got Netflix originally I got it and watched it in it’s entirety, and it was still really weird. Despite not having seen it all that often, it left a pretty big impact, and considering I referenced it when I reviewed The Last Exorcism (review here) I figured I should give it another go. Oh, and I wanted Rampaige to watch it, so I wanted to try to force her to see it.

On a secluded island off the coast of Scotland, Sergeant Howie, played by Edward Woodward, arrives to investigate the mysterious disappearance of a small girl named Rowan. The residents of this island all seem a bit odd, and something doesn’t really sit right with Sergeant Howie. While attempting to find out where Rowan has disappeared to, he sees lots of nakedness and people doing things that go against his strict Christian ethics. Everyone on the island appears to belong to a Celtic neo-paganist cult where concepts of sexuality and reincarnation are very prominent. Sergeant Howie is not a fan of this, and starts thinking that Rowan was possibly murdered. With permission of the island’s magistrate, Lord Summerisle, played by Christopher Lee, Howie digs up a casket supposedly belonging to Rowan, only to find a hare inside. Through his investigating, Howie determines that there is a connection between Rowan, the failure of crops the year prior, Rowan’s involvement in that year’s harvest festivities, and the pagan believes of this “cult” places Rowan in danger. While following a trail of clues, Howie discovers Rowan tied up, and thinking she will be sacrificed, helps her escape, only to stumble into Lord Summerisle. When Rowan hugs Lord Summerisle, he realizes that the little girl is not the one in danger, but in fact, Sergeant Howie will be the sacrifice. Howie is brought to a giant man made out of wicker, hence the title, that he is placed in and burned alive.

Not Work Safe! Wait, I’m posting this while at work. What does that say about me? IT’S JUST SOME BUTTS, PEOPLE!

For the record, I kept spelling Rowan incorrectly during that synopsis, and got pissed off every time. Anyways, poor Sergeant Howie, huh? I am glad I watched this movie because I couldn’t remember why I enjoyed it, only to have all my suspicions of enjoyment reaffirmed. This movie starts off as a typical thriller from the 70’s that is more about tone and mood than about scary characters or situations. Yes, it’s weird to see the people being naked all the time, and also weird to have so many scenes where the characters break into song, but these things shouldn’t be dismissed as arbitrary. I felt that the goal was to make a film that was different from most thrillers so that you could relate to Sergeant Howie in how bizarre everything was. For example, when Howie first gets to the island and is introduced to the daughter of the innkeeper where he’ll be staying, all the characters start singing a song about her being a whore and wanting to fuck her. Even the daughter looks on with a smile while Howie just stands there with a look on his face of “UMMM…WHAT THE FUCK IS GOING ON?”. You can relate to how weird things are on the island, and therefore, how weird the events of the movie are. 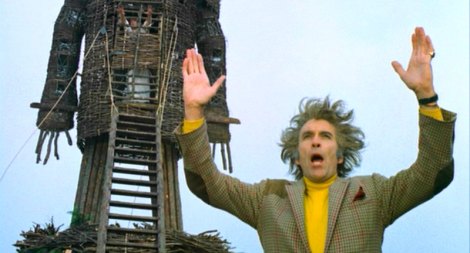 “AND I SWEAR, HIS COCK MUST HAVE BEEN THIS BIG!”

After establishing that the island is weird, where do we go from here? Sure, it’s easy to just say, “Everyone here is a weirdo”, but you then need some sort of plot to tell a story. About 45 minutes in, after realizing that everyone on the island are freaky creeps, they move forward with a pretty good detective story. You can see Howie putting everything together, and the viewer themselves question what has happened to this poor little girl. Who sent the letter? Why was her grave empty? Why did the crops fail? It’s then at the end of the movie, after convincing you it was a “normal” detective story, that they turn all of that on its head and you end up with a human sacrifice. This movie was even better than I remember. A great film that can combine a strange plot with surreal images and concepts and throw in a little bit of the occult and human sacrifice. Oh, and Christopher Lee wears this crazy ass wig at one point.