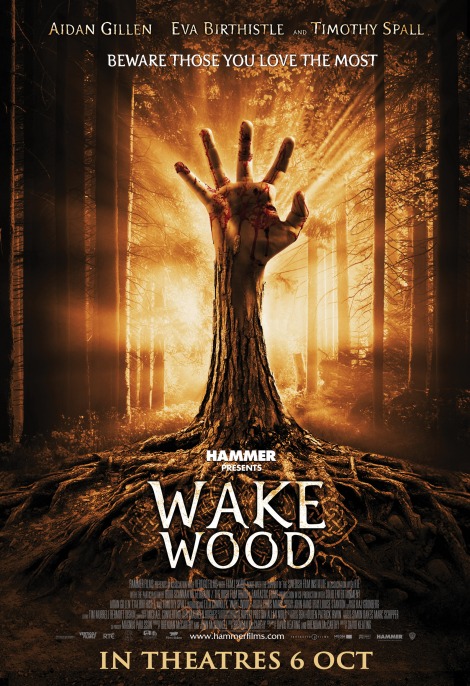 What on Earth could a movie with the words “wake” and “wood” in the title be about? Could it have anything to do with woods? Or being awake? WHO KNOWS! This movie could have been about practically anything! But you were right, it has something to do with woods and being awoken. Except rather than being awoken from a slumber in your bed, it’s from a slumber in the dirt! From death! SCARY!

A little girl is attacked by a dog and killed and I’m already starting to hate this movie. DOGS ARE NICE. The parents of this little girl relocate to a small, isolated town called “Wake Wood“, and basically hate their lives. One night, they see a weird ritual take place that seemingly brings the dead back to life. They ask the guy who was involved in the ceremony and he says that it’s possible, but with a few caveats. It’s stuff you can imagine, like the person can’t have been dead for more than a year, the dead person only has 3 days of life once brought back, the dead person can’t leave town, and the parents need to live in Wake Wood forever. They oblige and their daughter is brought back, but other people in town notice strange things. The parents try to leave Wake Wood, but the daughter starts face bleeding or something. It is also revealed that she had been dead for more than a year, so since her resurrection, she’s been killing people. She must be put to death for the second time to stop the deaths, and this time the mom needs to be sacrificed with her. Once the mom and daughter go back to being dead, the dad resurrects the mom because she was pregnant! And there’s a baby! Yay for things being alive!

Oh yeah, you also have to be born out of a cow or something. I don’t know, but it’s gross whatever it is.

I tend to write reviews shortly after I’ve watched a movie, but sometimes THAT’S NOT THE FUCKING CASE. I feel like I watched this movie years ago, so I don’t really remember it all that well. It had cults and death and resurrection, so that’s always a plus. Wait a second, this movie STARTED with a dog killing a little girl. That’s bullshit! Dogs just want to party and hang out with their friends! If a dog murdered a little girl, it was probably for a good reason. That’s really the only negative thing I can remember about the movie, but it’s a big one. I guess the whole dying to be reborn and dying again thing was getting a little redundant, seeing as how it happened so frequently. And why didn’t someone who lived in Wake Wood get on the internet and tell their buddies to come and revive their friends? Where did they learn the rules about reviving people and the instructions? Did they just keep attempting to revive people in different ways until it happens? All I’m saying is you don’t just go to every town you live and attempt to revive the dead, so who was the first guy to do it? Maybe it was a girl? I don’t know, this movie was just average and made a cool dog look like a shithead. NOT COOL, WAKE WOOD.