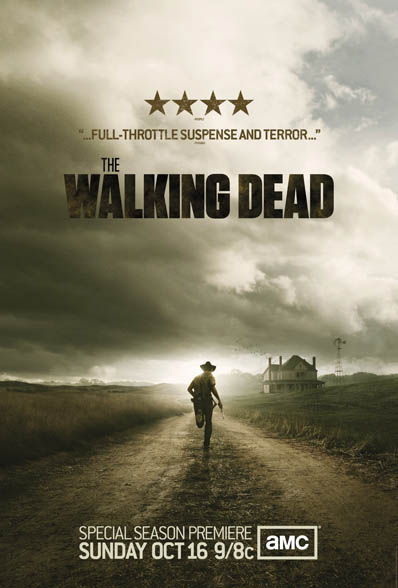 Okay guys, I know the season ended weeks ago, but hopefully by now you all know what happened and I don’t have to worry about spoiling everything. Even though there were complaints that there wasn’t enough going on in this season, there were plenty of behind the scenes drama to make up for it. In July of last year, it was announced that Frank Darabont, who had helped write, direct, and produce the first season. That scared the shit out of most people, knowing he had filmed some of the second season and not knowing the impact it would have on the show. The show had its premiere in October, and it went on a scheduled hiatus, with the other half to debut in February. While it was on hiatus, news outlets started saying that a main cast member asked to be written out of the show when Darabont left, and this cast member had their wish granted. Supposedly that actor changed their mind, but it was too late and they were already written out. Considering that Laurie Holden, who plays Andrea, and Jeffrey DeMunn, who plays Dale, had worked with Darabont on a few movies, my money was on one of them leaving the show prematurely. With a main character leaving and a new director, what hope was there for season two? 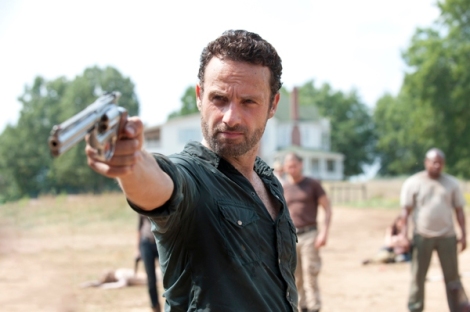 Without going over every single detail, I’ll try to summarize the major events of season two. When we last saw the gang, they had just left the Center for Disease Control because it was blown up by an employee. When the group made a pit stop, the little girl known as “Sophia”, got lost in the woods. While trying to find her, poor little Carl was accidentally shot. The shooter brought Carl and the gang to a farm where people were staying, and where everyone ended up staying. Over their time at the farm, we learned that Lori was pregnant, despite not knowing whether the baby was Rick’s or Shane’s, from one of their forbidden love sessions when they thought Rick was dead. We also learned that Shane was an even bigger asshole who had killed an innocent man so he wouldn’t be slowed down while retrieving medical supplies from a nearby high school. The first half of the season focused on finding little Sophia, but that search ended when she was revealed to have become a zombie and the owner of the farm, Hershel, had been keeping zombie in a barn. The gang also met other survivors and after a violent altercation, saw Rick and Shane take one hostage. We saw the depths that both Rick and Shane were willing to go to in order to protect the group, while Dale understood how much deeper Shane’s depths were than Rick’s. The season ended with Dale getting surprise attacked and killed by a zombie, Shane killing the hostage in cold blood, and Shane trying to take Rick’s life. Rick got the upper hand (ha ha, that’s a good pun if you read the comics) and killed Shane, and unfortunately the zombies overran the farm. The last few moments of the season showed the group realizing that they were living in a Rick-tatorship, if you will, while also introducing us to a woman with a katana and two zombies on leashes and zoomed out to show a prison looming near the group. 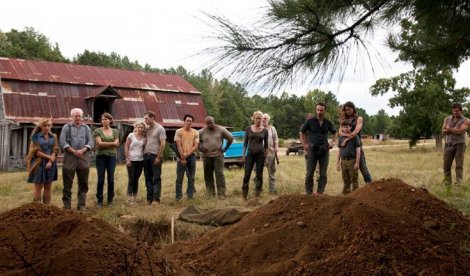 I have to agree that I thought the events of the first half of the season were pretty dull, since it was a lot of just hanging out at the farm and meeting a lot of new characters. Some people completely lost interest with the show at that point, but when Sophia was discovered to be a zombie and no one was willing to shoot her but Rick, I was totally on board. Once the show started up again, I thought things were getting more and more exciting and that the slow pace in the first half was worth it for the events of the second half. Considering Shane was killed very early on in the comics, nobody was really surprised to see him go. In fact, I think some people were even disappointed to see a character who challenged Rick to such a degree get killed off. On the other hand, Dale’s death seemed to come out of nowhere and really solidified my theory about predicting he would be the one who wanted to leave with Darabont. When I thought about Dale getting killed off, I was pretty bummed, because he really brought in a human element to the show. I felt a little bit of comfort when I realized the whole second half of this season was him whining about Shane being a jerk, and that TV Dale wasn’t necessarily the same person as comic book Dale. I think all the comic book fans also predicted the cloaked figure or the introduction of the prison, considering that person and location all play pretty heavy roles in the comics, but I know I didn’t expect BOTH things to happen. I figured it’d be either one or the other, but those last five minutes got me even more excited for the places they’ll go with season three. Considering that the role of the “Governor” has already been cast, all the readers are both excited and terrified to watch the show unfold, and I think all the viewers will be surprised at just how fucked up Robert Kirkman is and what he’ll put his characters through. Even though there are going to be plenty of new characters to meet next season and that we might have a slow start, I’m sure that Kirkman and new showrunner Glenn Mazzara will give us plenty of reasons to make any sort of waiting worth it. 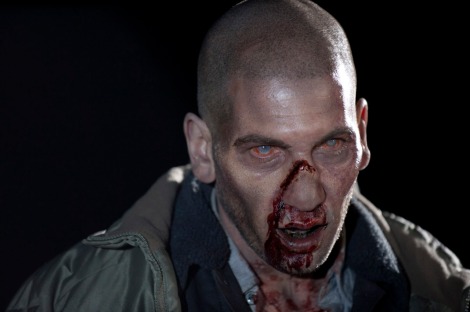 As some of you probably know, I recently attended the Chicago Comic and Entertainment Exposition. One cool thing the C2E2 website did was highlight who were Chicago residents or who had a career in Chicago, and it was highlighted that Steven Yeun, who plays Glenn on The Walking Dead, was attending. I would say one big difference between the TV Glenn and the comic book Glenn is that we’re able to see a much more emotional side of him. In the comics, the driving force of everything is Rick, and it’s not often we see extended sequences of what’s going on outside of Rick’s world. It happens, but only when it directly pertains to him. Although Rick is the driving force of the show, the nature of the medium forces us to explore more of the characters and Glenn’s is a lot more developed, I feel, than his character in the books. It was this season where we met Hershel’s daughter Maggie, played by Lauren Cohan, who we all knew would strike up a romantic relationship with Glenn. The reaction from Glenn on the show had him scared to get involved with her because he was afraid he would lose her, causing what could best be described an emotional ambivalence. He didn’t seem to care whether she liked him or hated him, and didn’t want to further any of those feelings because it might just make saying goodbye hurt more. Glenn eventually left that emotional state as everyone was leaving Hershel’s farm, but I think we all connected with Glenn in a way that was different from how we connect with him in the books, and Steven did a great job portraying that emotional state. I also couldn’t help but wonder if he took that emotional ambivalence towards his cast members as to save himself the heartache. 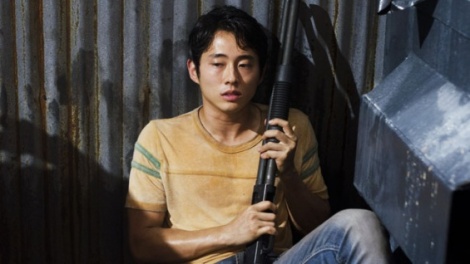 WolfMan: I think season two of The Walking Dead proved that anybody could die, anyone could go away at any moment. Who was the hardest, either actor or character, to say goodbye to this season? Do you know find yourself putting distance between you and other cast members, knowing they could leave at any moment?

Steven Yeun: Every death was hard. I took Jeff (DeMunn) and Jon’s (Bernthal, who played Shane) the hardest. Jon, I knew was coming, but he was someone I spent a lot of time with. And Jeff I spent a lot of time with, too. They were both pretty difficult. As far as keeping distance, no, we know the nature of the beast and I think it’s better to spend quality time and enjoy each other’s company. 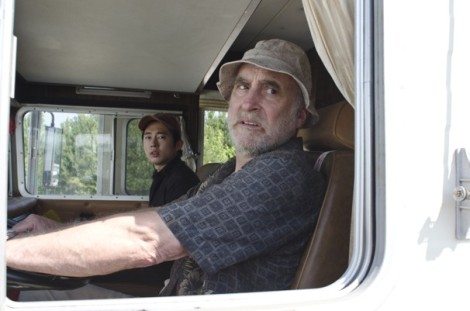 WM: Clearly the show is going in a slightly different direction from the comics. Some things are similar but they are different versions of the same universe. How difficult do you find it to be to portray the television version of a character that’s already ingrained in comic books?

SY: I think our show has found a life of its own and we’re on that trajectory to become its own thing, not to insult the original material. We don’t think about the comic, we think about how things work in this life and all the writers and producers and actors are so great that we all convene and come to a consensus about how things play out. 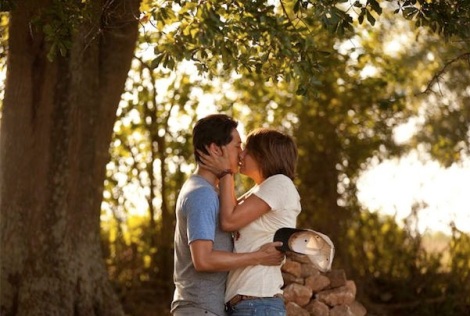 WM: To me, the most surreal moment of the show’s success was the fact that it was referenced in The Amazing Spider-Man a few weeks ago. Not the comic book Walking Dead, but when Johnny Storm had come back from the dead and was catching up on all his TV, Spider-Man had mentioned that “they were still on the farm”. It was kind of crazy to see the success of the show bleeding into other publishers. Was there one surreal moment for you where the success of the show?

SY: Marvel does that, don’t they? That this world is part of their world, right? Every day when you walk around and someone might recognize you from the show, it’s really great. I think we were on an episode of Entourage. Ari said “Tell that guy he won’t be able to get a job as a zombie…”, and he said a lot worse than that. It’s just so cool to be apart of something that people really dig and are really interested in.

WM: One last quick question, do you happen to know what Robert Kirkman’s beard feels like? 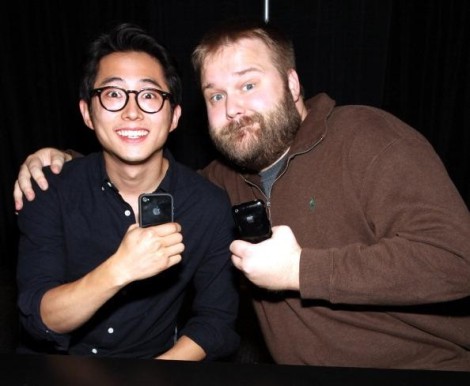 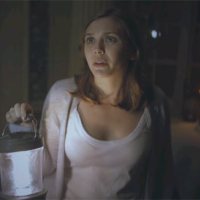