I DON’T LIKE SUPERMAN. I know, that sounds relatively cliché to say, but it’s true. There haven’t really been any Superman stories or movies or anything that I’ve really connected with in any way. I like some of the concepts brought up in Kingdom Come, and I like the “What If?” elements of Red Son, but that’s about it. The only weakness that the character has is a physical object, so as long as he stays away from that object, he can do almost anything. Most other heavy hitters in the comic book world have some sort of psychological issue that can get in the way of how to rescue someone, but Superman is pretty level-headed, making him a little less interesting in my opinion. The main reason that I decided to revisit Superman Returns was that it came out in the summer and it was a warm, breezy night and I wanted to watch something that reminded me of the summer. It hadn’t even dawned on me why it might be a great time to review a Superman movie when Man of Steel comes out in just a few weeks! Oh man! It’s almost like I planned it this way all along! Sadly, it was just a coincidence. Seven years later, there are still some things about this movie that just don’t seem to connect, but to my surprise, there are things that hold up better than anticipated.

Wait, so does he wear underwear over AND under the tights, or does he freeball it? That sounds like a recipe for disaster.

After leaving Earth and just kind of exploring the universe for five years, Kal El (Brandon Routh) has returned to the family that raised him from the time his spaceship crash landed in their backyard as a baby. Resuming his job as a reporter at the Daily Planet and under the name “Clark Kent”, he finds that his old girlfriend, Lois Lane (Kate Bosworth), has moved on and had a child with someone else and has written articles about why it’s a good thing that Superman just up and left. That doesn’t stop Superman from stepping in to rescue Lois and the plane she’s in when there’s an EMP explosion that knocks out the ships navigation, caused by an experiment by Lex Luthor (Kevin Spacey). Having been gone for so long, Superman feels the need to make up for lost time and spends most of his time flying around the planet trying to save as many people as superhumanly possible. Lex, on the other hand, has spent five years developing a plan that involves using elements from Superman’s home planet, fused with kryptonite, to create a brand new continent in the middle of the Atlantic Ocean. Do you think this will actually work out for Lex? No, of course not. Even though he is weakened by the kryptonite on the emerging continent, Superman is able to supercharge his powers by flying that much closer to our Sun, the source of his power, and is able to lift up the entire continent and throw it out into outer space. His personal life might be a little complicated with Lois Lane having a new man in his life, but Superman proves he’s still fucking got it!

Let’s try to be positive and focus on the things that this movie does well. The whole movie looks fucking great. Everything is in soft focus and there are a lot of really warm colors and tones to the whole thing and the whole feel of the movie is reminiscent of the 1950’s. Kevin Spacey’s Lex Luthor is far more comedic and dastardly than he is maniacally evil, but it really fits the tone of the film and his performance is really fun. Also, Sam Huntington as the Daily Planet photographer Jimmy Olsen is also really entertaining to watch, as well as Routh’s bumbling and goofy Clark Kent. Routh’s Clark Kent plays really well with Lois Lane and that relationship feels like movies from the 40’s and 50’s where no matter how handsome or debonair a leading man might be, the lead female still won’t give him the time of day. The action sequences, especially the first one involving a plane crash, are really, really cool. Especially considering how the entire feel of the movie is that of an older time, the action feels really spectacular. Even though I mentioned one reason I don’t like Superman is because he feels too perfect and invincible, I don’t think I’ve ever quite grasped his power until one sequence in this movie where a robber is using a GIANT chain gun against Superman, who merely walks confidently into the gunfire. This not only deflects the bullets back at the criminals, shielding innocent bystanders, but also allows the viewer to see what happens when a giant bullet is shot DIRECTLY into Superman’s eye. Well, being bulletproof, Superman doesn’t even blink as the bullet crumples onto itself and falls to the ground. No matter how much shit this movie might get, that segment is fantastic. 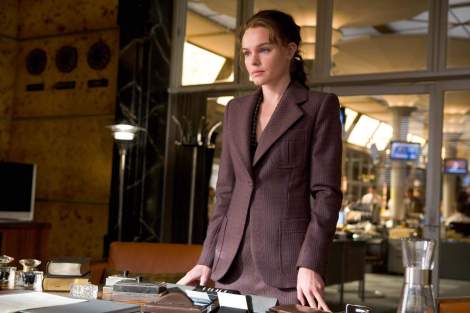 “Just think of all the doors this will open for my career!” – poor, poor disillusioned Kate Bosworth

Sadly, a lot of the other shit that this movie gets is completely justified. Although Routh’s Clark Kent works well, he looks and feels a little too young to pull off the Superman personality. Even if his Superman is a little lackluster, it is FAR more engaging and interesting than Bosworth’s Lois Lane, which is absolutely forgettable. I could see that the filmmakers approached the movie by intentionally casting relatively unknowns, but in this instance it just didn’t really pay off well. The biggest problem is just the entire premise of the movie. There’s a lot of talk about what the world was like when Superman was gone, but we never really saw whether or not that world was good or bad. It was like the movie wanted to be a remake but felt like it would be disrespectful to all the previous movies by hitting the reset button. A big complaint with Superman stories is that he always wins, so I could see what they were doing by trying to make Superman “lose” Lois Lane, but she still had HIS child, so did he really lose her?  Oh, and the master plan of Lex Luthor building his own continent and having that continent thrown into the Sun as your climax was really underwhelming. It sucks, because the action sequences were good up until then, and I guess that scene was able to show just how powerful he was, but lifting a giant rock into the sky wasn’t all that exciting.

I do have to give this movie credit for making Kevin Spacey and Parker Posey on on-screen couple.

I mentioned that the scene where a bullet crumples up against Superman’s eye is one of the best sequences in all of the movies when it comes to showing his powers, but Superman Returns had another really powerful scene towards the end. Considering he had been stabbed by a shard of kryptonite, immediately after Superman throws the continent into the Sun, he collapses back on Earth and is immediately rushed to the hospital. Doctors remove the shard of kryptonite from his side, but when they try to give him injections, the needles just keep breaking against his skin. Even though the audience knows that there’s really not much these human doctors can do to help an alien, the scene was much stronger at showing the lengths that humanity was willing to go to save Superman. Remember the scene in Spider-Man where New Yorkers all started throwing trash at the Green Goblin? This hospital scene was very similar to that, except with a much more serious, somber tone that fit the mood of the film. There are a lot of strong things this movie has to offer, definitely a lot more than I remember, but there’s still a lot of flaws that stand out more for people than the strengths can.

Just two best friends who always get along
Make ‘em all shorter!
Pretty happy with my big boy Easter outfit! (In 2.39 in honor of @deancundey_asc)
Happy birthday to these two best friends! Mara is 13 and Eleven is 4!!!