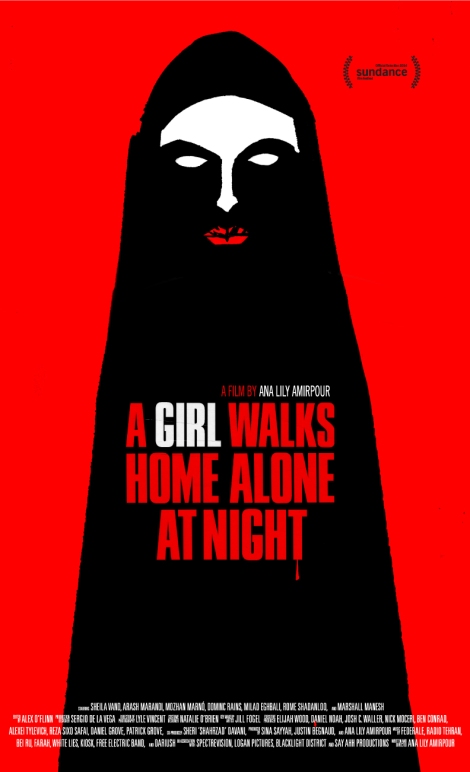 One phrase that doesn’t automatically come to mind when you heard that a film is about a female vampire in Iran is “artsy-fartsy”, but that’s a term that I kept hearing. Some people might take that as a deterrent from checking out a movie, but I know that one of my favorite films from last year, Only God Forgives, was also described as “artsy-fartsy” so I took that as a good sign. Also, seriously? WHAT THE FUCK DOES ARTSY-FARTSY MEAN?! Is it meant to be an insult to say that a film is attempting to be a piece of art? That there could possibly be less focus on narrative and more experimental approaches to the audio/visual elements? HOW DARE THEY! With A Girl Walks Home Alone at Night, I got to see a panel with writer/director Ana Lily Amirpour, and when she came out wearing a shirt with David Lynch’s face on it, I knew that this film would be exactly the kind of art and farts I was looking for, and I was right.

Why anyone would live somewhere called “Bad City” is beyond me, but that’s where our story takes place. You’d think that the girl of the title, played by Sheila Vand, would have the entire film revolve around her, but instead, she plays as a mysterious figure that ends up in the lives of a few different residents of Bad City. Arash (Arash Marandi) gets mixed up with the drug-dealing pimp Saeed (Dominic Rains) because of his father’s drug habit. This results in having to forfeit his most important possession, his car, over to Saeed. Our vampire sees the way Saeed handles his affairs, so she follows him back to his apartment one night and “handles” things in her own way. Once you see the movie, that joke will be hilarious. After a drunken night of partying, Arash bums into “The Girl” and the two end up back at her apartment listening to synth-pop and falling asleep. The two realize that, regardless of what kind of bad things the other might have done, those faults are willing to be overlooked so long as they can both finally get out o f Bad City and that they can both do that together.

Despite Amirpour speaking about her influences during multiple Q & A’s, you don’t need to hear her talk to see those influences on-screen. The disjointed narrative and imagery of 1950’s Americana feels in the vein of Lynch. The ridiculous gangsters and impeccable music choices feel very Quentin Tarantino. Even though she didn’t cite him as a source, the cinematography and lead characters who speak in very few words and have very simple pleasures in life feel like Nicolas Winding Refn. Your first feature film being compared to your influences shouldn’t be a bad thing, because she happens to have fantastic influences.

Yes, the lead character in this movie is a vampire. No, this is not a horror movie. Clearly Armipour has an interest in the macabre and bizarre, but A Girl Walks Home Alone at Night focuses more on emotional vampirism and the loneliness of eternal life than the gruesome elements of a vampire’s daily activities. When she’s home alone, we see our vampire doing what any other lonely girl might do, which is put on some records and maybe dance around a little bit. Hell, that’s not even limited to lonely girls! I do that too! While she’s out at night, her traditional Iranian headwear adds to the imagery of her being a creature of the night, but once we see how vulnerable she is while alone, rather than looking like she’s stalking her victims, she’s clearly just trying to observe other people and the relationships she’s incapable of having. Arash also feels some of this detachment in his job as a landscaper for a rich family, being forced to see how they go about their daily lives and knowing that, with the commitments to his father, he’ll never be able to live like them. When The Girl and Arash find one another they can both accept one another for who they really are regardless of whatever hangups might keep them from forming relationships with other people.

One of my favorite segments in the film, possibly of all of Sundance, is a segment where The Girl lets Arash into her room to listen to her records. No matter who you are, no matter what you musical preferences, one of the best feelings in the world is sitting alone in your room listening to your favorite music. In juxtaposition with that, one of the scariest feelings in the world is playing a song you love for someone you care about while running the risk that they might not connect with it in the same way that you do. When The Girl puts a record on, we hear the song “Death” by the band White Lies, and The Girl chooses to stand at the record player. An incredibly vulnerable moment, a wonderfully shot scene and a fantastic music choice. The whole film culminates with someone as simple as Arash walking up behind her while the song is playing, confirming that his passions and desires coincide with hers and the joy that these two have stumbled into one another’s lives. Sure, I can see why someone might call a slow-paced reinterpretation of a vampire movie full of beautiful imagery might be “arsty-fartsy”. To people who enjoy as much attention to the mise-en-scène and musical choices as the narrative, then A Girl Walks Home Alone at Night will comfort you with the hope that no matter how lonely, weird, or vampiric you might be, one day you might find someone to hang out with you in your room while listening to your favorite records.