It was almost a year ago now that I posted my review for Cheap Thrills, and if you guys follow me on Twitter, I’m sure you’re goddamned sick of me talking about it. Well now that the film is finally being released on VOD on February 21st, you’ll finally fucking see what I’m talking about! The problem is that it’s a movie where the more you talk about it, the more a viewer can get confused with what to expect. It’s funny as shit, it’s dark, it’s twisted, and a bummer. With such a small cast spending two weeks in a house together filming, if they don’t all pull their weight, the movie will flop. Luckily, the entire cast is fantastic, especially Ethan Embry and Pat Healy and their incredibly tense former friendship. These two fucking killed it and I was happy to sit down and talk with them about their experiences filming such a dark and intense film. As a disclaimer, the night before this interview took place, the film was screened with a series of dares for the audience to participate in, from getting a tattoo to dipping your balls in a concoction of hot sauce. Oh yeah, and one member of the cast (who will go unnamed) was real drunk during the Q & A.

WolfMan: This movie’s fucking awesome. I think you guys know that from me talking about it all the time.

WM: And what else matters?

EE: In this context? Not much.

WM: But it’s a difficult movie to talk about without giving things away. As you’re watching it, you don’t know where it’s going to go next and you don’t know how it’s going to escalate. I really don’t want to give anything away because I don’t want to take any enjoyment away from the audience. The big thing that sells the movie is your friendship, or your past friendship.

EE: Let’s call it a “relationship”.

WM: Did you guys know each other before the movie?

PH: We met for 2 seconds when we were doing our makeup tests. He’s a lot more gregarious than I am and I think we probably just had different styles of acting, in general, but I think it was very good casting because there was real tension. At the end of the day, neither of us hated each other or were in any real danger.

WM: Now would be a good time to admit you hate each other though.

PH: A Wolfman exclusive. (laughs) A really great moment, for me anyway, and I know we’ve talked about it a ton, after the big sort of crazy moment in the movie, we had this scene that was like a page or two long that we just had to shoot really quickly, which was just he and I talking, and on the page it’s really just an excuse to make some time go by for something else to happen, but it was an amazing scene because of what we had just been through emotionally and through the filming of the movie and it’s just us talking about it’s a two camera setup and what you see is what you get. Us really connecting. It’s a quiet moment, which the movie’s not full of, but we were very connected at that point and I thought that it was what it’s all about. To go through all of that to get to that moment, it’s worth it.

EE: And I think what you said about us just having different styles. Like if I get hit, I like getting hit.

EE: And it comes down to something as simple as that. I hit him a couple of times.

PH: And then I didn’t mean to, but unconsciously I probably wanted to.

EE: And I fucking loved it. It was probably funny enough, and I thought that that moment was the most connected you and I were.

PH: To be fair, the move…George Wilbur coordinated the fight, and Ethan wanted another move, and…I felt bad. I gave him a black eye.

PH: And for me, there’s no right way or wrong way to act. If you want to act like Abraham Lincoln, then that’s fine because the proof is in the pudding. He’s great in the movie, but I did buy him a carton of cigarettes because I felt bad.

EE: And those aren’t cheap.

PH: And we had one more day of shooting, and what we had to shoot was the beginning of the movie.

WM: And Pat just won’t stop bragging about how strong of a puncher he is.

WM: How good of a KICKER he is.

PH: We did this scene, and he’s on the ground, and I knew that the camera was behind him and that I wasn’t close and that I had to kick him in the face.

EE: I actually asked you to put your boot on my face.

PH: And then what happened was I looked at the thing and I just lost my mind but they didn’t actually use that take.

EE: It was great, because then in the next scene I have this fresh bootprint on my fucking face.

PH: And what follows that is fucking brutal. The one thing about the movie that people always ask about “When would you stop and what would be too far?” and I just look at the movie and I know it’s a good script is because everything that happens logically follows. As crazy as any of that stuff is, if you were in the middle of it, like Compliance too, if you were there, it wouldn’t seem that crazy of a time. It might, in retrospect, like talk to David (Koechner) about last night, and at the time, if I were in the same situation, I doubt I would go so far as to murder someone, but when you’re in the quicksand, you’re just trying to get out and you’re struggling and you sink deeper into it. (To Ethan) You told me you’d cut your finger off when we were having dinner together.

WM: Just for fun or for money?

EE: I think that’s why the movie as a whole works, because, depending on, if I had to, depending on who it was, I’d go as far as you. I think my character gives you enough reasons to justify.

PH: It’s not like I’m unprovoked, you see it, but at the same time…that’s another great thing about his performance. The vulnerability that comes out at the end and the humanity, and there’s tragedy in that.

WM: It’s not an entire 180 degree turn for either character, but the perception of the characters switch.

PH: Even Ethan’s hat falling off tilts it. It’s actually my favorite stuff in the movie, and the way it’s shot in the movie, it’s beautiful. That whole sequence when the slideshow is on and all that stuff, it’s great. I don’t think anything could happen in the movie and our relationship and performances included,  without the crazy way that the movie was set up. And only because there wasn’t a lot of money all of the time. It was crazy, and we just kind of had to be there and do it.

EE: There was talk about if it could be done as a play.

WM: And Dave had talked a lot last night about how it felt like a play on set.

EE: Did you actually decipher anything he said last night?

WM: I know he made it rain on someone, I remember that.

PH: What makes it like a play is that you don’t really get to work scenes, long scenes, with actors where you’re acting with them. It’s usually bits and pieces or it’s coverage. With this film, we had these two cameras and we had to learn these scenes and they were long scenes and you had to look at each other and do these scenes. The budget and everything kind of forced that, but I prefer it because we got to actually do real acting with one another. 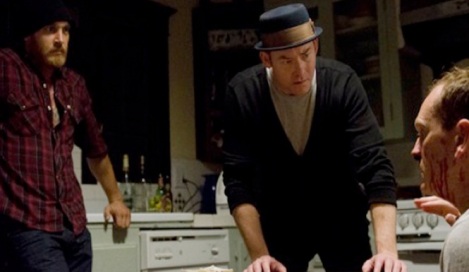 WM: You guys have both had these diverse careers, where you’ve done teen comedies–

WM: Right, but through your work in theater and Pearl Harbor, you’ve all just kind of dabbled in these big movies and smalls movies and all over. Now what is it that you guys love doing the most? Is it just whatever the next challenge is or are you looking to go even weirder?

EE: Is that possible? (laughs)

PH: We look for the next challenge, neither of us are independently wealthy, we need to work. I’ve been lucky that the things that have come to me are the things I’d like to do, for the most part. Sometimes things like this get seen by bigger people in the business and you get offered opportunities in the business to make more money, and I know Ethan’s getting a lot of work now and is working consistently, and that’s starting to happen for me too. Just because I went and did these smaller movies and people saw them.

EE: Ya know, I grew up in a fucking trailer park in East L.A., but then I played preppy fucking make it rich punks, or underdogs. I always felt it wasn’t a true representation of who I am. Lately I’ve been trying to go more towards the things that draw me in, what I would go see, and represent who I am a little bit more.

PH: I think that’s been happening for me too. I might know myself better now so I’m more accurately able to represent myself on-screen.

EE: But you said it yourself, sometimes it’s about getting the next fucking gig. (laughs)

WM: Wait, neither of you are independently wealthy?

PH: Well I’m not, but I can’t speak for Ethan. I know he was in a pretty rough spot before we did the movie.

WM: You guys work so well together, and again, I’m a big genre fan, so seeing you guys both pop up in these different genre things. Between The Innkeepers, Compliance, and now this, these are some of my favorite movies of the last year, and I see your ball picking up steam.

PH: Into a bowl full of hot sauce.

EE: Did you see the aftermath?

PH: You don’t count. You’d do anything for this movie, and you’ve already seen the movie. It’s ballsier for someone who hasn’t seen it.


Cheap Thrills is available on VOD on February 21st and in select theaters March 21st.