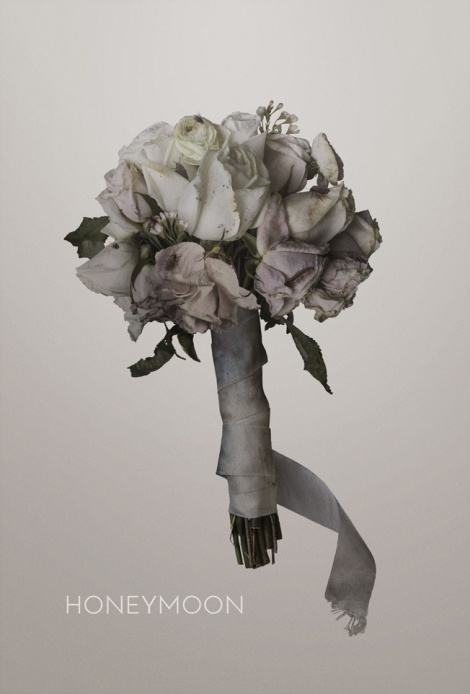 When you’re at a film festival, everybody wants to know what the fuck you’re seeing. It’s like, GUYS, A LITTLE PRIVACY? Can’t I just enjoy these movies in peace?! I then refuse to tell them what I’m seeing. Although, admittedly, that’s because nine times out of ten I have no goddamn clue what the movie I’m going to see is about. Going into Honeymoon, I learned that it was about a couple on their honeymoon. WAIT, I GET IT NOW, THE TITLE IS ABOUT WHAT THIS COUPLE ARE DOING…RIGHT? Turns out that Honeymoon is also the debut feature of writer/director Leigh Janiak and it also happened to be the opening Midnighter of the whole festival! No pressure or anything.

Through watching a video of their wedding night (not like that, perverts), we are shown the intimate details of Bea (Rose Leslie) and Paul’s (Harry Treadaway) before seeing their idea of a honeymoon. Not a tropical locale, but Bea’s family lakehouse, which appears to be exactly the kind of vacation the two need. While the two sleep, a bright light shines in through the window, pausing momentarily on Bea’s face before cutting to the next scene. Probably nothing, right? Yeah, probably nothing, since Bea seems totes norm the next morning. Bea and Paul go to the nearby restaurant and bump into one of Bea’s childhood friends, acting violent and erratic, along with his wife who seems totally despondent. Bea doesn’t seem as surprised by this as Paul does, but not NEARLY as upset and confused as Paul gets when he finds Bea naked in the woods in the middle of the night without any memory of how she got there. Guys, I think something fishy is going on. As Bea starts forgetting more and more details about her life, Paul checks in with her childhood friend and starts to uncover the truth about what is really going on with Bea. SPOILER: there are aliens. I mean, that was obvious though, right? There are aliens involved? Yeah, probably.

Seeing movies at a film festival normally comes with the advantage that you’ll get to hear the filmmaker talk about their film immediately afterwards. In the case of Honeymoon, I actually ended up liking the film less. Weird, right? As Janiak started to explain a little bit more about her inspiration and influences, she mentioned both David Cronenberg and some elements of the film that were meant to be abstract. While watching the film, I was taking the events literally and accepted it as at face value, when I started thinking about the events serving as more of a metaphor, I felt a little let down. The performances were good and the chemistry was there, even if there were awkward “hey here’s a cute unique thing we do with one another”. There were definitely a handful of creepy moments, but the metaphors of no being able to identify or connect with the person you’ve agreed to spend the rest of your life with felt like too thin of a stretch. Granted, that’s a hard feat to accomplish, but it did make me really want to watch Zulawski’s Possesion. I hate pointing out when a director shows potential or will be one to watch out for, but it definitely feel like Janiak is destined for bigger, and weirder, body horror with some sci-fi elements. If you take Honeymoon superficially, it’s a solid, slow-burning abduction story, but don’t dig too far down or you won’t find as much as you’d hoped for.