It’s been eight years since the beginning of the Marvel Cinematic Universe and we FINALLY get to see the story of white man whose genius is only exceeded by his ego who suffers a crippling physical injury that will force him to find new ways to heal himself, only to realize what his true gifts really are, and use those gifts to protect the world. FINALLY!!!!!!!! Okay, yeah, that sounds familiar, because stories like that are what have made Marvel Studios billions of dollars. So, with Doctor Strange, how will Marvel change their tried and true formula to show the world there’s more to their super heroes than white men? Well…uhhhhhh….let’s try to find out!

Cape or not, you shouldn’t stand this close to your TV when watching Inception on 4K.

Stephen Strange (Benedict Cumberbatch) is a brilliant surgeon who is also a huge dick. After irreparably damaging his hands in a car accident, he realizes traditional medicines won’t cure him, so he seeks more mystical methods. In Nepal, Strange learns of the mystic arts from The Ancient One (Tilda Swinton) and Mordo (Chiwetel Ejiofor), while also learning there are those out there who seek to use darker magic to unleash hell upon earth, like Kaecilius (Mads Mikkelsen) aims to do. Good guys fight bad guys, everyone uses magical spells, a cape helps Doctor Strange fly, and the good guys win. SORRY, SPOILER ALERT, THE STATUS QUO IS MAINTAINED AT THE END OF THE MOVIE.

Careful, Sherlock, it looks like you’ve become a ghost!

Marvel films are often chided for being formulaic, and in the case of Doctor Strange, that assessment is 100% true. Man oh man, it was rough getting through those first 45 minutes. There are so many arbitrary decisions made by characters that it seems like the only thing running through the filmmakers’ heads were, “Well, this needs to happen at some point, so it might as well be now.” For example, when Strange shows up at The Ancient One’s temple, he just kind of acts like an asshole, Ancient One reveals everything she knows about other dimensions and spirituality, Strange is kicked out of the temple for not being eager enough to learn, so he hangs out in front for a couple hours before being let back in. WHY DID HE HAVE TO GET KICKED OUT IN THE FIRST PLACE?! In his time outside, we saw him learn nothing nor change his view of the world at all. During his training, he has a hard time learning a teleporting spell, so Ancient One drops him off on Mt. Everest alone where he is forced to find his own way back. We then cut back to Ancient One and Mordo in the temple, waiting for Strange to show up. Strange…shows up. The audience doesn’t witness anything change about the character that finally motivated him to comprehend casting the spell. Why couldn’t he have just easily done it from the beginning?! Arguably as much as Tony Stark, Doctor Strange is known for the style of his goatee. In the film, Strange grows a beard while at the temple. One day, he shaves it into a unique goatee. WHY DOES HE DO THIS AND WHY DOES IT MATTER? Sure part of this is symbolic because he had difficulty shaving due to his injured hands, but, why the hell does he make it so fancy? He has facial hair like no other person in the movie, and there wasn’t anything like him taking inspiration from another sorcerer or a relic of a wizard guy or…whatever, I don’t care. He gives himself fancy facial hair for no real reason. I legit wish this movie was 25 minutes shorter and the training stuff was replaced with a “Some amount of time later…” title card.

Probably don’t do drugs before seeing this movie. Or rather, probably do drugs? I don’t know man, it’s your life.

Okay, so the first half of the movie is pretty rough, but once Strange knows how to use his powers, there’s some really cool stuff. Sequences of Strange traversing through other dimensions and universes are pretty bananas, which I believe we can thank director Scott Derrickson for. Derrickson really took inspiration from cosmic illustrations by Strange creator Steve Ditko, and although some elements feel familiar to what we’ve seen in the Thor films, we’ve never seen visuals taken to this degree in the MCU. One sequence that takes place in the Mirror Dimension, that looks like the real world but can be manipulated by sorcerors, is disorienting and jarring and kinetic in all the right ways. Remember the cool sequences in Inception and The Matrix where physics went out the window? Well, they’re like that, except longer. Unfortunately, that also means we’ve seen these devices before, just now we get longer sequences there.

Only a white woman could truly be this bald!

In the comics, The Ancient One has been drawn as Asian.  In the film, Tilda Swinton is not Asian. Considering the MCU is full of white people, we did not need another one person, especially when portraying a character that’s always been Asian in the comics. Having seen the film, there’s nothing I saw that made Tilda Swinton a great choice for the character. Not that she did a bad job, but the role could have been played by anyone of any ethnicity or of any gender or of any age and the results would have been the same. No excuse I’ve read from anyone involved in the movie is adequate, and it was just a dumb decision. The character was not written as a wise elderly Asian stereotype, so any performer could have pulled it off without audiences thinking, “Oh great, another Mr. Miyagi.” So, bad choice filmmakers. The casting of this role might have been considered a lose-lose situation as far as cultural sensitivity, but casting Tilda Swinton was the worse choice to have made. 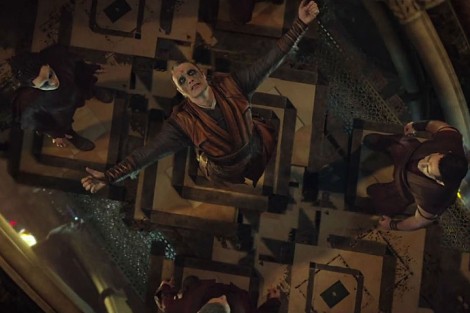 Still waiting on that hug from Will Graham, huh?

Another thing that Marvel is often criticized for is their unimpressive villains, with only really Loki having stood out in all 14 films, but I did find Kaecilius quite compelling. Each of these movies treats the villains like they really could potentially destroy the world, but they are defeated within the film and never seen again. However, Kaecilius admittedly isn’t the one to bring about the world’s destruction, but merely opening a gateway for Dormammu, a demon kind of being that is massive and–you know what? Doesn’t matter. What matters is we got to see an intense villain who himself wasn’t trying to convince the audience he was all-powerful, so his shortcomings and minor defeats seemed more believable and like less was at stake. Oh yeah, yet another criticism of the MCU is their treatment of women, so I should point out that Rachel McAdams is in a few scenes of this movie as the “love interest I guess, whatever” character. I really think Strange’s cape should have been billed over her.

Hey! None of those crazy visuals from any of the trailers matter at all, because it’s in the Mirror Dimension. Just a heads up.

The film’s opening sequence shows building twisting and turning and composing themselves in new ways, while nothing gets destroyed. I sat there thinking, “Why the fuck is any of this happening and why does it matter?” Once the concept of the Mirror Dimension was explained, I understood the opening sequence, but the concept of the Mirror Dimension accurately acts as a metaphor for this movie. Doctor Strange has stuff that looks cool and spectacular, but none of it carries any weight and everything is easily put back into its place without anyone noticing. Cumberbatch is much better is a calm, collected sorceror than he is a vain student trying to understand the mystic arts and making jokes about Beyonce and Eminem (yes, that happens in this movie). Strange will make for a fun supporting character to play off Tony Stark, but this is a franchise that won’t need its own sequel. Although not abrasively bad, Strange only barely keep its head above water, probably thanks to the Cloak of Levitation, which at times has more personality than any of the characters on-screen.