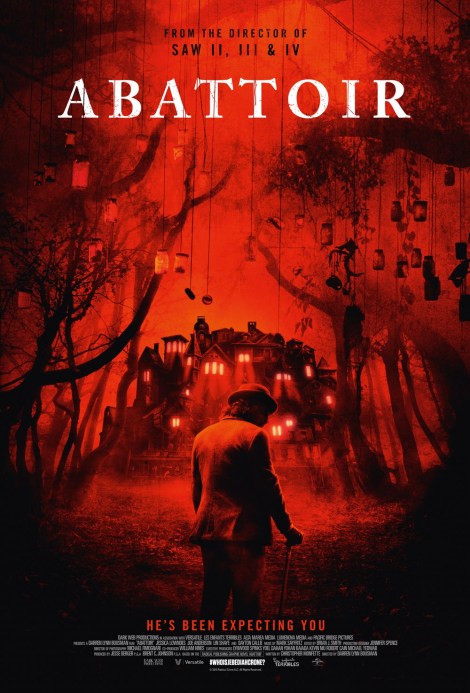 I can’t say I’m super familiar with all of Darren Lynn Bousman‘s work, but from what I have seen, it’s always been pretty stylish. Whether you like that style or not is up for debate, but the guy knows what he likes and goes for it. Repo! The Genetic Opera wasn’t really my thing and I know there’s a growing fanbase for The Devil’s Carnival, so I figured at worst, Abattoir would be a movie other people would tell me they’d like and I could judge them. At best, this would be, I don’t know, I guess a good movie? POINT IS, I knew there’d be something I could take from the experience and, well, I was wrong. 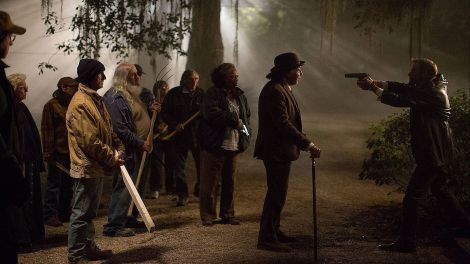 Put that gun away! It’s not gonna be able to stop a spooky bad guy!

After a young woman’s entire family was murdered for seemingly no reason, she begins searching for answers. When she tries to visit the scene of the crime, despite the house having been sold, she discovers that the entire room where the murders took place has been removed entirely. What the hell? That’s weird! The buyer of the house has been linked to buying other houses where violent murders have occurred, which gets out protagonist interested. Her search for meaning among all these horrible crimes leads her to the town of New English, a place full of weirdos that has a dark past thanks to some sort of evil pastor type of person. Or something? Point is, someone is building a house out of pieces of houses where bad things have happened. Oh no! Will they do it?! Guess you’ll have to watch Abattoir to find out!

A knife? What’s a knife gonna do to stop a spooky bad guy?!

I know what you’re thinking: “What the hell does ‘abattoir’ have to do with anything?” See, that’s another word for “slaughterhouse.” GET IT? DO YOU GET IT NOW? THE BAD BOYS ARE CREATING A LITERAL SLAUGHTERHOUSE. For as silly as that concept is, the film pulls it off about as seriously as it could. Aside from the tone, I wish the concept was explored a little more, because this felt more like a murder mystery than something supernatural. Other than looking pretty slick and having an interesting concept, Abattoir doesn’t have much else working in its favor. Lin Shaye‘s inclusion felt like a wasted opportunity for a good actress, the supernatural elements didn’t come together, and the “twist” ending could be seen from early on. This movie might be worth checking out if you’re a fan of Bousman’s other films, but it’s ultimately a disappointing exploration of a somewhat interesting concept, and considering the story is based on a comic book, I think some of the story’s effectiveness was lost in translation.