Please, for the love of god, whatever you do, do not confuse this 2016 film, The Boy, for the 2015 film The Boy. See, this film is set in England, which means we’ll get the chance to hear star Lauren Cohan‘s genuine British accent! That other The Boy? Psshh, there’s no British people in that…I don’t think? Anyways, I know this movie didn’t get that good of reviews, and I know it’s rated PG-13, which many people automatically veto as “horror,” but sometimes it’s good to see what preteens are checking out in theaters and, sometimes, the limitations of a PG-13 rating challenges the filmmakers to be more creative. So, is The Boy forgettable, dull drivel or an inventive attempt at scaring kids? Let’s find out!

Maggie, watch out, there could be a WALKER behind that painting! Like from your hit TV show, The Walking Dead!

Greta (Cohan) is a nanny who has just accepted a job at a spooky old mansion, The owners of the mansion say that they’re very selective over who watches after their son Brahms (is that a real name?) and Greta is immediately intimidated. Once she comes face-to-face with Brahms, she is both relieved and weirded out, because Brahms is just a doll. On the one hand, how hard could it be to take care of a doll? On the other hand, why the fuck is she getting paid to watch a doll? After talking to the grocery boy (Rupert Evans), Greta learns that Brahms actually died, or rather, was killed when townspeople thought the 8-year-old killed a friend of his in the woods, causing Brahms’ parents to grieve for him using a surrogate. The parents leave Greta to watch over Brahms for a vacation, but then her clothes and jewelry start mysteriously disappearing and moving throughout the house. Greta even notices Brahms moving around the room when the door is closed. What the hell is going on?! Well, I won’t reveal what’s going on, but, it’s spooky! 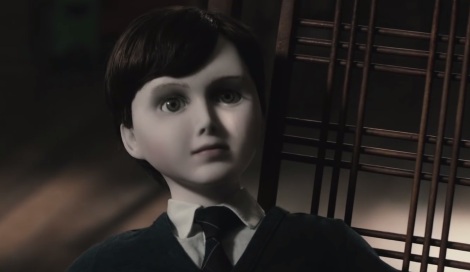 Guys…I had a lot of feelings during this movie. Firstly, remember how excited I was to hear Cohan’s real accent? Well, guess what? They made her character from America, which didn’t really heighten anything or make any beats of the story more compelling. Boo. The Brahms doll was wonderfully designed, as it wasn’t something sterile and sweet but also wasn’t obviously an evil fucking doll, like the one in The Conjuring. There was this weird blankness to it, while also looking human enough that it was just visually unsettling. I think the doll from PIN was the last doll that made me feel this uncomfortable, but not quite as much. Most of the scares and story beats were dull and predictable, so once I got over the weirdness of Brahms, I got bored and thought this movie sucked. However, there’s a reveal in the third act that took me by surprise and was an interesting turn of events, which drew me right back in. Sadly, I felt that the reveal opened up a whole new realm of possibilities for the movie that could have turned a mostly predictable PG-13 movie into something else entirely, but the film couldn’t fully commit and ended in a lackluster way. I read that the original version of the script was a more intense R-rated story that was toned down, but I would’ve LOVED to see what the filmmakers would have done had they been able to get weirder. Is this movie good? No, not really, but it definitely had some bizarre ideas and helped make a genuinely unsettling doll as an antagonist, so I’m crossing my fingers that we one day get a remake that will do the concept justice.