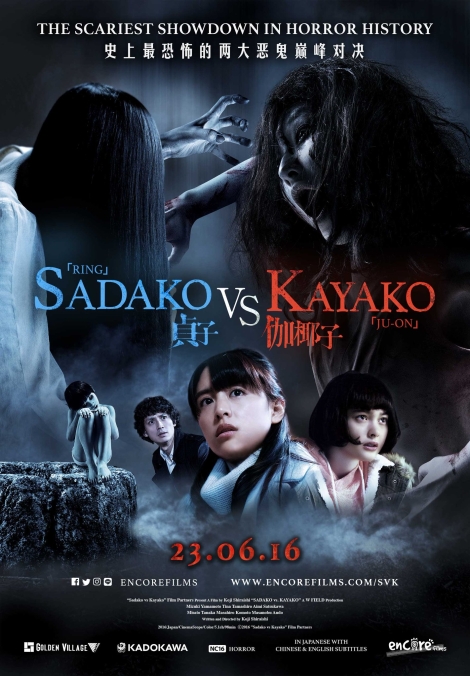 Freddy vs. Jason. AVP: Alien vs. Predator. Batman v. Superman: Dawn of Justice. What do all these movies have in common? They combine two well-known characters/properties and make them square off against one another. What’s another thing they have in common? They all fucking suck. Okay, well, I actually think Freddy vs. Jason is fun, but it works better for the joke if I pretend I didn’t like it. The reason I did like it is because the characters are very different from one another and the film gives at least some explanation of the characters’ mythologies so viewers can understand why they’re fighting. So what happens when you take the two ghouls who take most of the responsibility for bringing the pale faced, dark haired supernatural specters into the horror film zeitgeist? Why, you get Sadako vs. Kayako, of course!  But is it any good? Well, how about you read this review and find out, dummy. As a warning, (no, not a spoiler warning, I won’t give too much away) I’m much more familiar with The Ring and The Grudge than I am Ringu and Ju-on: The Grudge, so I apologize in advance if I confuse any details that are different between the remakes and original films.

I’ve heard of having monkeys on your back but this is just ridiculous!

A young girl needs to transfer her parent’s wedding VHS onto DVD for their anniversary, so she buys a VCR that already has a tape in it. Yup, that’s right, it’s the spooky tape that is accompanied by a phone call and your death two days later. In another part of town, a young girl moves into a new house and after a strange series of occurrences take place in the boarded up home next door, she investigates. Yup, it’s a haunted house full of spooky ghosts. Luckily for the two cursed victims, a ghost hunter and his blind, pre-pubescent female accomplice know just what to do to get rid of both curses once and for all! Sadly, I won’t tell you what must be done, but you already knew this movie has a “vs.” in the title.

“Oh man, this will look so cool on my shell of antiquated forms of media!”

Despite this movie being predicated on two J-horror icons colliding in an epic battle, most of the film plays out like any other installment in the Ringu franchise. However, I did find the justification for why the spooky tape resurfaced to have been clever and made sense, because it’s not like anyone’s actually using VHS tapes anymore. However, I would’ve also enjoyed seeing the tape come into the possession of some genre fanatic that was stoked that the tape was an original X-rated cut that came in a clamshell box that he found on the way to that stupid Jerry Maguire VHS store, but there’s always the sequel. Anyways, the Ringu elements made sense and felt fresh, but the Ju-on elements felt like, “Oh yeah, and this house is still here and I guess ghost hunters still know about it.” The film probably could have been called “Ringu 5 and A Little Ju-on,” but that’s not as snappy.

Hahaha I forgot, this film implies that Sadako’s hair is deadly, like she’s the inhuman Medusa from Marvel comics.

Alright, so the premise works well enough, but how good is the movie itself? Well, each sequence involving Sadako and Kayako reminds you why those movies blew up the way they did; they’re fucking terrifying. The Ringu elements teased the contents of the VHS tape for a while, instead of giving it all away right up front, and the Ju-on sequences and that weird moan coming from Kayako are just as scary as ever. Unfortunately, like all those other vs. movies I mentioned earlier, the films try to introduce the conflict in the first act, but Sadako vs. Kayako took much longer and the combination felt totally arbitrary.

Once the ghouls collide, there are some really fun and really goofy sequences which, without looking back at, I’m sure were all given away in the trailers. The effectiveness of the characters is how little they do and say when on-screen, so trying to create any authentic reaction from soulless monsters was nearly impossible, so seeing them collide was pretty wacky. Again, not having their entire backstories memorized, I don’t know if it would have been possible to have given the two spirits some sort of confrontation or connection while they were alive to explain the supernatural animosity towards one another, but there wasn’t much more than “Well see they hate each other because they are in the same room!” That could’ve taken, what, an extra week’s worth of writing? Oh well. In ways both good and bad, once the audience (me) began to lose patience with the film, it just ends abruptly. It’s like the filmmakers all realized, “Hey, we finally made Sadako fight Kayako, why are we still making this movie?” and everyone packed up their gear and left. Ultimately, Sadako vs. Kayako gives you twice the amount of creepy sequences from some of your favorite J-horror ghosts and it’s kind of silly in a fun way to see what happens when they collide, but some of it is so goofy that it feels like it would’ve been a sequence in Scary Movie 9. I think maybe “Sadako and Kayako” would’ve been a more appropriate title.