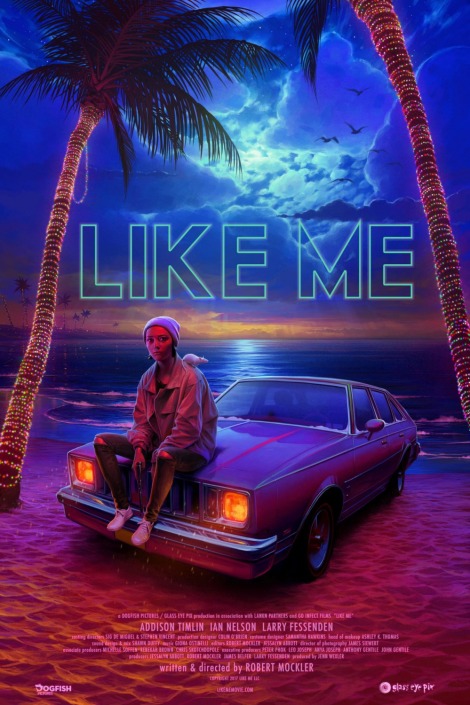 Ever since the days of Friendster (yeah kids, I’m talking FRIENDSTER!), I’ve been fascinated with the way that social media would impact the development of society. In my own personal experiences, I had found people growing narcissistic and would focus far more on how their lives were portrayed on the internet versus focusing on their tangible reality. When I heard the description for Like Me, it sounded right up my alley, but upon actually viewing the film, it was just as shallow as the personalities it was portraying.

The film opens with a convenience store robbery at gunpoint that is documented on a mobile phone, only to have that footage be posted to social media for the robber’s “fans.” The social media phenom, Kiya (Addison Timlin), receives mostly positive feedback from her fans, while others compel her to go further with her antics. Kiya takes the criticism personally, challenging herself to take things to the next level, which cause her to kidnap the older man Marshall (Larry Fessenden) and torture him in a variety of physical and emotional way, broadcasting for all to see. The journey these two take together reveals things about one another they didn’t expect this experiment would, leading them to truths about the human condition. Well, not really though, but the characters seem to think that.

Man oh man, I was so hopeful for this movie! A misled youth who interprets online fame with real-life approval, leading them to do awful things just to gain internet credibility? THAT SOUNDS LIKE A REALITY! Sadly, the film is about as engaging as scrolling through your Tumblr feed. There are visually interesting sequences scattered throughout, but the film doesn’t carry much depth. It doesn’t say anything about society (or its collapse into internet culture) that hasn’t been said before, Like Me just does it with the aesthetics of an Instagram filter. Fessenden is fine as, ya know, someone being tortured, but the detached and “enigmatic” Kiya seemed to lack all humanity, and I don’t mean in the sense that she’s been desensitized to what she’s doing, just that the role could have been played by Siri and bee equally as effective. If you’re looking for something with a handful of interesting and pretty sequences, Like Me might scratch that itch, but if you’re looking for interesting characters or any deeper meaning behind what the obsession with the internet is doing to our civilization, you’d have more luck just watching some Vines. They’re shorter, too!