Also known as Dead Snow here in the states (does that mean the Norwegian way of saying “ow” is “ø”?), this film is about a group of youngsters on Easter vacation who decide to spend their time in a cabin in the middle of a winter wonderland. In case the poster didn’t give it away, it turns out they have stumbled into a winter wünderland! Get it? Because Nazis were German? Glad you’re still here with me. Anyways, the kids are trying to have a grand old time when a mysterious old man stops by their cabin and tells them they are spoiled, their coffee sucks, and that Nazis used to live there 50 years ago. Surprisingly, these Nazis are actually still running around the woods as weird, ambiguous quasi-zombies. I say quasi-zombies because throughout the film, you never really find out if they are zombies or some other type of ghoul, an ambiguity I actually enjoyed. By classifying a movie as a “zombie movie,” someone like me will pick it up and give it a whirl and have certain expectations that are intrinsic to most other films in the subgenre. Dead Snow reminds me more of earlier horror films, like Night of the Living Dead or The Last Man on Earth, where the creatures are just vague monsters, allowing the director to make up whatever rules they want. Multiple characters get bitten, yes, but they don’t survive long enough to find out whether or not they become the living dead. 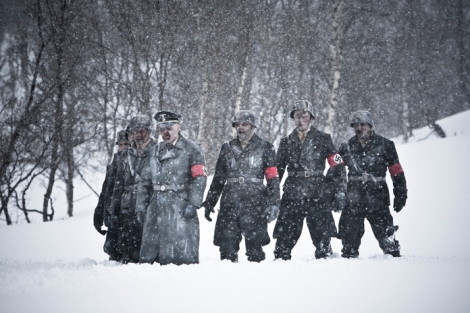 The film could have easily relied on stereotypes when populating the cabin with coeds, but the story showed restraint and the characters were pretty likable (for the most part). I don’t mean you were incredibly invested in whether they lived or died, but you weren’t irritated enough by any of them to hope they’d get killed off. One of the funnier aspects was the character Erlend (played by Jeppe Laursen) who established himself as a movie geek early in the film, making most horror fans nervous that they’re own movie knowledge would be mocked. That wariness subsided in a scene where the group is walks to their cabin and Erlend mentions how many other movies start off that way, which turned into a great opportunity for the writer/director Tommy Wirkola to drop some knowledge on Evil Dead 2, as well as a love connection between two characters thanks to an April Fool’s Day reference. It was nice to see early in the film that horror fans could trust Wirkola, seeing as he used lesser known points of reference. It came as no surprise when Erlend is seen shortly after wearing a t-shirt with the poster for Peter Jackson’s Braindead (a.k.a. Dead Alive), but also secured that Wirkola knew his shit. 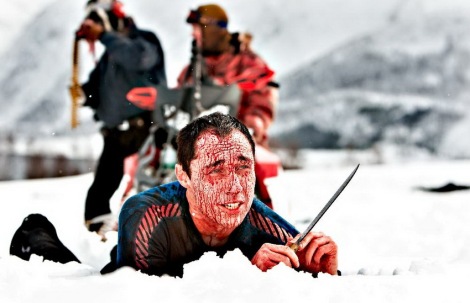 The plot wasn’t all that new or exciting, but the special effects fucking ruled. The filmmakers must have found a great deal on buying fake intestines in bulk, because I can’t remember a movie that had so many scenes involving someone’s entrails being played with. The final battle had all sorts of limb severing, decapitations, and brain pulverizing, creating an orchestra of gore. Add that to a head being ripped into two pieces early on in the movie, and you have yourself quite a gory little film, and you never get sick of seeing that bright white snow get stained by all that blood. All in all, Dead Snow offers a mediocre story but gives you enough blood and humor to keep you interested and thoroughly entertained.