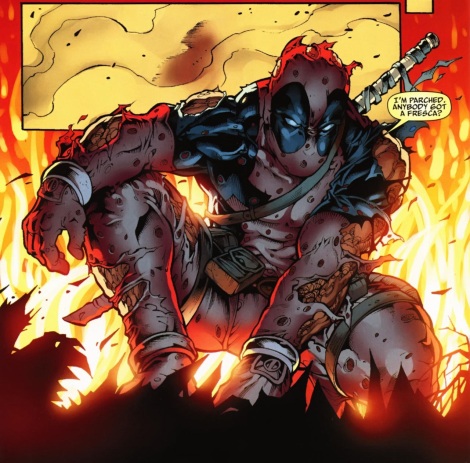 You might not recognize who you’re looking at, but I’m sure the name is certainly familiar. Deadpool is working his way up the ranks from D-list Marvel superhero to C-list, possibly even B-list status. This is mostly thanks to the fact that he was involved in the Wolverine: Origins movie, as well as the fact that he is currently the star of three, about to be four,  titles at your local comic book store. By the time you finish reading this sentence, there will probably be another title. And I’m sure you have been reading the blogs and websites talking about development for the Deadpool movie, starring Ryan Reynolds. With this post, I will give a little background on the character as well as review the three more popular titles that currently have his namesake so that when you finally see a trailer for this movie, you can act like you have been down since the beginning. 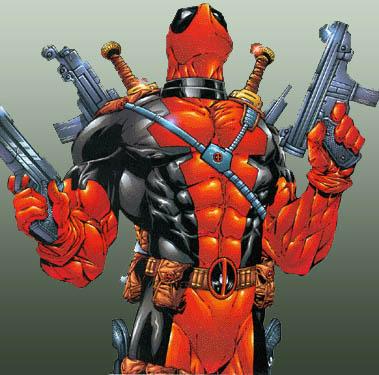 The absolute worst part about Deadpool is the fact that he was created by an absolute idiot named Rob Liefeld, who is absolutely insane. Not so much in any type of cool “Oh my god, look how cool the things are this artist is doing, he must be INSANE!” kinds of way, but in the sense of “Has this man ever seen a human woman, let alone human ANYTHING?’. It’s like Liefeld was sitting around thinking “Hmmm, if only there was a way I could have a character whose super power was the use of guns, samurai swords, and a plethora of pouches! And he should wear black and red, and probably have DEATH or something like that in the name…”. To get a better understanding of the insanity of Rob Liefeld, please consult this website: http://progressiveboink.com/archive/robliefeld.html

That is one shiny sword

ANYWAYS, the simplified backstory involves Deadpool, a.k.a. Wade Wilson, having Cancer and being experimented on with the Weapon X program. Specifically, Wolverine’s healing factor was extracted and applied to Deadpool, which gave him regenerative power, as well as made the Cancer super strong. This means he is powerful enough to grow back limbs or heads, but also covers his body in tumors and makes him horribly disfigured. In an issue of Cable & Deadpool quite a few years back, Deadpool actually described himself as a cross between Ryan Reynolds and a shar pei. In addition to being nearly immortal, he generally relies on his super agility and reflexes, exploiting them as an assassin. One of his nicknames is the “Merc with a Mouth”, Merc being pronounced like mer-k, despite the fact that it is short for mercenary.

And the hilarity ensues…

One of the more interesting aspects to Deadpool’s abilities are the fact that the experiments have driven him absolutely insane. Not Rob Liefeld insane, but the wacky kind of insane, which is probably the reason he has become such a fan favorite. He is constantly making jokes and quips to his counterparts in the comics, and has even taken advantage of the comic book format and their tendencies to have thought bubbles. Deadpool constantly has multiple conversations and arguments between his different personalities, as well talking to the reader of the comic book directly and breaking the fourth wall. To give an idea of his “humor”, it’s like if you were to say Spider-man was Patton Oswalt, Deadpool would be like Zach Galifiankis. Instead of actual jokes, it’s just a constant stream of non-sequiturs.

Merc With A Mouth 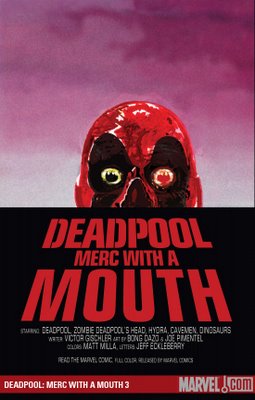 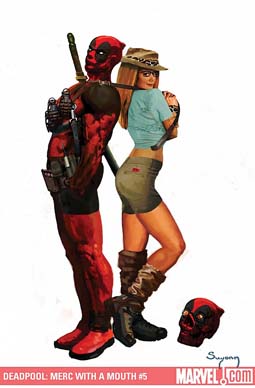 If you were to only read one Deadpool title, I would definitely pick this one up. Before you even open the issues, you would see that all of the covers are parodies of famous movie posters, which make the cover price worth it alone. Once you open up the issue, you get just what you pay for…a wacky mercenary blowing things up and saying insane things, as well as babes with huge boobs in various levels of undress. I believe the current storyline also involves traveling between dimensions with his partner in crime, which happens to be a zombified version of his own head. I would also like to point out that the art is done by a guy named BONG DAZO. That’s right, his name is goddamned BONG DAZO. Now, if that name alone isn’t enough to draw you in, take a look at this: 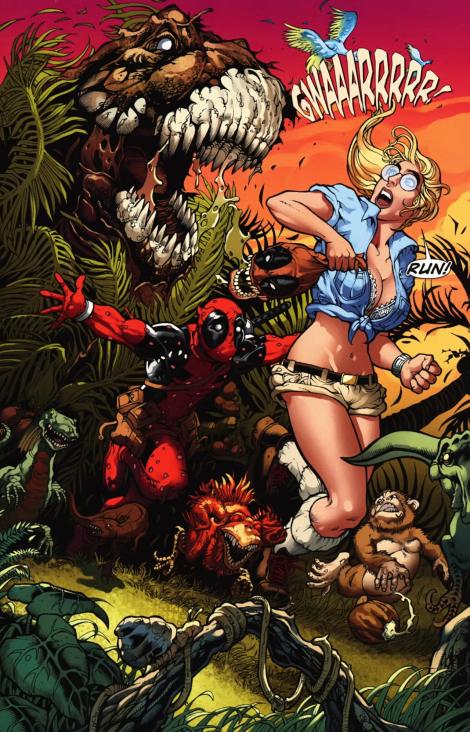 Dinosaurs, zombie heads, and babes. Looks like the inside of my head. 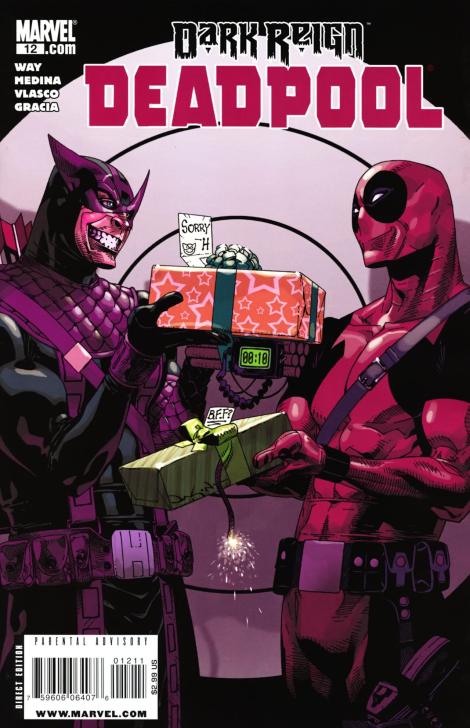 The beginning of this series was pretty good, up until around issue 13. He was doing classic Deadpool stuff, running around, blowing stuff up, saying silly things, and it was a lot of fun when he started getting into fights with Bullseye (who if you remember your Marvel universe, was actually posing as Hawkeye). Once the whole X-Men Utopia event happened, things got a little weird with Deadpool trying to join the X-Men (again), and I don’t really remember where it ended up going, because I was bored with it. However, the last couple issues involved teaming up with Spider-man to take down a mysterious character referred to as Hitman Monkey….who is a hitman, that’s a monkey. Hopefully things pick up and it gets better again. 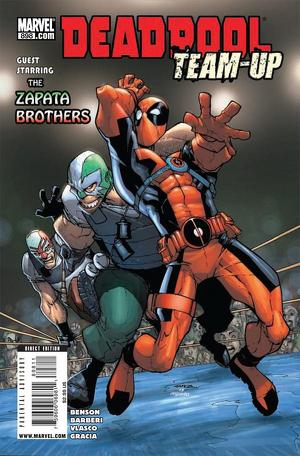 I feel like this series was either a joke or a bet that someone won/lost, thus resulting in a series that is being released in reverse chronological order? Yeah, my thoughts exactly. A few months ago, some flagship Marvel series were reaching pivotal issue numbers, thus causing them to start renumbering their issues. Captain America, Incredible Hulk, and The Amazing Spider-man all hit issue number 600, as well as Daredevil reaching issue 500. Shortly after that, they released Deadpool, issue #900, which I thought was going to be a one shot book poking fun of all those other titles. Little did I know it was a starting point for Deadpool Team-Up to start releasing the following month, starting with issue #899, with numbers decreasing since then. Most of these issues involve Deadpool teaming up with a D-list character to take down some characters you’ve never heard of. Really not worth it, but come on, look how cool that black and red guy with all the guns look!

Find A Shop Near You!