You might also know this movie as Day of the Woman. I would also be willing to accept I Rape On Your Grave, Day of the Rape, I Rape On Your Day of the Rape, or even Rape of the Rape on Your Rape on Rape Day. I think the only reason anyone knows this movie exists is due to the amount of rapes that take place in this movie. The movie is about an hour and forty minutes, but I think if you cut out the scenes where someone is about to get raped, is being raped, or has just gotten raped, it would be all of 15 minutes. 15 crappy minutes, no less. 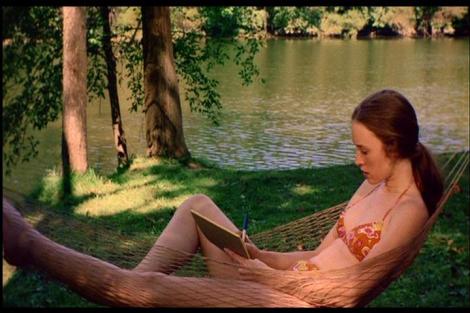 I also get my best writing done while laying in a hammock in a bikini.

The story is about a female writer who is visiting a summer cabin near a lake in a small town. The men who work at the gas station and supermarket take a fancy to her, and when they see her sunbathing on the beach, they rape her. Then, after being physically and sexually abused, she runs into the woods, trying to regain some semblance of her sanity. Sadly, rather than finding sanity, she finds more rapers, and yup, you guessed it, she gets raped by a different member of the group. Severely damaged emotionally and physically, she finally gets back to her cabin later that night, and surprise, the rapers are there! Time for round three! And one guy puts his wiener in her mouth, so I would bring the official rape tally to 3 1/2.

I tried pretty hard to come up with a funny caption, but I mean, honestly, what can be said that is funnier than this guy? AND HE IS ONE OF THE RAPERS!

Considering the mental and physical atrophy this woman experienced, she decides to exact revenge. She first seduces one of the rapers into climbing on top of her in the woods, and she slips a noose around his neck and runs away. The next member of the gang is seduced into sleeping with her and while they are taking a post coital bath, she starts manipulating his bathing suit area, and he gets so distracted that she slices it off with a knife, leaves the room, locks the door, and lets him bleed to death. The last members of the gang are killed by her reckless boat driving, and then the credits roll.

Let this be a lesson, always use the buddy system when attempting to descend stairs naked.

The reason this movie title actually is more popular than the movie itself is the way it dealt with violent rape and the empowerment of women, which are tricky subjects, regardless of what decade it is. I felt the rape scenes to be disturbing because they weren’t exaggerated, they were very realistic. The woman wasn’t completely losing her mind and the characters doing it weren’t monsters, they seemed like real people. There weren’t too many cuts in the way it was edited, so it felt far more like a snuff film. When it comes to the revenge part of the story, I thought it was interesting that, rather than getting increasingly insane and going on a murderous rampage, she actually seems to get a sense of calm in what she is doing. In particular, the castration scene really got to me, other than for the obvious reasons. The way she deceived him, and was even in the process of giving him physical satisfaction, and so quickly went to pain that he couldn’t tell the difference, was extremely brutal. I actually would say I enjoy this movie better than Wes Craven’s The Last House on the Left, which had a similar plot and was made six years prior.