This film marks a highlight in my life. Not really anything related directly to this film, of course, but a personal victory. This film marks the first time Netflix has sent me a Blu-ray disk and the first time I have successfully watched a Blu-ray disk…IN MY OWN HOUSE! Granted, my TV is probably a 25″ tube set, so I couldn’t grasp why Blu-ray is any better, but still. Do I need to capitalize Blu-ray? I really don’t know, but that’s mostly my own fault, for being an idiot. And for also not wanting to look that shit up on Google. Do I capitalize Google? Too late, just did.

You can already tell that these kids are evil, based on their knit caps.

Ah yes, to be in England during the holidays, so eloquent and romantic of an idea, right? DEAD FUCKING WRONG! You are celebrating your Christmas and New Year season with your loved ones, when you notice that your children are starting to misbehave. All kids have their tantrums and little fits, but what if it escalates further than that? Kind of hard to determine whether they are being brats, or actually evil. Well, turns out that they are evil little shits, possibly incorporating voodoo, possibly being hypnotized by some outside force. So we have some death, some violence, some people being impaled on garden tools while rocketing down a sled; all the things that make the Christmas great! Did I just use a semicolon correctly? FUCK IT. 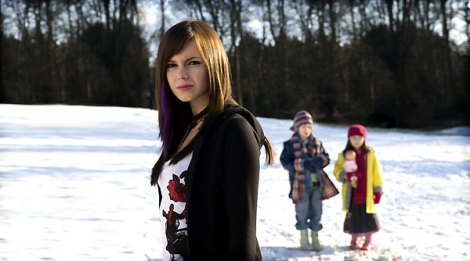 But which ones are evil?! Watch the film to find out! Hint: it’s not the chick with the purple hair.

I was quite surprised by this film, especially after how awful Dance of the Dead was. I set my standards low, and ended up getting a film that was a relatively slow burn, with scenes of violence that took me by surprise, and an actress who looked like a combination of Diora Baird and Rose McGowan…and maybe 10 years younger than either of them. I think the reason I enjoyed this film so much was because of its similarities with Antichrist. Those similarities aren’t obvious, but I saw the premise of Antichrist to be based on the concept that nature is evil, but we choose to assume it as good, with exceptions of evil. The Children seemed to assume that children possess the ability to be evil, but we view tantrums as kids being kids. I’m sure we’ve all been in situations where we see kids throwing tantrums or attempting to hurt their parents, and this film poses the question of whether or not these children know what they are doing, rather than just lashing out. Also, the ending leaves things ambiguous enough that you could see potential sequels, making it just a little bit more than a movie about a group of bad kids. Check it out if you get the chance, ESPECIALLY ON BLU-RAY!