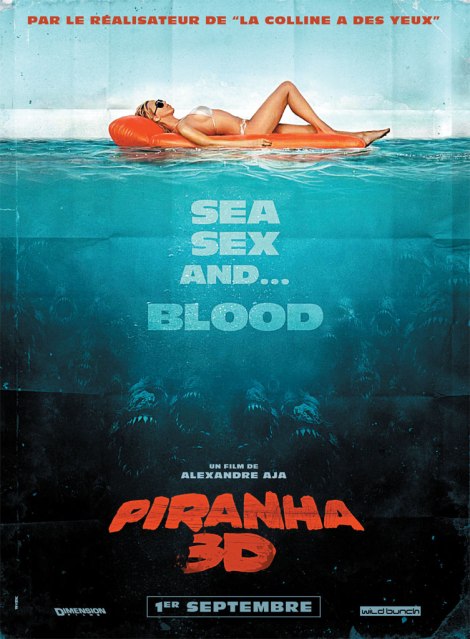 What happens when you take Jaws, make it have sex with Deep Blue Sea, while Snakes on a Plane watches? Yup, you get Piranha 3D. It’s kind of sad that watching people watch the trailer, or watching people look at the poster, they immediately dismiss the film for how awful it’s going to be. These people, who I will refer to as “stupid”, clearly don’t even deserve to enjoy this film in the way it was intended. I honestly had to tone down my excitement before watching it, thinking it could in no way be as awesome as my mind had made it out to be. Luckily, the awesomeness that I could fathom still didn’t hold a candle to the actual experience. 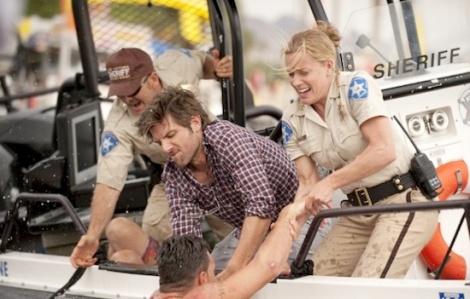 It’s funny how even though Adam Scott only played the character on Party Down, I can’t help but want to say “Are we having fun yet?!” whenever I see him.

It all starts with a man on a boat fishing in a lake in Arizona. We then see a mild earthquake take place, which releases some unknown terror upon him, in the form of small fish with sharp teeth. From there, we are then introduced to characters that we are supposed to care about, but they do their job of stringing together different plot points. It’s spring break on this lake, which means lots of people in the water. When the body of the fisherman is discovered, combined with scientists studying the aftermath of this earthquake, it’s determined that the lake needs to be shut down. Sadly, our spring breakers vehemently oppose this decision, and decide to protest this decision by the sheriff’s department by jumping in the water. Believe it or not, there is then a huge feeding frenzy, with lots of blood and mutilations and everything you expect from a movie entitled “Piranha 3D”. Also, apparently the characters that you were supposed to care about experience trials and tribulations, eventually making their way out of the situation relatively safe. 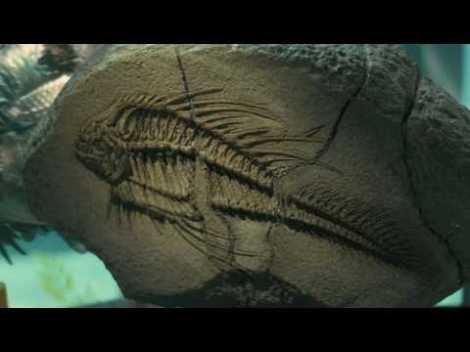 I like to think that maybe Christopher Lloyd brought this piranha fossil from his personal fossil collection.

There’s so much awesome shit to talk about with this film, I don’t even know where to begin. However, the last thing I would want to do is spoil it for anyone, so I will try not to go overboard with details. Let’s talk about the cast first. The main character wasn’t really important, neither was the female he was pining for. His mom, however, was played by Elisabeth Shue, which was awesome. Would I have rather seen Kari Wuhrer? Of course, but Elisabeth Shue did a great job of making you wonder why she wasn’t in more movies, as she played the “firm but fair” action female lead. Who was her partner? MOTHER FUCKING VING RHAMES. What else needs to be said, it’s Ving Rhames. Who plays the scientist? None other than Adam Scott, a.k.a. “Are we having fun yet?!” from Party Down. Glad to see him finally getting some more “leading man” type roles. Jerry O’ Connell is in this, pretty much playing who I assume Jerry O’ Connell is…a guy who loves chicks and partying. What chicks does he surround himself with? Pornstars Riley Steele, Ashlynn Brooke, and Gianna Michaels. Also, British model Kelly Brook, who is not a porn star, but the accent makes up for it. 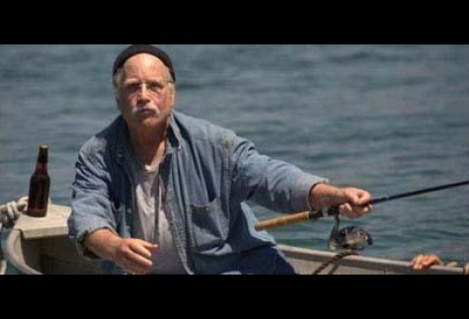 Do you think anyone calls Richard Dreyfuss “The Dreyf”? I don’t, but wish they did.

You’re probably wondering who offers wisdom to our characters in their times of trouble. Well, none other than Christopher Lloyd, playing a crazy scientist who was able to pinpoint the species of piranha, that turns out to be prehistoric. Only drawback to Christopher Lloyd was that he was so awesome, once you saw him, you wanted him to be in every scene, which he wasn’t. Last, but far from least, was the fisherman I was talking about, played by none other than Richard Dreyfuss. Okay, Richard Dreyfuss, why’s that so great? Well, he is wearing pretty much the exact same outfit as he did in Jaws, denim and all. And what do we hear him singing along to on the radio? It just so happens to be “Show Me The Way To Go Home” by Irving King, and yes, that is the song he sang in jaws with Roy Scheider and Robert Shaw. Need more evidence of the details the director, Alexandre Aja went through to properly pay homage? He also named the character “Matt”, which just so happens to also be the name of his character in Jaws. This is all within the first five minutes, mind you, so if you don’t realize then and there what you’re in for, you might as well walk out of the theater. 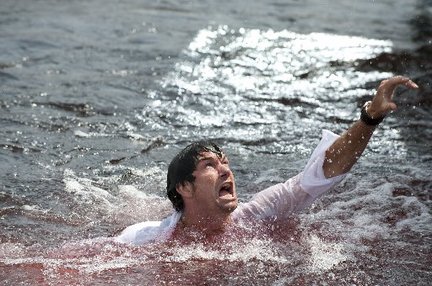 Here we see Jerry O’ Connell, reaching out in hopes of someone saving his career.

Let’s get back to the whole Jaws/Deep Blue Sea/Snakes on a Plane reference I made earlier. In addition to the Richard Dreyfuss involvement, we can take a look at the plot for Jaws similarities. There is a vacation hot spot that is a big money-maker for a small town, that has warning signs of nature fighting back. The sheriff realizes that the lake needs to be shut down, but no one listens to her. They even incorporated the “Jaws Shot”, which is when the camera physically moves closer, while zooming out, which was used in Jaws when Roy Scheider is sitting on the beach and notices a panic in the water. However, the far-fetched plot is more in the style of Deep Blue Sea, about sharks that are made smarter and then go on a rampage. This film gives you the silly premise, but backs up the idea of prehistoric fish living in a secluded cavern, so you can take the concept at least somewhat seriously using quasi-science. And finally, there are touches of Snakes on a Plane, where the horror or drama or suspense is just so ridiculous, you can’t help but laugh, as the filmmakers obviously knew how wacky they were being. 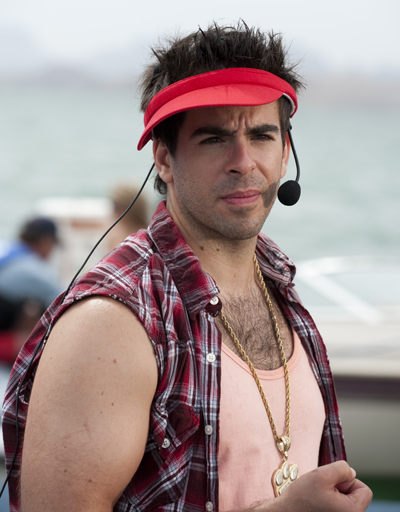 Here we see Eli Roth, looking like he is about to perform the hit song “Yvan eht Nion” with the Party Posse.

And the gore in this film? GOOD GOD ALMIGHTY. You would think there are only so many ways you could kill someone using piranhas, and you would be wrong on that one. DEAD WRONG. Okay, maybe not too wrong, but there is also a wild frenzy that incorporates motorboat propellers and things like that. One scene alone had a woman getting her hair caught in a propeller, which struggled to start, but when it did start, it ripped her face off of her head. HER FUCKING FACE GOT RIPPED OFF OF HER HEAD, PEOPLE. Not to mention how many times people got chewed down to the bone, without dying. Remember that episode of Mr. Show with Bob and David where there was a heavy metal fan who tried to kill himself by jumping into a vat of acid? Imagine that, but with more money, and happening more often. I swear, some of the scenes in this movie made Saving Private Ryan look like Bridget Jones Diary: The Edge of Reason. They even ripped off Ghost Ship by slicing a woman in half with a cable, and the top half of her sliding from her body. Slight difference though, was that in this movie, she was topless. Which brings up another good point…boobs. You see so fucking many, you almost get sick of them. Keep in mind I said “almost” get sick of them. Basically, if you find yourself saying, “Wow, I haven’t seen boobs recently enough for my liking”, give it about 15 seconds, and all of that will change.

There’s this one great scene where a chick with huge boobs hangs out with another chick with big boobs. A classic in the making!

I do recommend going to see this film in 3D, because they make it a point to utilize that element the way everyone has wanted to do, but hasn’t had the balls to do. The first 3D film was shown at the Astor Theater in New York on June 10, 1915. The first feature-length 3D film in color with stereophonic sound, was House of Wax in 1953. The highest grossing film of all time, Avatar, opened in 2009, and took ten years for James Cameron to develop sophisticated enough equipment for this three-hour long snoozefest. And on August 20, 2010, 95 years of failed 3D technology has finally accomplished what everyone wanted to see, and there is no reason to advance the technology further. You want to see beer spraying from a keg onto you? Check. You want to see someone throw up onto you? Check. You want to see naked babes dance around underwater? Check. You want to see a severed dick get eaten by piranhas in three dimensions? Got it. James Cameron can stop trying. Which is funny, because this film is a remake of a film that James Cameron did the sequel to. Take that, artistic merit and movies full of computer generated blue nudists!

Official Site
IMDb
8 Rules While Watching Piranha 3D – by Paul Scheer, who has a small role 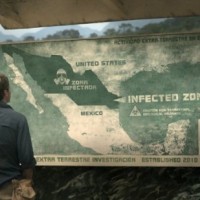