You might be wondering why I am watching this movie a good 20 years after it was originally released, and if you’ll shut up for a second, you’ll find out why. Rampaige and I went to Wizard World Chicago over the weekend, and supposedly Danielle Harris was going to be there. Not really remembering this film, and just kind of remembering her dressed up as a clown in it, I decided to give it another go to refresh myself in case I bumped into her and needed something to talk about. Well, actually, by “bumping into her” I meant I actually tried to search for her, but every time I rounded the corner all I saw was either Ian Ziering or the Iron Shiek, neither of whom would really be impressed with my knowledge of Halloween 4. A few sentences back I mentioned Wizard World, which might have confused some of you, causing a head scratching “Whuh? I thought it was called Chicago Comic Con!”. Having guests like Ian Ziering and Iron Sheik is pretty pathetic, so Wizard World tried to revamp it and change the name, hoping to confuse people into thinking it would have anyone cool. It sucks, because there were some good artists and creators there, that got sucked into the shit storm.

Believe it or not, Michael Myers is still alive! I know, crazy right? And this time he is once again out to get a relative of his, played by an 11-year-old Danielle Harris, whose character is named “Jamie”. It’s weird how they randomly chose that name out of the blue. Anyways, Michael is being transported from one place to another, for some reason, and he escapes. All the while, Jamie is being teased at school for being an orphan, and continually has dreams about her uncle, Michael Myers. Also, it probably sucks because her parents are dead, and she has to live with a foster family. Dr. Loomis is alive, and trying to chase down Michael to prevent more deaths. Sadly, he doesn’t prevent them, and some people get killed, while others live. Michael is eventually shot about a hundred times by the cops, as well as shot at by Loomis, and then Michael falls down a hole. He is left in this hole, because he is obviously dead. Meanwhile, Jamie watches her foster mom get into the bathtub, at which point she grabs a pair of scissors and kills her, and the movie ends with her standing at the top of the stairs, covered in blood, while Loomis cries out “Noooooo!” or “Daaaaaaamn!” or something to that effect.

SHE’S WEARING A CLOWN OUTFIT…LIKE MICHAEL MYERS DOES IN THE FIRST ONE…MINDFREAKED!

When it comes to the Halloween, Friday the 13th, and A Nightmare on Elm Street franchises, I really haven’t seen all that many. Obviously I have seen all the originals, but because there are so many in the series, it’s hard to weed through which ones are worth watching, and which aren’t. This one was actually pretty decent, and I have read that this really got the franchise back on track and popular again, despite the lack of John Carpenter involvement. It was relatively slow-paced, and was more about suspense than it was about gore. Although they did supposedly bring in someone after the film was wrapped and inserted more gore into it to make it more popular, but even considering that, it wasn’t overwhelming. The character of Dr. Loomis could have been written a little bit better, as he came across as having the attitude of “Oh that Michael Myers, up to his old tricks again!”. Also, one of the best scenes involves Jamie’s foster sister and her boyfriend getting locked inside a house, and when he says “Do you have the key?!”, she replies with “I don’t know!”. Not even a NO, but she was just so terrified that she could only respond with “I DON’T KNOW WHAT THE FUCK IS HAPPENING AGGHHGGHG!!!!!”. Maybe it’s just me, but I found that hilarious. 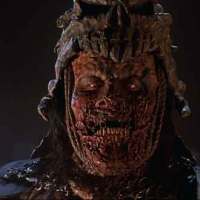