You’ll notice that this film was categorized under Horror Film as well as Non-Horror Film. Tricky, ain’t it? I remember how badly I wanted to see this film back when I saw trailers for it, then when I saw it was coming to video, then it was released, and, well as you can imagine, the desire dwindled for quite some time. I remember seeing the trailers and thinking it was a comedy, hence, Non-Horror Film. However, there wasn’t much funny stuff actually happening, and people were actually being killed in the movie, so, Horror Movie. It ended up being both a horror film and a mockumentary about one of the most famous horror movies of all time, Nosferatu.

“My eyes! The goggles do nothing!” or “Where we’re going, we don’t need roads”?

The year is 1922 and we are in Germany. Scared yet? You should be. F.W. Murnau, played by John Malkovich, is filming his newest masterpiece, but no one involved in the crew really knows what it is. Turns out, it is actually an adaptation of Bram Stoker’s novel Dracula, and Dracula himself is being played by none other than Willem Dafoe. Well, not like a 1922 version, but, the actor playing the actor playing Dracula is Willem Dafoe. And technically, his name is Nosferatu. Confused? Good. The kicker is that this guy actually IS a vampire! Getting a vampire to play a vampire! Genius directing! Some of the crew finds out, some of the crew are killed, the movie gets made, and there really isn’t much more to the plot. I hate to underwhelm you, but, that’s really the gist of it. 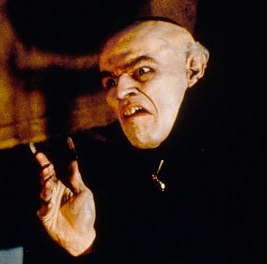 Insert joke about how unattractive Willem Dafoe is.

Despite the plot being lackluster, it doesn’t mean that watching the film isn’t entertaining. Although I categorized it as horror, I was never really scared. Even though “mockumentary” is a style that is generally considered satire, I viewed this as more of a “What if…” type of story. Malkovich was good as the director whose only focus was his film, no matter who was getting hurt because of it. Dafoe, surprisingly, was incredible as Nosferatu, and I’m not really even sure he wore any makeup. It was also mildly nostalgic watching this film, because it brought me back to when I took a course on avant-garde film, and we watched a shit ton of German expressionist films. Now THAT shit is scary. Nosferatu having been a German expressionist film, I think the filmmakers took great care into recreating the type of sets and makeup as closely as possible. To my “trained” eye, they were spot on with the filmmaking process. Makes me want to go back and watch Nosferatu and The Cabinet of Dr. Caligari and The Testament of Dr. Mebusa! FUCK YES TERRIFYING GERMANS!