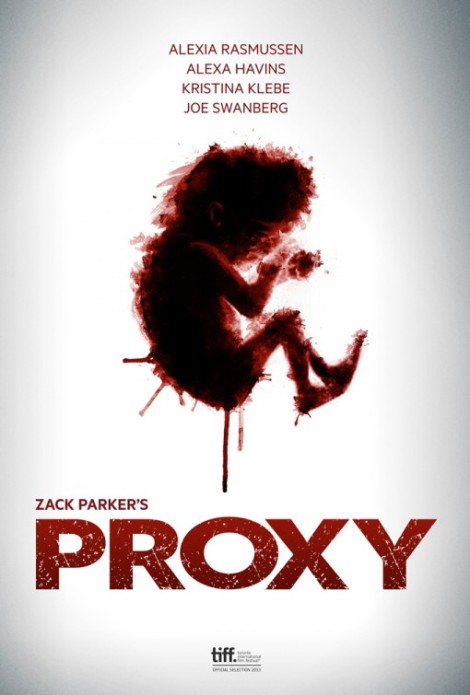 OH FUCK, I’M COVERING FANTASTIC FEST! You might have already known that by following my wildly popular Twitter, but if you weren’t, now you know. There isn’t really one movie or set of movies in particular that I’m specifically looking forward to covering, but rather a shit ton of movies I haven’t really heard much about that I’ll be rolling the dice on. The first movie that I didn’t really know anything about is Proxy, and the reason I watched it was because of my pal Sam tweeting something along the lines of “Proxy was good, had cool wallpaper, and man that @TheWolfman is like so handsome and studly.” Don’t quote me on that, because I can’t exactly remember what he said about the wallpaper. Anyways, I checked it out, and, ya know, here’s that part where I tell you what I thought about it.

The day I post a picture of someone’s blood covered face and don’t make a joke about periods is the day I delete this blog.

After leaving a pregnancy doctor person, or whatever the fuck you call those people, Esther (Alexia Rasmussen) is mugged and violently attacked. When I say violently attacked, I mean that she is laying on the ground and someone takes a brick and REPEATEDLY SMASHES HER IN THE PREGNANT FUCKING STOMACH. Like the brick just fucking bounces all around like her got was a trampoline. Whoa. While trying to deal with her grief and trauma from this event, Esther goes to some group counseling sessions, which is where she meets Melanie (Alexa Havins). Melanie and her husband Patrick (Joe Swanberg) have also lost their child, so Esther and Melanie start developing a friendship. While trying to transition into having some semblance of a normal life, Esther happens to see Melanie in a crowded mall, and let’s just say Esther learns some fucked up stuff about Melanie that makes Esther start to lose her goddamned mind. From here, there’s a lot of crazy shit that happens, and I really don’t want to spoil any of it by giving away the details of the fucked up things some of these characters are capable of doing. Let’s just say there are a lot of people who are dickheads and trauma can make people react in very severe ways.

Cheer up, Joe! You were still awesome in You’re Next!

Even though this movie was billed as a horror film, the tone of the whole thing played out as more of a melodrama, sometimes to the point that I couldn’t help but laugh at how manipulative all of the slow motion shots and music came together. Don’t get me wrong, there were absolutely some horrific elements in it (did I mention the bouncing brick to the gut?) but those segments were few and far between. I’m totally okay with movies that only dabble with elements of horror, I just don’t want any of you guys getting ahead of yourselves and mad at me for calling this a horror film. Even though the cast was pretty solid, I didn’t like seeing Joe Swanberg play a sad guy and I also didn’t like that there were a lot of relatively normal characters being juxtaposed against some extreme ones. In particular, there’s the tattooed lesbian lover of one of the characters that felt like it was a caricature of a “butch”, man-hating lesbian that she felt really out of place. As the plot started coming together towards the end, I was glad to see that there were some details that were left out, leaving the answers in the eyes of the viewers, but I felt there were a few too many that I ultimately really didn’t come to a conclusion as to what had really transpired in the lives of these characters. Most of the time when there is a horror film that leaves out some details or is intentionally vague, there’s some sort of supernatural element to it, but this was much more straightforward and the vagueness of the narrative left me feeling a little underwhelmed. I’d say that Proxy fits somewhere between the melodrama of a movie like The Place Beyond the Pines but with some elements of a film like Red White & Blue with its characters that all hold some level of guilt while being administered a more realistic type of revenge. There’s definitely cool wallpaper though!