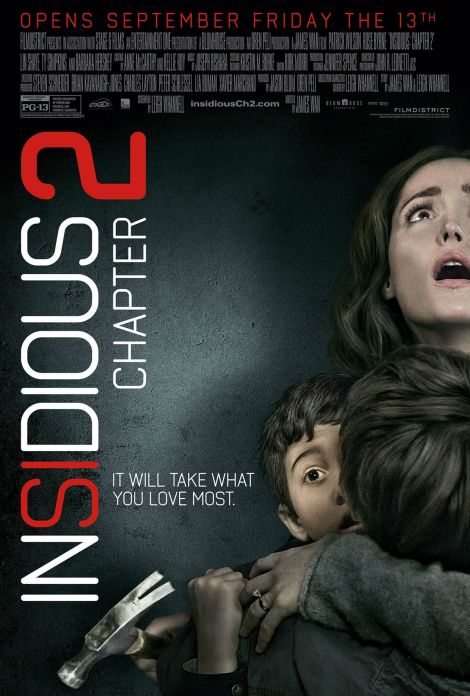 As you’ll be able to see from my review from a few years ago, there were definitely elements that I liked of Insidious, but lots of elements I really didn’t like. If you don’t remember, the first half felt like a traditional ghost story, and it was effective at scaring you, but then the whole tone changed when the investigation team came in and the whole thing got a lot more comedic and we also started shifting dimensions and shit. AND THAT RED-FACED DEMON! Kind of creepy the first time, got less and less creepy any time you saw him after that. Despite not having too strong of feelings towards the first film and my disinterest at this film’s trailer, I actually went into Insidious: Chapter 2 with higher hopes than I should have, and those hopes were met. Granted, one of those hopes was just to be able to see Jocelin Donahue on the big screen, and that happened in the first five seconds, so I probably would have been satiated had I left the film right then and there. In addition to that, this sequel didn’t have to establish any sort of universe or ground rules, as they were probably somewhat familiar to the audience, and was then able to have a lot more fun in that world.

We call this room the “Spooky Dungeons & Dragons Room”.

The film opens with a flashback, showing the main character Josh (Patrick Wilson) as boy a boy dealing with some paranormal investigators, which were events that were only talked about in the first film. After this spooky sequence, we jump back to the events that followed the first film, which involve Josh’s body being taken over by an evil spirit and his family having no idea. While his wife Renai (Rose Byrne) and kids are dealing with supernatural experiences similar to they experienced in the first film, Josh’s mom and the investigators from the first film contact someone who helped Josh get rid of the terrible things he experienced as a kid. After some details emerge as to who the spirit is that might have possessed Josh’s body, it’s up to the investigators and Josh’s family to be able to separate the spirit from him. The only problem is that Josh’s body is deteriorating the longer that the spirit is attached to him, so they’re going to have to put themselves in harm’s way if they want to stand any chance of saving Josh’s soul. In my mind, even if they kill him, he got to marry Rose Byrne so I’d consider that a win in my book. 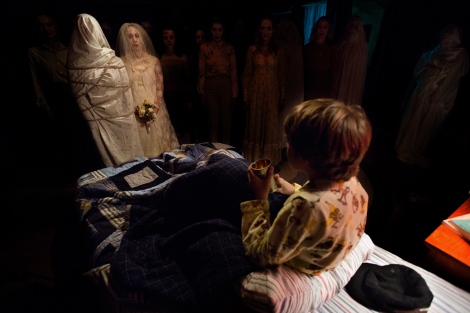 That’s what you get for upgrading your tin can phone to have call waiting.

GUYS. GUYS……THIS ONE WAS SO MUCH BETTER. Remember how I said that the shift in tone of the first movie kind of threw me off? Well this movie already put you in that kind of goofy, over-the-top world that you remembered from the first film and I was definitely able to appreciate it much more. In fact, it almost, ALMOST made me want to go and re-watch the first film to appreciate that humor a lot more after seeing James Wan’s world a little bit more completely. Even though a lot of the scares weren’t as effective for me in this film because of the more comedic tone, I could definitely see the impact and effect they had on the audience, so I’m sure those segments work. One sequence involving a tin can on a string was really creepy, and Wan still managed to change up his scaring style for one sequence involving his baby toys that were used differently than I anticipated. The sequence that really threw me off in the first film was when Lin Shaye’s investigator character was able to contact the spirits through a weird S & M gas mask thing while another investigator wrote down all the things she was seeing, and it was fucking ridiculous. In this film, when an investigator was trying to contact spirits, he used a set of dice that had letters on them that was basically a variation of a Ouija board but it was SO MUCH FUCKING BETTER THAN THAT GODDAMNED GAS MASK. JESUS. Plus that kind of established that there are lots of these different investigators and they all do things just a little bit differently from one another and you could have plenty of chapters of this franchise with all sorts of different investigators using different methods to contact the dead and experiencing all sorts of different evil spirits. The tone of this film felt a lot more similar to something like Drag Me To Hell and all of its effective scares while also not taking itself too seriously, although it’s definitely not as good as Drag Me To Hell. Good job, Mr. Wan! You made a movie that I genuinely like and have no caveats with! I think it was also helpful to have this movie come out so soon after The Conjuring, which had taken itself so seriously, that this film felt all the more fun. There’s also enough of a resolution to the story of Patrick Wilson’s character that I could see more sequels without needing them to be involved. Although, I can’t say I’ll be disappointed if there’s a Chapter 3 and Jocelin Donahue doesn’t get to be in it.