And here we go again, another blast from the past. Well, by past, I mean blast from the 90’s. At the time this movie was filming, it was estimated to have cost somewhere between $120 and $140 million dollars, which would have put it as the highest budget of any film until Titanic, whose budget was $200 million, got released later that year. If it cost that much money, it just has to be good, right?! Well, that’s the tricky part. Wanna know what else was tricky? The fact that Denise Richards was in this movie, and I kept hearing about how she was making some movie where she kissed that girl from Scream and Party of Five and, guess what, THIS WASN’T IT! I was very disappointed that this wasn’t the VHS I should have spent money on to rent on a Friday night.

HOLY SHIT, THIS GIANT FUCKING BUG IS GONNA EAT THE SHIT OUT OF YOU!

This movie was made in the 90’s and was science fiction, so, yup, you guessed it, it takes place in the “not too distant future”, and apparently we are under attack by giant bugs. The technology exists to give people tests that prove which branch of the military they should go into, and three friends find themselves in different areas. One goes to the much higher level of intelligence, one becomes a pilot to transport the kinds of people who the last friend is, the stupid as shit infantry. They promise to be friends forever, but you get the feeling that something might get in the way of that. There are scenes of basic training, scenes of alien bug fighting, and supposedly at the end they mention that they captured a bug that will mean the end of the war. I don’t really want to waste my time with everything in between, but Denise Richards dies and, let me remind you, we do NOT see her naked.

The first time I saw this movie I thought it was fucking terrible. But, since it’s been over ten years since I was disappointed with the realization that this movie wasn’t Wild Things, and since a lot of people talk about this movie being awesome, and since Rampaige was taking too long to get ready, I decided to give this movie another shot. The verdict this time? It was okay. I understand now that it was supposed to be really cheesy and over-the-top, whereas before I thought it was just bad. Now that I have more of an appreciation for films like that, I could enjoy it from a much better perspective. There were guns, explosions, boobs (that weren’t attached to Denise Richards), and violence. When it comes to mindless action, this movie is just as good as most others, but the question is, why the fuck did they spend $140 million on something that was mocking a genre?! I just don’t get it. The CGI was good and all the effects still held up over time, but this film didn’t even make it’s money back. It is generally considered a flop that just happened to get lucky with whatever sort of cult following it has, but still, was it really worth it? 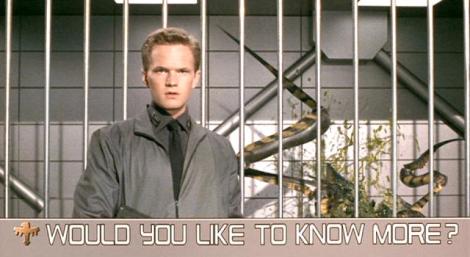 HOLY SHIT NEIL PATRICK HARRIS, OF COURSE I WOULD LIKE TO KNOW MORE! SUCH AS, HOW DO I NET GET THE SHIT EATEN OUT OF ME BY GIANT ALIEN BUGS!?

Something about this film that was mildly interesting was the way it seemed to be aware of itself, mock itself, while also using segments of propaganda in similar ways to how it would have been used during WW2 without it being too confusing. If you were to speak to any of the filmmakers, I don’t think any of them would make claims that this movie stood for something other than what it was, and would deny the existence of any sort of deeper meaning. However, that doesn’t mean that it didn’t successfully try to make the characters, as well as the viewers, just downright fucking hate the bugs. With scenes encouraging children to stomp on every bug they saw, to dissecting young bugs in high school to try to learn their weaknesses, to having characters address the camera/viewer directly, it really made you want to join them in their fight. Lucky for us, we aren’t actually at war with alien bugs, but still. Johnny Rico, played by Casper Van Dien, lets us know that “A citizen accepts personal responsibility for the safety of the body politic, of which he is a member, defending it, if need be, with his life. The civilian does not.” The viewers are all civilians, and this film tries to encourage us to be citizens. Also, the only rule we need to know is “Everyone fights. No one quits. You don’t do your job, I’ll shoot you myself.” The only rule according to Michael Ironside, that is. Sorry, got excited quoting this movie, what was I talking about? Oh yeah, it was an expensive attempt at satire that ended up just having lots of blood, laughable dialogue, and a lack of Denise Richards’ boobs. 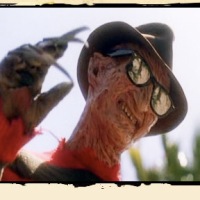