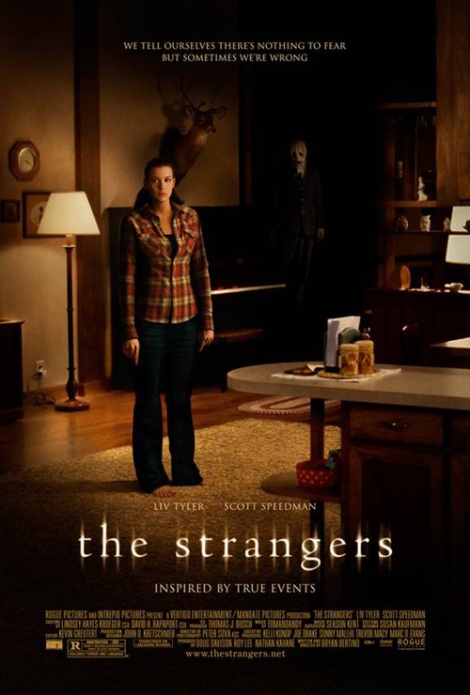 I remember when I first started seeing trailers for this movie and thinking, “Oh great, a contemporary horror film, this is gonna be GREATTTTT,” in a very sarcastic tone. Nothing about the trailer made it stand out, so why even bother? While talking to a coworker about it, he was telling me how similar it was to a French film called “Ils“, which translates to “Them”. Both films are about a couple in a secluded house being tormented by people for unknown reasons, who wear masks, and both films also claim to be based on true events. Albeit they are two different “true” events, but it was hard not to draw comparisons between the two films, especially considering the French film had only be released a year prior. Regardless, both films strike a chord in people in the fact that sometimes the most terrifying things in the world are the things we don’t know and why people might be doing them to us.

All joking aside, the movie does have a cool style to it. I think that might be more of a credit to the fog rather than to the director.

James and Kristen, played by Scott Speedman and Liv Tyler, respectively, are spending the night at a relative’s cabin after a wedding. Also, Scott Speedman is not that guy from Creed, for the record. Anyways, the film starts off really awkward, uncomfortable, and tense, because we learn that James has proposed to Kristen at the wedding and she turned him down. What was supposed to be a romantic celebratory night away from the world is now just a painful reminder of rejection for James. While trying to get in touch with someone to pick him up, there’s a knock on the door. The person at the door asks for someone who doesn’t live there, so James sends her on her way. A little while later, while James is unavailable, there is another knock at the door, and when Kristen answers, it’s virtually the same interaction with the same person. Things are getting fishy! That’s when the poundings on the door get more intense, their car gets smashed, they try to escape, people get hurt, James accidentally shoots his friend in the head, they get tied to a chair and left for dead, and the masked “strangers” leave, with no one knowing who they are or why they have done what they’ve done. 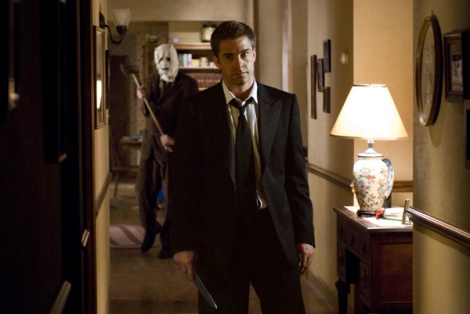 Hey Scott Speedman, relax! That guy just wants to “axe” you a question! Hahahaha! Wait, was that racist?

Well that coworker of mine was right, this film was very similar to Ils, but it had slight differences. At the end of Ils, it turned out to be that the couple were being harassed by a few local kids who were just doing it because it gave them something to do, and those kids were eventually caught in the “true” story. In Strangers, we see the three people unmask themselves to their victims before killing them, although the audience never sees their faces, and they just drive away from the scene of the crimes. But hey guys, guess what? Ya know how I said both of these films were based on true events, and tells the audience that? Well….NEITHER OF THEM WERE. Yeah, that’s right, the filmmakers lied to us, those sons of bitches. Which brings up another difference, that being in how the filmmakers told us these events were real. Ils ends the movie by saying the specifics of what happened when the kids were caught, whereas Strangers opens the movie giving statistics about how many violent crimes take place every year. When you find out that both of these things never happened to anyone, you feel a little cheated that they lied to you, but at least Strangers made things seem a  little more vague, and even though that specific event never happened to anyone, you get the feeling that it could have happened somewhere, and you just never knew about it. Also, the writer/director of Strangers claims that when he was little, someone knocked on his door late at night asking for someone who didn’t live there, and that’s the “true event” that he based this movie on.

Hey Liv Tyler, relax! That girl just wants to axe you–wait, nevermind. She wants to stab the shit out of you.

All lies put aside, I enjoy this film. As mentioned earlier, it really toys with some of people’s worst fears, which are being stalked or harassed by some unknown source for some unknown reason. Even though the director seemed a little douche-y in the behind the scenes features, he did a hell of a good job for his first feature. Specifically I give him credit for how tense he started the movie, with two characters obviously going through an awful time. It wasn’t until this viewing of it that Rampaige asked why the characters were so cranky, and when I explained it was because he proposed to her and she said no, it clicked with her, and it was just a nice change of pace for a horror movie. You felt the tension between the characters so well that even if it wasn’t a horror movie, you were already nervous for what they were going through. So when you first see James leave the cabin and watch Kristen get a glass of water and see a figure in the background wearing a mask that she doesn’t seem to notice, the audience just kind of shits themselves. Everything that happens after that is pretty typical of any other horror movie cat and mouse game, and things got spiced up a bit when James accidentally kills his friend, but the tension that starts this movie is what does it for me. If you watch it and have recently been rejected from a proposal, you might not like this movie as much.