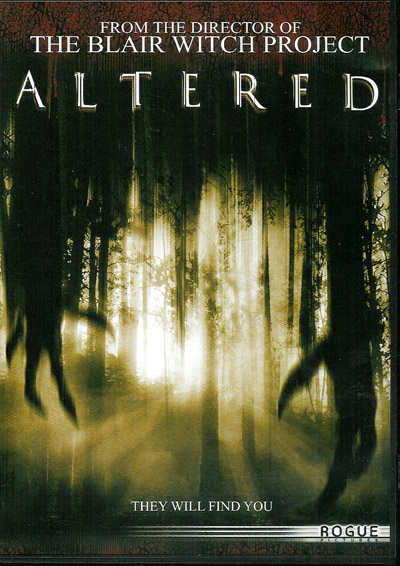 This is the second movie from one of the creators of The Blair Witch Project, which is a movie I think is a lot of fun, but this one was about aliens, which was confusing. I guess aliens are pretty scary though, and I still get kind of creeped out when I watch Signs. Rampaige, on the other hand, still craps her pants to that movie, no matter how many times she watches it. I’m glad this guy waited seven years before making another movie, because had it been any sooner, it probably would have immediately drawn comparisons to his first film, or maybe people would have been more quick to “talk shit” on it. Not to say that this movie doesn’t deserve some level of shit talk, but I think you get what I’m saying. Also, probably the only reason I watched this movie was because it was on Netflix Instant, but I am slowly going through every movie that seems somewhat decent, and feel like I’m really scraping the bottom of the barrel. 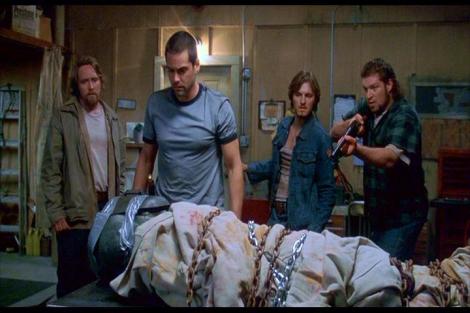 Three hillbillies jump out of a van in the woods with large weapons, presumably hunting something. Once they find what they are hunting, they bring it back to the garage of a friend, but this friend doesn’t seem too happy about it. It’s pretty unclear for awhile what the fuck is happening, but details slowly emerge. These friends have taken this alien hostage, and apparently this alien has the power to control minds if it’s looking at you. Between having their minds controlled, to getting bitten accidentally, to cutting the alien open to dig around in its guts to find a transmitter, lots of crazy things happen. These friends start getting killed by the alien, one by one, because it has escaped in the house, and we then learn that all of these friends have already been abducted by these aliens. Apparently one of their friends was even killed by the aliens, so I guess all these guys were trying to take revenge in whatever way they could. I guess the alien has been transmitting a signal to his alien buddies, so even though the alien that was captured was killed, a whole alien gang shows up at the house. The guy who  lived there, clearly being a psycho, already had his house rigged to blow up. As the aliens are swarming the house, he blows it up, which causes some of the aliens to die, as well as makes the spaceship fly away because it’s too scared or something. Then I guess the remaining friend takes one of the alien bodies and leaves it on the doorstep of his dead friends’ parents house, yet is still unclear on whether or not the whole ordeal is over. 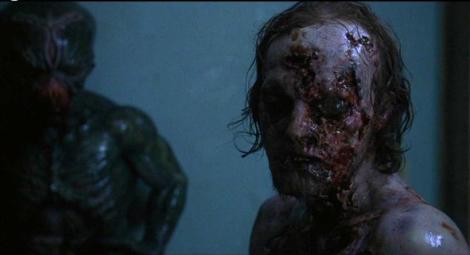 TIME TO WHIP OUT THE PROACTIV, BRO.

What this movie had going for it was the same thing that this movie had going against it, which is the shit that wasn’t explained. Granted, by the end of the movie, you have a somewhat good idea of what had happened, but while I was watching it I was just frustrated. There were a few moments where I honestly thought I had missed the beginning, because how the fuck could you carry on with a movie like this without explaining anything? One part where the alien is laying there and twitching, and one guy immediately thinks “Clearly it’s transmitting a signal to all of its buddies, so I need to cut it open, dig around in its guts so I can find the transmitting device, and then rip it out.” Later on, you find out that the friends have those transmitting device as well, which explains it, but still confusing. Or maybe the fact that one of the friends has mental powers that he can apparently use to battle the alien in some sort of Thunderdome of the brain? The movie was pretty fun, typical monster movie alien stuff, but it just made me frustrated, and the payoff for each one of those frustrations just didn’t really make up for the vagueness of the whole thing.