Oh great, this one takes place in the FUCKING FUTURE. Just what I finally wanted from the Hellraiser movies. We’re on a spaceship and there is a guy controlling a robot who is trying to open the Rubik’s Cube from Hell. He’s interrupted by the space police or something, and then there’s a whole bunch of flashbacks. One flashback shows this guy’s ancestor creating the box for some crazy rich guy in the 17th century, and then there’s a ceremony involving a dead chick’s empty skin? Or something? Adam Scott was in that part, which was pretty cool, but at least we finally learn how this box came into existence. We then cut to a different flashback that is probably taking place where the previous movie ended, with an architect creating a building in the image of the puzzle box. I guess Pinhead is somehow getting involved with everyone in this guy’s, wait for it…BLOODLINE. I think that’s why they named the movie that. Now Pinhead is on the spaceship killing people, but the ancestor who is still alive has turned the spaceship itself into a massive puzzle cube, and tricks Pinhead somehow, and after Pinhead creates a bunch of new Cenobites, gets trapped on the ship as it turns into a cube and Pinhead dies. And I bet this time it’s for good!

If you keep walking around like that, you’re brain’s going to FALL OUT OF YOUR FUCKING HEAD YOU DUMB BITCH.

At least we finally fucking know where this box comes from, ya know? I would say that piece of information bumps up its rating a bit. Granted, this movie is, once again, more of the same shit we’ve already seen. Blood, possession, grotesque demon creatures, typical Hellraiser bullshit. However, once again, it’s not all that bad. The fact that it takes place on a spaceship and in the future is pretty embarrassing, but the segment involving the creation of the puzzle box was kind of cool at least. And we finally have a character that has some sort of concept of what the fuck is going on, rather than a bunch of buffoons just stumbling around the set until Pinhead shows up with all of his leather and ruins everyone’s day. 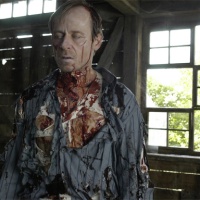 Sounds like Corin Hardy doesn’t want to release his The Crow plans in another medium. Movie or bust!