Here it is, folks, the final installment of the trilogy! This one was a whole three years in the making, instead of, well, one year in the making! I think I mentioned having seen this movie only once, but thinking back on it, I’m pretty sure I saw it twice…in theaters…the same weekend. There wasn’t a lot to do around town, okay?! And would you believe that even after having seen it twice…in theaters…in the same weekend, I still barely remember anything about it? I remember that there was a Creed song on the soundtrack, and I kind of remembered Jenny McCarthy being in it, in addition to Jay and Silent Bob (?), but that’s about it. Well, here we go! The final installment in the franchise that would tie up all loose ends! Let’s get this show on the road! Oh wait, Scream 4 just opened up? Fuck this movie then. 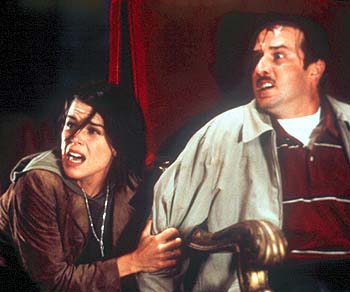 Polo shirts were all the rage back in the year 2000, how could I forget?!

This time, within the first ten minutes of the movie, the character that gets killed is Cotton Weary, so you know shit is serious if you’re killing Liev Schreiber. One difference we learn is that the new killer person has a voice changer that can replicate other people’s voices, rather than that one specific voice that we always heard before. Now the only living characters from previous films are Sidney, Dewey, and Gale, and there are murders taking place on the set of Stab 3. There’s also a scene where Jay and Silent Bob are getting a tour of the studio, and it’s completely arbitrary and stupid and annoying. So there’s a bunch of new characters introduced, and once again, we know that some of these characters will die, and that some new characters will be the ones who are the killer(s). This time, along with all of the murders, there are clues being left that tie back into Sidney’s mom, and the fact that there might be some mystery to her life. Turns out that for a few years, she was an actress, but then she left Hollywood and started a family, which resulted in Sidney. People die, things are awkward with Dewey and Gale, there are lots of moments that are self-reflexive (I find myself using that phrase a lot with this movie) and we learn that, yup, you guessed it, a new character is the killer! I guess that Sidney’s mom had a kid while in Hollywood who was abandoned or something, and that child grew up to be, surprise, THE DIRECTOR OF STAB 3! Except he controlled all these details to make it look like Sidney had carried out all the murders, but, well, that doesn’t matter, because she kills him, and then Dewey proposes to Gale, and then the last shot is a big metaphor where she is about to take a moment to close the gate protecting her house, and instead decides to leave it open. Ya know, because it’s the last moment of the trilogy, and now she is strong and powerful. Bullshit.

I liked watching the patterns with how akward people’s hair/clothes were through all these movies, and being reminded of what used to be popular. Come on, is Courtney Cox wearing a fucking wig?

This one was kind of just a worse version of the previous installment, and it fucking pisses me off. You have three characters, THREE, that have been in previous films, and you pull the bullshit OH YOU HAD A LONG LOST BROTHER bullshit? Are you fucking kidding me? This franchise was known to generally be pretty smart and witty, and with their “final” installment, we need to believe that a brand new character, that’s a long-lost brother, is the final villain? That’s daytime drama shit right there. Not saying that I have all the answers for this franchise and I know what they should have done, but come the fuck on, that’s bush league. Not to mention the fact that so many people were pissed at Jamie Kennedy‘s character getting killed in the previous movie that they included him in this one in the form of a video confession, giving everyone the rules of the trilogy. One of those rules being “Anyone can die, even the main character”, and guess what, NONE OF THE MAIN CHARACTERS DIED. How could you set us up like that and not follow through with it, Jamie? You dick. This is still better than some of the other slashers that are out there, but it was a shitty way to “end” a franchise that had started off so strong.