Finally done with the series! Fuck yes! I know that I mentioned a few weeks ago that this was one of the movies I was interested in seeing, but had I not watched the trilogy recently, I probably would have skipped this one. I knew that Kristen Bell would be in it, but I also knew that she got killed the opening, so I had mixed feelings on it. And knowing that this movie was filmed while David Arquette and Courtney Cox were getting divorced made things kind of awkward to watch as well, but I guess I was willing to put up with it, since that girl from Hotel for Dogs was in it. Rampaige claims that Kristen Bell was walking on our street the other day, and as much as I want to believe her, I think it is all just a cruel trick to get me to kill myself. Also, this review will have spoilers abound, since I didn’t leave anything out of my other reviews, so why should this one be any different? Let this be ample warning that I am going to give away the ending, and if you have a problem with that, then stop reading now.

Two girls are being tormented by phone calls, and get murdered. Then the title “Stab 6” appears on the screen, and we see two new girls watching this movie. Those two girls were Anna Paquin and Kristen Bell, who start arguing about the direction the series is heading and how all this “meta shit” is getting out of hand. Kristen Bell gets pissed and kills Anna Paquin, and then the title for Stab 7 appears on the screen, and we see two new girls watching the TV. Confused yet? Well, I fucking was. These girls get killed as well, and finally the title of “Scream 4” appears on the screen. I didn’t want to believe it just yet, but, it seemed as though the fucking movie was finally starting. Sidney Prescott is back in Woodsboro to promote her book about her life story, and her agent is played by none other than Community‘s Alison Brie. Deputy Dewey is now the sheriff of Woodsboro, and him and Gale have a quaint, possibly disappointing life. As far as other new characters, there is Dewey’s new deputy, played my Marley Shelton, Sidney’s cousin Jill, Hayden Penetiere plays the horror film loving friend of Jill named Kirby, and the two Jamie Kennedy characters of the horror film loving dorks, played by Erik Knudsen, who was in Scott Pilgrim, and Rory Culkin, whose brother Keiran was also in Scott Pilgrim. Jesus, how many fucking Culkins are there? 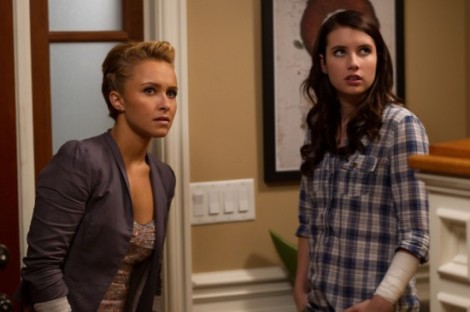 You know she’s young because of her hip haircut. Ya know, not the fact that she looks like a 12 year old.

After the deaths of the first two girls, the killer seems to split his attention between Sidney and her cousin, as well as her cousin’s friends, among the other high schoolers. There is a marathon of all the Stab movies that Gale tries to plant hidden cameras in, but she gets caught and gets stabbed. I can’t remember when it happened, but Alison Brie got killed too. Womp womp. There was also one of those scenes explaining the rules of horror movies, but this time, rather than saying this is another sequel, redirect the focus of the rules to remakes, despite Scream 4 not being a remake. Either way, people get killed and tortured and yelled at, typical bullshit, and then we find out who the real killers are. Ready? Alright, well, the real killers are the Culkin kid, the reason being that he was trying to remake the original Woodsboro murders but is actually filming all the murders, and also Sidney’s cousin Jill, claiming that the difficulty of growing up in a family with Sidney meant Jill never got any attention. Jill stabs the Culkin so that she will remain the only survivor, and then Jill stabs Sidney, leaving her for dead. There was then a kind of awesome scene where Jill scratches herself, rips out her hair, smashes herself into a picture frame, stabs herself, and throws herself into a glass table, leaving herself for “dead”. She gets taken to the hospital, only to learn that Sidney also survived, and then there is a showdown between Jill, Sidney, Dewey, Gale, and Dewey’s new deputy, that ends with Jill getting her brains electrocuted by one of those doctor electricity machines. THE FUCKING END.

HELP, COME QUICK, WE NEED TO CRAM MORE PEOPLE INTO THIS REACTION SHOT!

I walked out of this movie satisfied, as I certainly enjoyed it. Easily the most entertaining of all the sequels, and it almost makes me think the other two sequels were even worse than I initially remembered. I understand that the other two films kind of needed to exist to help build the mythos of the franchise, but they were so terrible in comparison to this one. I almost considered giving this film as high of a rating as the original movie, except for the fact that they wasted FIFTEEN FUCKING YEARS TO MAKE THIS MOVIE. Seriously? You waited this long, to a point where virtually nobody cared whether you made another one, to actually make a good one? This one had a much more fitting end to the series than the previous film did, and that was supposed to be the end. I guess that’s what happens when you get Wes Craven and Kevin Williamson involved with the series again. 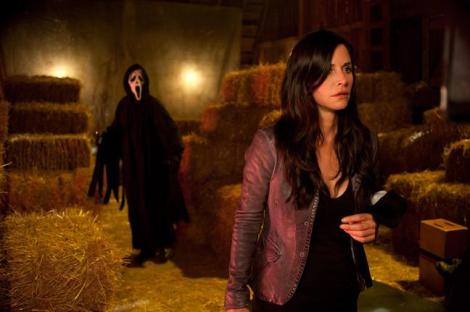 She really just looks like she’s stumbled into the haunted hayride I used to work at circa 2001.

I listed all those new characters earlier in the post because another problem with the whole franchise is that the killer or killers always are people who are brand new to the story, so it makes narrowing down the killers much easier. Someone asked me if I had anticipated it being the people who ultimately did it, and of course I did, because they were both new characters, so I suspected all of them. Granted, I didn’t quite anticipate Sidney’s cousin, but since she was new, I wasn’t too surprised. There were a few scenes and moments that were recreations of scenes from the first film, which were kind of neat, especially when Hayden Penetiere had to answer a bunch of horror movie questions, and when asked something about remakes, went on to list every single horror remake of the past 20 years, and holy shit, there were a lot of them. Also at the marathon of the Stab movies you saw the credits that showed that the original Stab film was directed by Robert Rodriguez, which is twice as funny considering he actually DID direct that footage. Ultimately I’d say this movie was fun and satisfying, but hopefully they don’t accept the positive response to make them think they should make another one.