How fucking awesome is Crank? The only reason I went to see Crank in the first place was because I needed something to do to kill time, and it was free. Little did I know that going to see Crank with Lazer and Mark Teffer would change my life forever. I made everyone I know see this movie because it was so goddamned insane that we needed to confirm with other people that it actually existed and it wasn’t a group hallucination. As if Crank wasn’t insane enough, when I went to see Shoot ‘Em Up, I realized it was possible to out-Crank the original Crank. It was like a cartoon that came to life, with more blood and Monica Belucci. Thinking it couldn’t be topped, you can imagine the challenge faced by creating Crank 2: High Voltage. Despite not necessarily topping Shoot ‘Em Up, it brought back the original Jason Statham insanity that we all knew and loved. Considering I don’t really like Nicolas Cage, I wasn’t going to see Drive Angry, despite it being in line with that “so insane that it’s incredibly entertaining” kind of vibe. It wasn’t until my brother called me and threatened the life of Beardy Joe that, to save my friend’s life, I made it an effort to bump this movie to the top of my queue, and here we go! 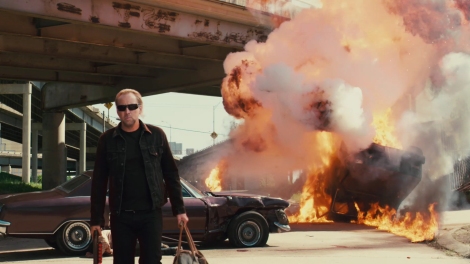 Smart thinking, John Milton! Always walk AWAY from an explosion, not towards. Now THAT’S using your noggin!

The film opens with some weird kind of animation involving a car and the voice of William Fichtner saying something about people escaping prison because of their badass-ery. We then get to see Nicolas Cage driving a car and attacking some assholes, blowing one’s hand off and blowing another’s leg off in order to get information on the whereabouts of some baby. He walks away from an explosion, and I realize that this movie would have been more worth seeing in theaters than at home and in 2D. Nicolas Cage plays John Milton, which fucking confused me because that’s the guy who wrote Paradise Lost, and he has a shitty mullet and weird blonde streaks. He meets Amber Heard‘s character, who I recognized from being in Pineapple Express. William Fichtner plays the “Accountant”, who is obviously some sort of demon guy after John Milton, who has escaped from Hell. I guess Milton and Amber Heard’s character are after Milton’s baby granddaughter because she is going to be used in a sacrifice to bring Hell to Earth. There’s shitty dialogue, gunfights, boobs, and Tom Atkins guest-starring as a sheriff who wears a t-shirt that has a bunch of movie spoilers on it. Eventually, Milton succeeds in saving the baby, so the Accountant takes him back to Hell. The end.

I’m no director or anything, but I think you guys could look angrier.

Sorry guys, but that isn’t anywhere near my Crank standards. Actually, to be honest, it might be near my Crank standards, except this came out five years too late. The scene my brother tried to sell me was a scene where Nic Cage is having sex with a lady while he is fully clothed, and when his clothing is questioned, he says he never disrobes before a gunfight, only to have a bunch of guys break in and have a sex gunfight take place. Most of it was in slow-motion, and most of the kills involved something flying at the camera, which might have been impressive to see in 3D. However, I couldn’t help but be reminded of a similar sex gunfight which took place in Shoot ‘Em Up, four years ago, and with two people who you WANTED to see have sex. Wait, did I just admit that I wanted to see Clive Owen have sex? Whoops! The point is, I’d seen it before, and seeing it again wasn’t too captivating. It probably had the same amount of insanity as Crank, in quantity, maybe not quality, but as I mentioned, it comes five years too late. I also fell asleep for probably a good 20 minutes of the movie, but I didn’t give a shit about going back and re-watching it. I suppose the supernatural element of the whole thing was mildly entertaining or at least gave it a slightly different spin, but not enough to ever want to watch this again.

Leave a Reply to Men on Film Cancel reply

These are all the games I have acquired in the last year and have yet to play because I have no friends so I’d appreciate some of you moving to/visiting Seattle so I can crack ‘em open!
Color Out of Space (2020) Lovecraft doesn’t often translate well into live action, but Richard Stanley has proven he’s more than up to the task. Full of ethereal gloom and grotesque monsters, the film takes a familiar isolationist horror story and manages to make it feel entirely unique. Cage’s unhinged performance is totally earned and required by the story, proving he and Stanley have what it takes to adapt the seemingly unadaptable. Full review in bio. -🌖-
Very happy this #Zombieland candle smells like Twinkies and not rotting flesh. @zombieland Double Tap is out now on Blu-ray, DVD, and Digital from @sonypictures.