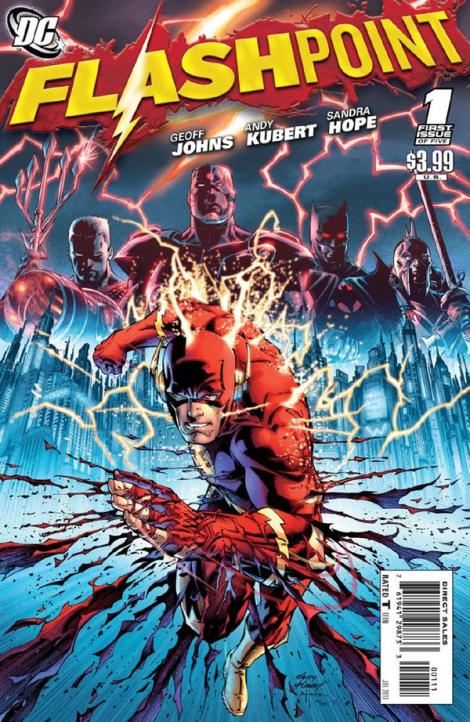 You fucking got me, okay!? I can admit that DC tricked me into reading this series. I tried to avoid reading it because I don’t have very good luck reading the DC events. My most recent experiences were with Blackest Night, which I enjoyed, but both Final Crisis and Brightest day just confused the shit out of me. I guess that’s the issue I have with DC events, which is that I’m just not familiar with enough characters that when one of them pops up, I know nothing about them. My recent confusions are what made me blow off Flashpoint, but it was also because I wasn’t reading much about The Flash and didn’t want to be more confused. The reason I decided to read it was because of how annoyed I was trying to figure out what had happened the day after it had been released, that I figured I’d say “fuck it”, read it, and see how confused I got. So here we go, filled with spoilers, is what happened in Flashpoint. As a warning, I’m going to skip some details for the sake of brevity.

I think this image is somehow important, but I can’t really keep track of what’s going on. Other than The Flash is running, of course. And he’s running F-A-S-T.

Barry Allen, who some might know as The Flash, wakes up at his desk at the police station. When he tries to use his super power, he falls down the stairs and sees his mom looking at him. Flash Fact: Barry Allen’s mom is dead. Clearly something wacky is going on, so Barry goes after Batman, the best detective ever. When confronting Batman, we learn that Batman is not Bruce Wayne, but is instead Thomas Wayne. Clearly there is something wacky going on in this universe, and it seems that Barry Allen is the only one who knows it. I know that Barry’s mom being alive and Bruce Wayne being killed instead of Thomas might not seem like some big issue with this universe, but I should also mention that in this universe Wonder Woman and Aquaman are about to tear the world apart in a big death war fight thing. After Barry gets his powers back through lightning, he decides that he needs to find Superman, only to learn that Superman is locked in some basement and has never seen the Sun. In addition to being on the brink of war, all of Barry’s memories are changing to fit this new universe and he realizes that to correct things, he’s going to act quickly. When Barry determines that Reverse Flash is to blame and confronting him, Thomas Wayne kills him in order to have Barry run back in time to set things right. Thomas is critically wounded, but gives Barry a letter to deliver to Bruce, and then Barry says his goodbyes to his mom before running back in time to correct the universe. After setting things back to being more similar to what they are and delivering the letter to Bruce Wayne, Bruce starts crying over what his father said, and thus ends the DC universe.

As far as five issues miniseries go, I was quite entertained. The whole story was relatively condensed to just a few characters, with Flash and Batman being at the center. I’d like to point out that I didn’t read any of the one-shots of tie-ins for other characters, so I’m sure there’s a lot more stuff that happened while Flash was running around, but the story itself was pretty easy to understand. Maybe because I only read those few issues of the series itself I missed out on the sense of how widespread or “epic” these events were, they seemed a little underwhelming. I understand the idea of Barry going back in time to change one event and how that will resonate throughout history and change lots of things in all sorts of different ways, but it didn’t sink in that the DC universe was hitting the “RESET” button. It was somewhat melodramatic seeing Bruce Wayne cry, but I understood why his entire character would end right after that event happened. I’ve also already read the first issue of the new universe, Justice League #1, and enjoyed it, but I’m still confused. I guess after all of the marketing around the end of this series, I expected something a little more, either with a longer series or maybe more emphasis on the whole world changing. After I read the final page and it said “The End” on the bottom, it was hard to believe that they meant the end of the entire DC universe. I can understand fans that are upset over this series, but I feel like any fans of Flash or Batman can appreciate the series, and would even recommend it to anyone looking for a prelude to any of the new number ones.