I remember really wanting to see this movie when it was in theaters, but fucked up and never did. I don’t really remember anything from the trailer, but it had Harry Potter in it and was about ghosts, so that’s probably why I was excited. Once released, I didn’t hear much positive feedback from people leaving the theater and nobody that I talked to really seemed to enjoy it. I knew that CBS was in some part responsible for this movie being made, and previously they had released dogshit like Extraordinary Measures, The Back-up Plan, and Beastly, which gave me more reasons to be hesitant. This means I waited four months to watch it in the comfort of my own living room, and since this review will contain spoilers, the non-spoiler review was that you should check this movie out if you like ghost stories that rely heavily on mood and atmosphere. 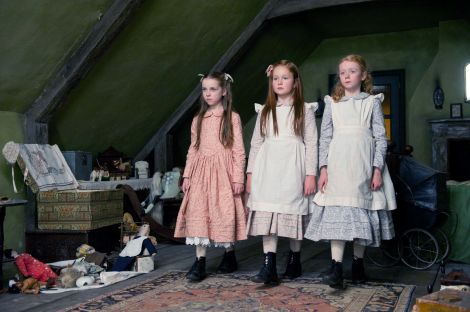 Mathematically, this is creepier than The Shining by at least one little girl. That’s just math, people.

The film opens with three little girls putting down their toys, looking over their shoulders, and then jumping out the window to their deaths. Cool! We then meet Arthur Kipps, played by Daniel Radcliffe, who is about to leave his small boy to go to a remote estate to sort through paperwork so the house can be sold. This is all Victorian era England, by the way, so everyone is wearing classy outfits. When he arrives at the small town where the house is, we start getting the feeling that something strange is going on, as people seem quite wary of Kipps and don’t seem happy that he’s getting involved in the house, only accessible at certain times of day due to the tide. He starts seeing strange things at this house, mostly involving a woman dressed in black. THE NAME OF THE MOVIE IS A SPOILER ITSELF! After returning to town and reporting these events to the local constable, a small girl enters the police station and dies in Kipps’s arms because she had swallowed lye at her house. Would you believe people blame Arthur for this? HE DIDN’T SHOVE THAT SHIT IN HER DUMB THROAT!

When Arthur goes back to the house, he starts uncovering the details of its former occupants. The couple who lived there had adopted the sister’s child, under the assumption the sister would be able to see him. The couple refused, causing very angry letters to the couple. The child died in the marsh that led up to the house, and the boy’s birth mother was not at all happy about this and swore she would never, ever forgive them for letting him die. She later killed herself in that very house, and ever since then, people have been seeing this woman wearing black. Kipps starts seeing more and more spirits, and someone in town tells him that anyone who sees the woman in black results in small children dying, supposedly as payback for the woman in black’s child dying. Nervous about his own son who is coming to visit, Arthur manages to find the body of the boy, which had gone unrecovered in the marsh, and brings him into the house to reunite him with the woman in black. She appears, sees the boy, and Arthur buries the boy with his mother, feeling a sense of relief that he has calmed her restless spirit. He goes to pick up his son at the train station, and while Arthur is distracted, his son starts walking into the path of the train. Arthur dives after him as the train comes, and we then see Arthur clutching his son safely next to the tracks. Arthur looks up and sees the train station is now empty, but his son sees a woman and asks his dad who it is. We see that it is Arthur’s wife, who had died giving birth to their son, and we are reminded of the letters from the woman in black that say she will “never, EVER forgive” anyone for what had happened. The woman in black appears one last time to the audience, she makes eye contact with the camera, screams, and the credits roll.

What were all of you stupid babies crying about?! I felt that this movie had anything that a classic ghost/haunted house story needed. Rather than doing research to find out what people didn’t really like about it, I’m going to wait for someone to comment about what their gripes were. I guess I can understand people being upset with the main character dying and nothing being resolved, but that was something I quite liked about it. It reminded me of Drag Me To Hell in that way, and really appreciated the way that it made the idea of a sequel seem pretty ridiculous. Having a completely contained story with a satisfying “surprise” ending also reminded me of some other favorite ghost stories of mine, which are The Orphanage and The Others. One thing I thought was weird about the trailer was that it looked like it gave away one of the jump scares, and I wondered why they would do that. After watching it, I don’t think they cared about giving away ONE jump scare, because there were probably as many as fifteen. I think that had they cut that number by at least half, each one would have had much more of an impact, rather than knowing the movie wouldn’t go 7 minutes without something loud happening. Something that Rampaige mentioned was that she’s glad Daniel Radcliffe didn’t really look like Harry Potter so I don’t think he’ll be stuck portraying that character forever, and I agree with her. He’s pretty cool. I haven’t seen the original version of The Woman in Black, so maybe the complaints had something to do with this not being as good as the original, but I doubt that. If you prefer your ghost movies a little slower and want them to remind you of stories you’d tell at a campfire, then definitely check out this solid addition to the Hammer Films.

UPDATE: After writing this review, I noticed that someone posted something about Daniel Radcliffe having a cameo in the sequel to this movie. There goes my whole “Nice, complete story that didn’t require a sequel” idea. DAMMIT.