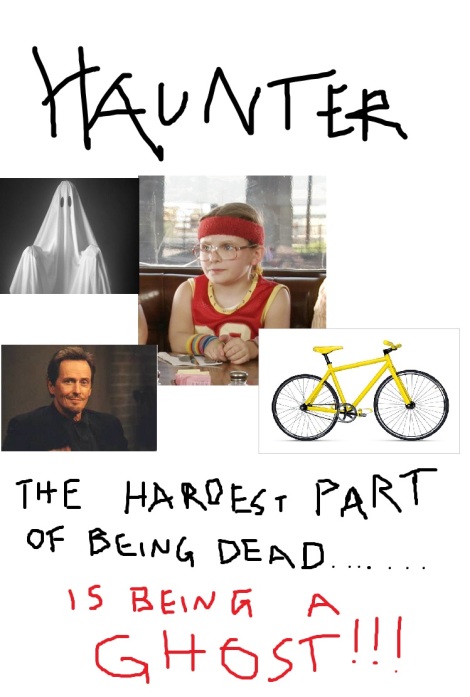 This is it, ladies and gentlemen. Haunter is the last film of SXSW ’13 for me to review! Don’t worry, there’s still a bunch of other shit to look forward to, but this is the last horror film I saw at the festival so obviously it’s the last one I’ll review. The night that this movie was premiering at the festival, I opted out of seeing it to check out Calvin Lee Reeder’s The Rambler instead. The reactions I read on the internet the next day weren’t all that positive, so I felt pretty good about my decision. The more screenings that happened, the more middling to bad reviews there were for it, and I think the closest thing to a positive review I heard of the film was that “it could’ve been good.” With that being the most positive thing said about Haunter, I figured I could skip it without missing out on too much. I also knew that, prior to this film, director Vincenzo Natali had made Cube and Splice, neither of which I was really all that impressed by. However, with it being my last night at SXSW and it being my last opportunity to visit an Alamo Drafthouse for a while, I figured that even if the movie was awful, I’d at least get to drink a pretty awesome milkshake. Looking back, yes, the only positive thing from my experience of seeing Haunter was drinking a milkshake. If you don’t like spoilers, don’t read this review, because trying to make sense of what I saw required trying to figure out the plot and I’m inviting you along on this journey!

The day before her 16th birthday, Lisa (Abigail Breslin) feels as though she’s experienced all of this stuff before. She can predict what her parents are going to say and how they’re going to react, and when she wakes up the next day, she goes through everything again. Lisa and her family are ghosts. Dead ass ghosts. This means that they’re caught in some sort of loop, but Lisa is the only one who recognizes it. As she tries to explore her house for any way to escape, following noises and shadows, her family is visited by “The Pale Man” (Stephen McHattie) who tells her to cut the shit. If she doesn’t stop fucking around, then the fate of her and her family will be even WORSE than just living the same day over and over for eternity. Do you think some pale dude is going to stop Lisa? HELL NO. The more she explores the house, the more clues she uncovers about other girls who have died there, and she starts realizing that The Pale Man is the one responsible for all of their deaths. Apparently this pale gentleman killed his family in the late 1800’s, and everyone who has moved into the house has had The Pale Man possess the father figure and would kill everyone else in the family. Lisa has found that by touching things that used to belong to the dead girl’s will break them out of their cycles so they can all fight The Pale Man, which they do, and this results in Lisa breaking her cycle and finally getting that bike she wanted for her birthday. Don’t worry, they aren’t brought back to life, they’re all still dead ass ghosts. This movie wouldn’t do something crazy like that!

WHAT A STINKER. I’d say that the first five minutes of the film had me intrigued and the whole concept of ghosts realizing they’re ghosts is interesting to me, but everything after the first five minutes was boring and stupid and dumb. Was this movie supposed to be scary? Was breaking the cycle of being a ghost somehow supposed to coincide with what it’s like to become a woman? Why were there so many butterflies in the film’s opening sequence? Why did the entire movie look like it was stuck on the motion correction setting on an HDTV? Why did the effects of the ending flashback look like it was done with After Effects? Why wasn’t the entire film just Stephen McHattie running around like a weirdo? OH MY GOD WHY DID EVERYTHING HAPPEN THE WAY IT HAPPENED? DAMMIT. Guys, I don’t know, maybe teenage girls will connect with this movie somehow, in some way, but it really wasn’t for me, nor was it for anyone else who I talked to who had seen it. The movie took place in the 80’s so it was funny to see Lisa wearing a Siouxsie and the Banshees shirt with Bauhaus and Morrissey posters all over her wall, but that’s about it. The whole thing just felt like a different spin on what The Lovely Bones also failed to do in its exploration of a dead person coming to terms with being dead, but at least The Lovely Bones looked good at parts. This was just really dull and uninspired. It just….I don’t know, how do you convert a fart sound into my moon scale?