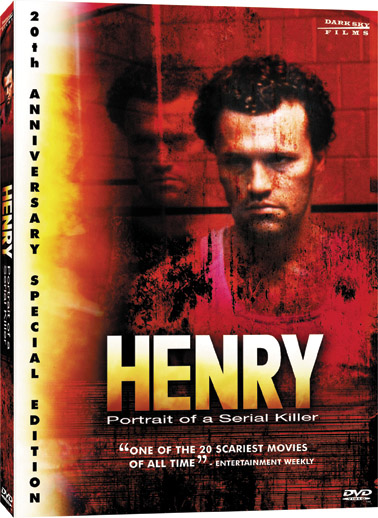 When it comes to judging any piece of art, whether it be film or music or photography or whatever, it’s really hard to judge that work fairly outside of context of when it was made. For example, when most people discuss The Beatles, they talk about them in context of when they came out and who they influenced. All that matters to me is that as of 2010, I don’t really like them. Whereas a film like Star Wars, no matter when it was made, whether it’s 1977 or 2007, is still the best thing ever. I feel as though this film falls into this former category, that whenever it’s discussed or examined, it is tied into the time period it was made, and all the way it influenced other films. I had seen this movie before and it didn’t do much for me, so I decided to give it another go and wanted to discuss it completely oblivious to the time period it was made, except when time relates to the film.

The more difficult to watch scenes are due to Michael Rooker having his shirt off.

The plot is pretty minimal, which I think is what makes this film really cool. Most horror movies, let alone any genre of movie, has a pretty standard introduction, which leads to a plot point that hooks you, followed by the rising actions which culminate in the climax, and then ends with the resolution. I felt that Henry broke that tradition with enough subtlety that it really works for it. We are introduced to three characters, Becky and Otis (played by Tracy Arnold and Tom Towles respectively) who play a brother and sister with a fucked up relationship, and also Henry, played by Michael Rooker, who is obviously deranged. For the record, Michael Rooker is pretty insane, so the fact that he plays the title character should come as no surprise. I feel like every movie this guy is in should be followed by the title “portrait of a serial killer”. Whether he’s in JFK: Portrait of a Serial Killer, Slither: Portrait of a Serial Killer, or Mallrats: Portrait of a Serial killer, the guy is bonkers. The three characters develop a pretty dysfunctional family, whether it’s looked at as a mother and two sons, a married couple and their cranky son, the roles they play in this family are constantly flip flopping, so you never really know who to support.

This new family has some sort of normalcy to it, which is Becky. She really has no idea what the boys are up to, she is just a girl with a crush on Henry, who is hit on by her older brother, and all she wants is a job. And what the guys are up to is where the film gets its name. They are drifting through their lives, killing people out of what seems to be boredom. They aren’t setting a pattern of robbing people they murder or taking out vengeance, just when they feel like killing, they kill. I should also point out that the movies opening scenes has multiple dead bodies that somewhat allude to the fact that Henry killed them, with no mention of when he did this, how long he’s been doing this, and if it took place before or after the events in the film. So it’s a little confusing when all of a sudden both male characters are insane killers. The turning point in this film is when they need to buy a new TV and are mocked by the person they try to buy the TV, who they kill and steal a video camera from as well. This is something that I feel was very disturbing to audiences in 1986, because everyone was using this technology only for filming their kids birthdays or what have you, and to imagine there were psychos out there keeping a record of their murderous spree, people must have been quite uneasy. However, in 2010, the advancement of technology and mass media results in the fact that if a celebrity farts, there was someone there to videotape it and put it on YouTube within 30 seconds. Everybody knows there are atrocities being committed across the planet, and most likely they are being filmed. We really just hope that we don’t accidentally stumble across this footage.

With a shave that close, Henry should be a barber!

After the video camera discovery, there is more murder and good times had, and the relationship develops between Henry and Becky. Surprisingly, this causes Otis to get upset. He gets so jealous eventually, that Otis rapes Becky, with Henry walking in, so Otis tries to kill Henry. Becky intervenes and stabs Otis in the eye with a comb, and this causes him to die, apparently. Then Henry chops up the body into pieces and the happy couple hit the road. The movie ends with Henry dropping off a bag of luggage on the side of the road which we assume has the remains of Otis inside. The reason I think this film did/does stick with people is due to the fact that there is no resolution. We have no idea what happens to the two characters after the events of the film. Henry might have stopped his rampage after finding someone to love, she could have joined in, they could have gotten caught, they could have gotten away. The idea that you might walk down the street and look at Henry the wrong way and you could be the next victim is what stays with people. 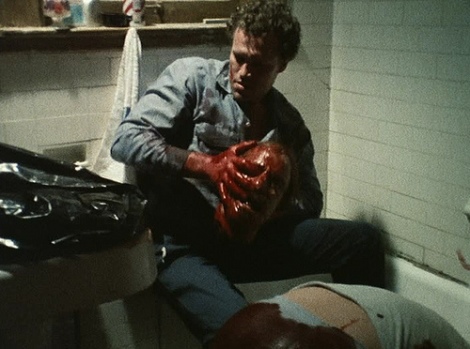 Talk about getting a head up on the competition! Hey oh!

Since I mentioned the importance of time for works of art, I would like to point out two examples of this film putting a date on itself that doesn’t make it as terrifying in present day. One example is just the location of the film, which is 1980’s Chicago. This place looked like a shithole. It came as no surprise that if Henry went into the right warehouse in the right (or wrong, depending on how you look at it) part of town, you could buy stolen TV’s. One scene in particular took place downtown under one of the most famous streets in Chicago, but Henry and Otis get away with shooting someone and driving off. In this day and age of cell phones and GPS and things of that nature, it would seem that in a city this large, you are relatively more safe than in 1986, as well as less trusting of strangers. I know that if I saw someone having car trouble on Lower Wacker Drive, I wouldn’t stop and help, despite the fact that The Dark Knight was filmed there. The second example is when Henry and Otis are discussing ways to avoid getting caught, and Henry talks about how they should try and vary their methods of murder to avoid being caught. If they shoot everyone with the same gun, it will all tie back to them. Whereas if they strangle someone, stab someone else, choke someone else, the police wouldn’t be able to tie all the murders back to them, as if it’s really that simple. There are currently multiple TV shows all about the different ways to catch murderers using the smallest amount of evidence possible, so the fact that you could avoid police interference just by varying killing style would work seems hard to believe in today’s world. But there is absolutely no presence in this film of police or any authority figures trying to catch Henry, and in the film’s setting, it’s easy to imagine that the police have better things to do. I think that were I to review this movie in 1986 I would be giving it a higher rating, but who wants to live in the past?