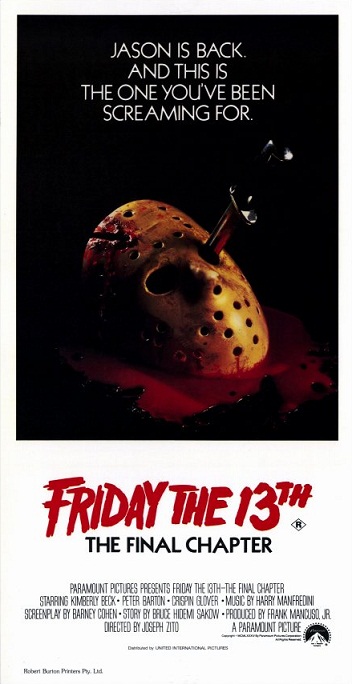 The first time I saw this movie was at the Music Box Massacre back in 2008 and the director, Joseph Zito, was there to do a Q & A. I don’t really remember much of what was asked of him, or how he responded, except there was one thing he said that I will always remember about this movie. See that part where it says “Final Chapter”? Yeah, well, the filmmakers actually thought they were serious. This film was made at a time where there was a decline in the interest of the franchise, so they decided to give it one last shot, and were presumptuous enough to call it “The Final Chapter“. Guess what?! They were wrong…DEAD WRONG. 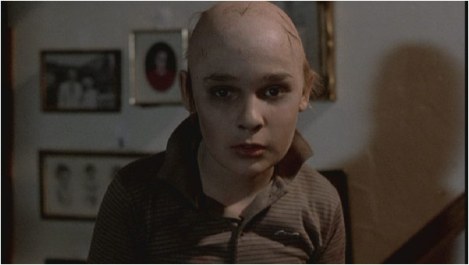 You look like shit! However, I think Corey Haim is looking worse right about now…

A group of teens are going to a cabin in the woods near the former Camp Crystal Lake…but these aren’t just your average teens! Well, for the most part they are, except one of those teens is played by Crispin Glover. Right there you already have a head start on the rest of the franchise, considering this is the only film that Crispin Glover was in. These teens meet a family who lives nearby, and there’s a little kid in that family, played by a pre-teen Corey Feldman. Two points to Joseph Zito for his casting! Then Jason shows up and acts like a dickhead and starts killing the shit out of everyone. He makes his way through the teens and is now attacking the family, and then Corey Feldman has a great idea on how to get through to Jason! Right when his sister is being attacked by Jason, Corey runs upstairs and gives himself a really shitty haircut! I mean, it’s terrible. He then runs down and is just all “HEY JASON LOOK AT ME…MY HAIRCUT IS SHITTY…JUST LIKE YOUR HAIRCUT USED TO BE”…and Jason totally falls for it. The sister machetes him and then hugs Corey. Then Corey smashes the machete into his head, and when Jason falls down on top of it, it drives the machete COMPLETELY through his head, and Corey continues to smash his head, and is just going crazy. We next see brother and sister in a hospital, and when they hug, you see a crazy look in Corey’s eyes, like he is going to turn into Jason. Oh no! 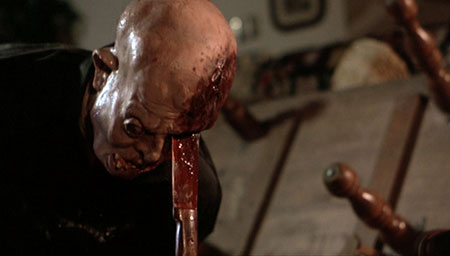 RIGHT TO THE FUCKING FACE!

This movie as a whole isn’t really all that exciting or new, but it’s really a few particular moments and scenes that redeem the whole thing. That scene where Corey Feldman cuts his hair to look shitty? Not even the weirdest thing that happens! No, the weirdest thing that happens is a dance sequence involving Crispin Glover. A lady he is trying to bone comments on the music being danceable, and he certainly proves her the fuck wrong! His arms and legs start going all crazy, and then it made a boner in my pants. As if that didn’t bump it up a rating on the moon scale, then the craziness with Jason’s death certainly didn’t hurt. Add in the special effects of Tom Savini and this movie is (severed) head and shoulders above most of the following sequels.

Just two best friends who always get along
Make ‘em all shorter!
Pretty happy with my big boy Easter outfit! (In 2.39 in honor of @deancundey_asc)
Happy birthday to these two best friends! Mara is 13 and Eleven is 4!!!