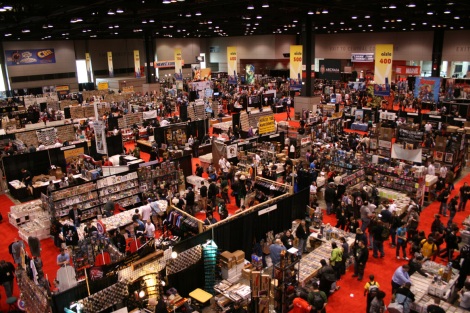 What a weekend! Big difference between this year and last year? This year I wasn’t alone! Whoa! Friday I brought a friend from work who is just getting back into comics and Saturday and Sunday was joined by my brother, who has the disadvantage of not having a comic book store near him. This provided a great opportunity for him to not only buy a bunch, but to also be really confused during panels and have no idea what was being talked about. I don’t really remember how I discussed C2E2 last year, and I know I could click my previous posts and find out, but instead of doing that, I’ll just talk about what happened, and randomly toss in some pictures.

I saw a woman walking by holding Tom Servo and I asked for a picture of him. I was honored to have her ask if I wanted a picture of me HOLDING Tom Servo, and sure enough, here he is. He touched my dick.

I got there on Friday pretty much as soon as it was open to the public. It was in the same convention center this year, but was in a smaller part. The drawback to this was that there wasn’t quite as much room to walk around as there was last year. This might have been due to the fact that this year was also a lot more popular, but either way, it was more difficult to navigate. The biggest things I made sure to locate were where Marvel was, where DC was, and where Dark Horse was. I also made sure to find the comic shops I visit, so that when I got bored, I could stop by and shoot the shit and see if I was missing anything.

I figured that I harassed Agent M, a.k.a. Ryan Penagos, of Marvel through Twitter, that the least I could do was say hi to him. We decided to let the palms of our hands do that talking, and the conversation sounded something like “SLAP”.

Another difference between this year and last year was that there weren’t quite as many panels this year that I was looking forward to, as well as not as many entertainment guests. The part about the guests isn’t necessarily a bad thing, but there were less times where I would go over just to see what a person looked like standing in front of me as opposed to on TV or in movies. The first panel wasn’t until later in the afternoon and was about Green Lantern. It was kind of, well, not too exciting. Not sure if this is because I’m not as familiar with their continuity, their panel not being too exciting, or the fans being disinterested, but we only stayed about 20 minutes. We then went to the Nerd City panel, mostly because I knew they’d be drunk. I wasn’t sure what was talked about, but there was yelling and cursing, and, yes, they were drunk. After that I went to an X-Men panel, and once again, being a few months behind in their story was a little confusing, so I called it a night and headed back home.

Being the big brother that he is, after I said, “I WANT THE SHIELD”, he made sure to grab it, and not let me have it. Fun fact: This picture was taken by Marvel editor Tom Brennan. It made me feel like Steve Wacker to boss Brennan around, despite not making him cry.

What I was most excited for on Saturday was the chance to meet Danny McBride, who had only been announced a few days prior and was only supposed to sign for an hour. We stopped by the booth he was signing at, Dark Horse, an hour ahead of time to ask when the line was starting. Turns out you needed to pick up some secret ticket, which resulted in not meeting him, and having to settle for seeing him sit there signing stuff. The next thing on our agenda was to watch a real Quidditch match, and by real, I mean people throwing dodgeballs through hoops while running with brooms between their legs. Then it was time for the Avengers panel, which had Brian Michael Bendis, C.B. Cebulski, and Matt Fraction. Highly entertaining and relatively informative, but mostly entertaining. Then it was time for the Ghost Hunters panel, so it was another opportunity to see Steve Gonsalves answer questions, this time with Dustin Pari. After 20 minutes of hearing all the same questions asked as last year we decided to get in line for the Cup O’ Joe panel, and it was a good thing we did. Probably the most packed panel, but luckily we were there early to get good seats. This panel was Joe Quesada, C.B. Cebulski, Jeph Loeb, Brian Michael Bendis, and Matt Fraction. It was awesome to just see these guys shoot the shit with their fans, no matter how genuine or cringe-worthy the questions were. 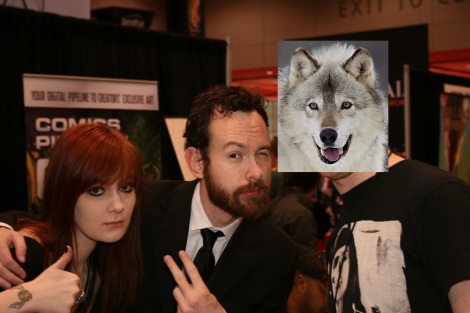 I attempted to compliment Ben Templesmith by claiming that even after wearing a suit for multiple days, getting it all shitty and disgusting, would be nicer than my clothes. The results of complimenting his wardrobe ended up sounding something like: “Can I have your used, shitty, soiled clothing?”. He still allowed me to take a picture with him and Molly McIsaac.

It was announced on Twitter that there was a surprise Garth Ennis signing on Sunday, so we made sure to get there really early, since we had missed out on Danny McBride the day before. I was going to have him sign the first issue of The Boys, but luckily my brother was in search of something, and we were both able to get single issues of Preacher for him to sign, and we were on our way five minutes after the signing had started. We mostly meandered around the show floor for another hour or so, just double checking to see if there was anything we missed. Rampaige was coming to meet us to take our passes, since she wanted to try to meet Steve Gonsalves. Once we left, I got text messages from her about him being there, walking by, her crying, and then she stopped responding. However, she did tweet about meeting him, just didn’t have enough time to talk to me, other than to get picked up.

Believe it or not, Rampaige started the conversation by saying, “My boyfriend got your autograph for me last year…” Rookie mistake, Rampaige, rookie mistake.

Despite not getting to see Patton Oswalt do standup, and not meeting Danny McBride, I’d say it was another successful year. My favorite part about any convention is just seeing so many people who are so incredibly passionate about anything, no matter what it is. Obviously with comic books, you’re going to get a lot of people interested in “nerd culture”, but with an event like this, there are just so many different aspects. From comic books to videogames to Dr. Who to anime to paranormal investigation. It reminds you that no matter how weird or dorky you are for liking those things, there are tons of other people out there who like all of that stuff, and might even be dorkier than you, which ends up making everyone feel a little bit more comfortable with how you’ve decided to spend so much of your time and money. Enough of the touchy feely stuff though, as I’ve got some movie to get back to watching, but as a friendly reminder, if anyone ever wants to talk about comics at any time of day on any day of the week, make sure you get in touch.

The closest I got to getting a picture with Matt Fraction, far right, was getting a picture of him in a panel with C. B. Cebulski, Jeph Loeb, and Brian Michael Bendis. Not much of an accomplishment? Well, he also happened to be the only one in the photo not tweeting. But his tweets all weekend were hilarious anyways.