Ben Affleck, that guy from Mad Men, Massachusetts, and Hawkeye?! What’s not to like! Even though I had never seen the movie, I bought it for a yankee swap with my family this past Christmas, because with a combination like that, how could you not be interested? And I know what you’re thinking, and no, it’s not a sequel to The Village, sadly, which will hopefully be made any day now. Let me clarify that this movie is about Charlestown, which is a neighborhood in Boston, MA. It’s kind of confusing trying to figure out bullshit between neighborhoods and actual cities in Boston, the same way it makes no sense in Chicago either. Why won’t they let me be in charge of this shit?! Also, my research suggests that this was based on some book called “Prince of Thieves“. If you say so!

Ben Affleck and Hawkeye, a.k.a. Jeremy Renner, are bank robbers in Charlestown, and to establish that, we see them robbing a bank. They interact with this one lady to get her to open the safe, played by Rebecca Hall, and end up taking her captive to buy themselves some leverage. They release her a little while later, but it’s long enough that she is visibly unsettled, and has a hard time cooperating with the FBI guy, played by Jon Hamm, and she is all sad and stuff. Affleck wants to make sure that lady doesn’t give away too much, so essentially stalks her, but turns on the Affleck charm, and they start a relationship. Obviously this bums out Hawkeye, and Jon Hamm doesn’t know about it, but it’s awkward for all parties involved. The guy who has been setting up these heists, played by the late, great Pete Postlethwaite, learns of this relationship, and threatens everybody into performing one last job, worth three million dollars, to rob Fenway Park. Everybody agrees to it, but it doesn’t pan out that well. Hawkeye ends up getting killed during the heist, and Affleck escapes. When contacting that girl he was all sexy with, he sees that the FBI is there to meet him, so he buries some money for her and moves down to Florida. She uses the money to build a community ice rink, and Ben Affleck grows a beard. I don’t think Jon Hamm was happy at the end.

One of the biggest strengths about this movie was that it really was about the “town”, as opposed to being too much about any one character. Obviously it was about all of these characters, with Ben Affleck being the focus, but the story felt driven by the setting rather than by the characters. The love story wasn’t too over-the-top, and at the end, he didn’t really end up with the girl. You didn’t necessarily feel bad for Affleck’s character, and he obviously was entertaining and charismatic, but you knew he was an asshole. Jon Hamm got some of what he wanted, because at least he killed Hawkeye, which was someone he had been after for a while. Hawkeye got the shitty end of the stick, but that was his fault. I also found the heist scenes to be entertaining, because despite my descriptions, there were heists involving trickery and deceit to get the money. They seemed just clever enough that I knew I wouldn’t have thought of it, but these people weren’t supercriminals or anything like that. Definitely recommend it, but considering the original cut was 4 hours, then 2 hours and 50 minutes, it definitely felt like it was missing a little bit of heart. 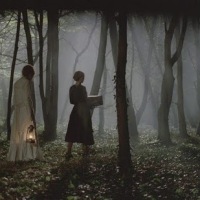