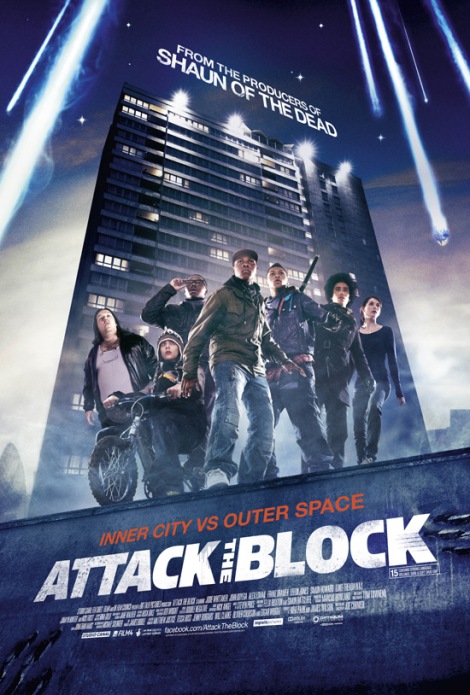 I only had a small chunk of time to watch this movie, and unfortunately, I think I missed it completely. What the fuck am I talking about? Well, hold on a second and I’ll tell you, you asshole. What I meant to say was that I heard about this movie back in the spring, heard that it was produced by Edgar Wright, was sci-fi action horror comedy, and that it was getting good reviews. From there, I determined this would be a film I would like to see. I tried to track it down in a few ways, and kept hearing more and more positive things, until it was eventually released in a theater nearby. I watched the trailer and wasn’t too impressed, but I had heard so many good things, I figured I’d give it a shot. A combination of circumstances prevented me from catching the theatrical release, and I just kept hearing more and more about how good it was. Not wanting my opinion to be biased by all the positive hype it was getting, I tried to ignore it completely. When it was finally released on Blu-ray, it was a long wait on Netflix, but clearly it got to me eventually. As much as I wished I could view it on its own, oblivious to all other people’s opinions, I think I needed to wait a few more years to judge it on its own merit.

That guy in front is named “Moses”, and despite the religious implications, he is still a street thug who mugs people and deals drugs. So very, very likable.

I think that in the UK teenage punks who commit petty crimes are referred to as “hoods”. If anyone can confirm that, I would appreciate it, but even if they aren’t referred to as that in the UK, I’m going to refer to them as “hoods” in this review. Anyways, the film opens with a group of hoods mugging a woman, only to be interrupted by a car being hit by something falling from the sky. When the hoods investigate what it is, it turns out to be some creature that kind of looks like Mousers from the Teenage Mutant Ninja Turtles, except covered in fur and with bigger teeth. They bring the dead creature to their drug dealer, who it is assumed is who these hoods answer to. In the meantime, more and more of these impacts from the sky are noticed by people through the neighborhood, causing a little bit of worry amongst this gang. More and more aliens are on the loose, and they are getting bigger and bigger. For this group of hoods, it seems almost like the aliens are targeting them, which might just be because their neighborhood (or “block”, for the purposes of this film) is the only place they’re concerned with. It’s when these hoods go into a room where a shit ton of weed is being grown thanks to giant UV lamps that it is reveled that one of the hoods is covered in something, presumably something he got covered with while killing the first creature. When this hood realizes he’s the one that caused of all this to happen, he takes it upon himself to give detailed instructions on how to create an explosion, using himself as bait, to much success. When all the creatures are dead, the police take him away because he is still wanted for being a little asshole thief drug dealer.

This reminds me of the place where I used to play lazer tag. You saw all the shit in someone’s teeth and all the sperm on their clothes. Or you could see the shit on someone’s clothes and the sperm in their teeth.

Stupid goddamn hype machine! I went into this movie thinking it would be the greatest fucking thing I had ever seen, so obviously I was upset over the fact that no, it was NOT the greatest fucking thing I had ever seen. Do you remember way back up at the top where I said that I thought this was going to be a sci-fi action horror comedy? Well, it was some of that, but not quite all of it. It was definitely a sci-fi action movie, but to say it should ever be categorized as “horror” or “comedy” wouldn’t be correct. Of course, there are quite a few comedic elements, but aren’t there a lot of action movies with comedic moments? Same thing with the horror aspect, that it wasn’t too scary as you were waiting for the creatures to attack, but there were a few thrills and a few gruesome shots. Regardless of all this genre talk, I think the thing that prevented me from enjoying this movie too much was that I didn’t like any of the characters. I’m sure some people will argue that my summary of what happens is a little too simplified, but that’s pretty much the gist of it. It’s a group of punk kids who think they are badass for mugging a woman, and I’m supposed to give a shit that when THEY kill an alien, the aliens fight back? Or that the woman they originally mugged gets involved with the hoods and they say things like, “If we had known you lived here, we wouldn’t have mugged you,” like it makes up for anything? No, they were little punks and sure, they saved some people’s lives by the end of the movie, but I’m not mad that the cops took them away at the end.

Once I overcame the fact that I didn’t really like any of the characters, except for the one played by Nick Frost, and got over the fact that this was neither all that horrific or all that comedic, I started to enjoy it a lot more. I think what I enjoyed most about this movie was just the overall visual style that director Joe Cornish used. One thing of note was the creatures themselves, which despite my comedic description, were actually pretty fear-inducing. This is mostly credited to their teeth, which seemed to glow a weird neon turquoise, and those teeth were just fucking giant. Even though the creatures themselves were a very dark black or were hiding in the dark, seeing nothing of them other than giant fucking glowing teeth was pretty cool. Cornish was also able to use an in-plot device to get some pretty cool shots. I can’t quite remember why everyone was shooting fireworks throughout the whole movie, but they were, which meant that some of the hoods had plenty of fireworks that they used to startle the aliens. This led to some pretty cool shots involving fireworks and the smoke created by those fireworks, and you can imagine that combining some smoke with glowing teeth got some visually interesting shots. If you’re looking for horror comedy, try something like Evil Dead. If you’re looking for a fun, original sci-fi adventure where you might not like all of the characters but will tolerate them because of some comedic moments, then check out Attack the Block.